In this unit we discuss what is cellular systems and how the frequency and channels are allocated. Medium access control tells how to reduce traffic in the network and we discuss about frequency , time, space and code division multiple access.

The Internet is the network for global data communication with hundreds of millions of users. The reason is quite simple:

You will not receive a single packet as soon as you leave your home network, ie., The network your computer is configured for, and reconnect your computer (wireless or wired) at another place. A host sends an IP packet with the header containing a destination address besides other fields.

The destination address not only determines the receiver of the packet, but also the physical subnet of the receiver.

Routers in the Internet now look at the destination addresses of incoming pack-ets and forward them according to internal look-up tables.

To avoid an explosion of routing tables, only prefixes are stored and further optimizations are applied.

Otherwise a router would have to store the addressed of all computers in the Internet which is obviously not feasible.

As long as the receiver can be reached within its physical subnet it gets the packets as soon as it moves outside the subnet, no packet will reach it anymore.

Thus a host needs a so called topologically correct address.

So moving to a new location would also mean assigning a new address.

Now the problem is that nobody knows of this new address.

It is almost impossible to find a (mobile) host in the Internet which has just changed its address. Especially the Domain Name System (DNS) needs some time before it update its internal tables necessary for the mapping of a logical name to an IP address.

This approach does not work if the mobile node moves quite often. Furthermore the Internet and DNS have not been built for frequent updates.

TO simply the installation

∑     If a new computer is connected to a network DHCP can provide it with all the necessary Information for full system integration into the network e.g:-Addresses of DNS server and Default router Subnet Mask Domain name IP address

DHCP clients send a request to a server to which the server responds.

A client sends requests using MAC broadcasts to reach all devices in the LAN.

A DHCP relay might be needed to forward requests across inter-working units to a DHCP server.

The client broadcasts a DHCP DISCOVER into subnet. There may be relay to forwards this broadcast.

The client can now choose one of the configurations offered.

The client in turn replies to the servers accepting one of the configurations and rejecting the others using DHCP REQUEST.

If a server receives a DHCP REQUEST with a rejection it can free the reserved configuration for other possible clients.

Now the server can free the context stored for the client and offer the configuration again.

The configuration a client from a server is only leased for a certain amount of time it has to be reconfirmed from time to time.

Otherwise the server will be free the configuration. This timeout of configuration helps in the case of crashed nodes or nodes moved away without realizing the context.

DHCP supporting the acquisition of care-of-address for mobile nodes

A DHCP server should located in the subnet of the access point of the mobile note.

DHCP relay should provide forwarding of the Messages.

Provides a protocol for the countries where the calls and IPs are dynamically allotted.

In wireless networks using an infrastructure cells have been defines. within a cell the bse station can reach all mobile nodes.

In -hoc networks each node must be able to forward data for other nodes. At a certain time t1 the network topology consists of five nodes N1 to N5.

Nodes are connected depending upon the current transmission characteristics between them. In this network N4 can receive N1 over a good link.

But N1 receive N4 via a weak link.

Links do not necessarily have the same characteristics in both directions.

N2 receives a signal from N1. At a certain time t2 the network topology consists of five nodes N1 to N5.This situation can change quite fast N1 cannot receive N4 any longer

N4 receives N1 only via a weak link.

But N1 has as asymmetric but bi-directional link to N2 that did not exist before.

The Fundamental differences between wired networks and ad-hoc networks related to routing.

Node A receives a signal from node B.

But this does not tell anything about the quality of the connection in reverse. Node B might

Have a weak link

Even have a better link than the reverse direction.

Routing information collected for one direction is of almost no use for the other direction.

Wired networks too have a redundant links to survive link failures.

There is only some redundancy in wired networks which additionally are controlled by a network administrator.

In ad-hoc networks nobody controls redundancy so there might be many redundant links up to the extreme of a completely meshed topology.

Routing algorithms for wired networks can handle some redundancy but a high redundancy can cause a large computational overhead for routing table updates.

Gives a protocol for configuring the mobiles.

Multicast IP Routing protocols are used to distribute data (for example, audio/video streaming broadcasts) to multiple recipients. Using multicast, a source can send a single copy of data to a single multicast address, which is then distributed to an entire group of recipients.

A multicast group identifies a set of recipients that are interested in a particular data stream, and is represented by an IP address from a well-defined range. Data sent to this IP address is forwarded to all members of the multicast group.

Routers between the source and recipients duplicate data packets and forward multiple copies wherever the path to recipients diverges. Group membership information is used to calculate the best routers at which to duplicate the packets in the data stream to optimize the use of the network.

There are many different multicast protocols and modes of operation, each optimized for a particular scenario. Many of these are still at an early stage of standardization. However, they all operate in the same general way, as follows.

The multicast distribution tree of receiving hosts holds the route to every recipient that has joined the multicast group, and is optimized so that

∑     duplicate copies of packets are kept to a minimum.

This one provides a protocol for sending the call/data from one mobile station to several other stations.

TCP  s reaction to a missing acknowledgement is quite drastic but it is necessary to get rid of congestion quickly.

The behavior shows after the detection of congestion is called Slow start. The sender always calculates a Congestion window for a receiver.

The start size of the congestion window is one segment (TCP Packet). The sender sends one packet and waits for acknowledgement.

It is too dangerous to double the congestion window each time because the steps might become too large. The exponential growth stops at the Congestion Threshold.

Linear increase continues until a time-out at the sender occurs due to a missing acknowledgement or until the sender detects a gap in transmitted data because of continuous acknowledgements for the same packet.

The exponential growth starts once more up to the new congestion threshold then the window grows in Linear fashion.

Can be used in wireless communications too. 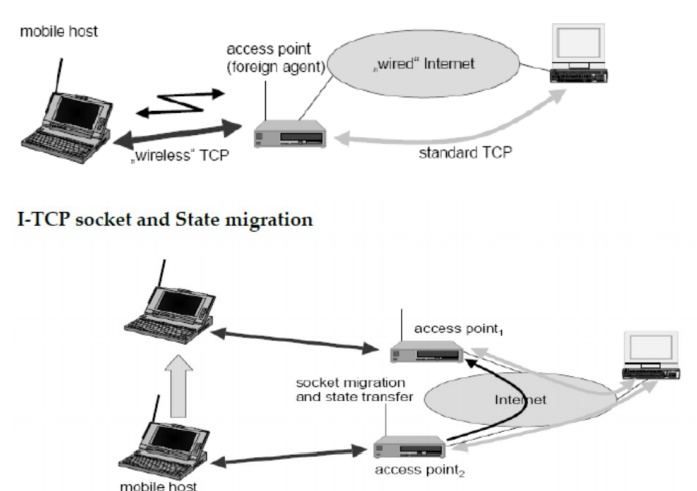 Loss of end-to-end semantics, an acknowledgement to a sender does now not any longer mean that a receiver really got a packet, foreign agents might crash.

No changes in the fixed network necessary, no changes for the hosts (TCP protocol) necessary, all current optimizations to TCP still work

Transmission errors on the wireless link do not propagate into the fixed network simple to control, mobile TCP is used only for one hop, between a foreign agent and a mobile host Therefore, a very fast retransmission of packets is possible, the short delay on the mobile hop is known

The foreign agent buffers all packets with Destination mobile host.

Additionally         snoops  the packet flow in both directions to recognize acknowledgements.

The reason for buffering the packets toward the mobile node is to enable the foreign agent to perform a local transmission in case of packet loss on the wireless link.

The foreign agent buffers every packet until it receives an acknowledgement from the mobile host.

Alternatively the foreign agent could receive a duplicate ACK which also shows the loss of a packet.

·        Retransmits the packet directly from the buer.

·        Performing a much faster retransmission completed to the correspondent host.

·        The time out for acknowledgements can be much shorter because it reflects only the delay of one hop plus processing time.

·        To remain transparent the foreign agent must not acknowledge data to the correspondent host.

·        The correspondent host believe that the mobile host had received the data would violate the end-to end semantic in case of a foreign agent failure.

·        The foreign agent can filter the duplicate acknowledgements to avoid unnecessary retransmissions of data from the correspondent host.

If the foreign agent now crashes the time-out of the correspondent host still works and triggers a retransmission.

The foreign agent may discard duplicates of packets already retransmitted locally and acknowledged by the mobile host.

This avoids unnecessary traffic on the wireless link.

Reduction of the congestion threshold

A sender receiving continuous acknowledgements for the same packets. This informs the sender of two things. One is that the receiver got all packets up to the acknowledged packet in sequence.

The other reason for activating slow start is a time-out due to a missing acknowledgement. TCP using Fast Retransmit / Fast Recovery interprets this congestion in the

Mobile hosts can be disconnected for a longer time

no packet exchange possible, e.g., in a tunnel, disconnection due to overloaded cells or mux. with higher priority traffic TCP disconnects after time-out completely

MAC layer is often able to detect interruption in advance MAC can inform TCP layer of upcoming loss of connection TCP stops sending, but does not assume a congested link MAC layer signals again if reconnected

TCP on mobile host has to be changed, mechanism depends on MAC layer

Scheme is independent of data

Already in use _ i-mode in Japan

_ Local retransmissions and acknowledgements Additionally on the application layer

_ States that explicit congestion notification cannot be used In contrast to 2.5G/3G recommendations!

Used to differentiate the 2.8G/3G over the TCP

o   Fine tuned for Mobile usage over the TCP

o Almost all the Devices Makes use of this layer for sending the data o Used for the Mobile devices that are designed these days either2.5/3G