In this unit we discuss Digital cellular networks are the segment of the market for mobile(GSM) and wireless devices which are growing most rapidly. They are the wireless extensions of traditional PSTN or ISDN networks and allow for seamless roaming with the same mobile phone nation or even worldwide. Today, these systems are mainly used for voice traffic. However, data traffic is continuously growing and, therefore, this chapter presents

A useful service for very simple message transfer is the short message service (SMS) which offers transmission of messages of up to 160 characters.

SMS messages do not use the standard data channels of GSM but exploit unused capacity in the signalling channels.

Sending and receiving of SMS is possible during data or voice transmission. SMS was in the GSM standard from the beginning

Another non-voice tele service is group 3 fax, which is available worldwide.

In this service, fax data is transmitted as digital data over the analog telephone network according to the ITU-T standards T.4 and T.30 using modems. 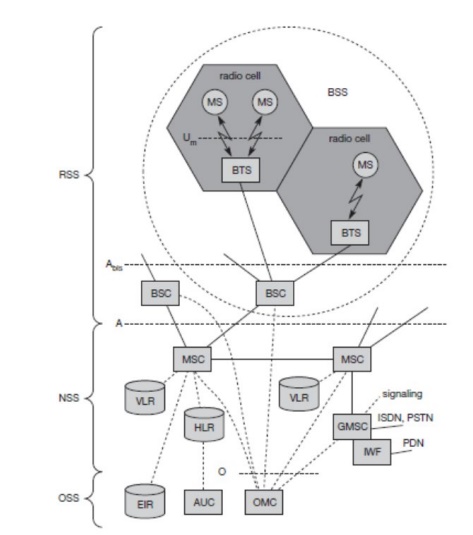 The MS comprises all user equipment and software needed for communication with a GSM network.

Provides an interrupted connection between two or several users

An MS consists of user independent hard- and software and of the subscriber identity module (SIM), which stores all user-specific data that is relevant to GSM.3 While an MS can be identified via the international mobile equipment identity (IMEI), a user can personalize any MS using his or her SIM,

Without the SIM, only emergency calls are possible.

The SIM card contains many identifiers and tables, such as card-type, serial number, a list of subscribed services, a personal identity number (PIN), a PIN unblocking key (PUK), an authentication key Ki, and the international mobile subscriber identity (IMSI)

Cellular systems require handover procedures, as single cells do not cover the whole service area. The smaller the cell size and the faster the movement of a mobile station through the cells The more handovers of ongoing calls are required. A handover should not cause a cut-off, also called call drop. GSM aims at maximum handover duration of 60ms. 2 Basic Reasons for a Handover

The mobile station moves out of the range of a BTS of a certain antenna of a BTS respectively.

The received signal level decreases continuously until it alls below the minimal requirements or communication.

The error rate maygrow due to intererance, the distance to the BTS may be too high.

All these effects may diminish the quality of the radio link and make radio transmission impossible in the near future.

The wired infrastructure (MSC, BSC) may decide that the traffic in one cell is too high and shift some MS to another cells with a lower load. Handover may be due to load balancing.

Types of Handover in GSM 4 Possible Handover Scenarios in GSM

1. Intra-cell handover: o Within a cell

o Narrow band interference could make transmission at a certain frequency impossible. o The BSC could then decide to change the carrier frequency.

o The mobile station moves from one cell to another, but stays within the control of the same BSC.

o The BSC then performs a handover, assigns a new radio channel in the new cell and releases the old one .

o GSM also has to perform handovers between cells controlled by different BSCs. o This handover then has to be controlled by the MSC.

o A handover could be required between two cells belonging to different MSCs. o Now both MSCs perform the handover together.

Necessary Information for a Handover

Measurement reports are sent by the MS about every half second and contain the quality of the current link used for transmission as well as the quality of certain channels in neighboring cells ( the BCCHs). 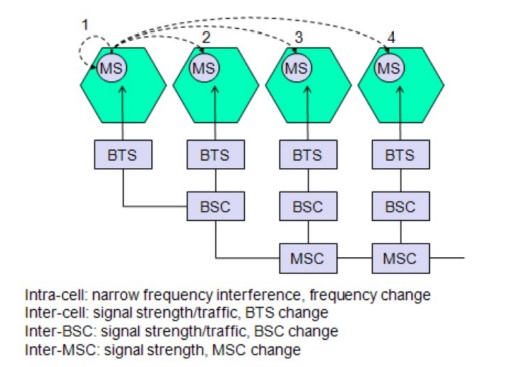 The SIM stores personal, secret data and is protected with a PIN against unauthorized use.

The security services offered by GSM are

The authentication of a valid user for the SIM. The user needs a secret PIN to access the SIM.

The next step is the subscriber authentication. This step is based on a challenge-response scheme.

All user-related data is encrypted.

After authentication BTS and MS apply encryption to

This confidentiality exists only between MS and BTS.

All data is encrypted before transmission, and user identifiers.

GSM transmits a temporary identifier (TMSI), which is newly assigned by the VLR after each location update.

The actual recording takes place on a recording system with software for the management of calls and security of recordings. Most call recording software applications rely on an analogue signal via either a call recording adapter or a telephony board.

Digital lines cannot be recorded unless the call recording system can capture and decode the proprietary digital signaling, which some modern systems can. Sometimes a method is supplied with a digital PBX that can process the proprietary signal (usually a conversion box) before being channeled to a computer for recording. Alternatively a hardware adapter can be used on a telephone handset as the digital signal is converted at that point to analogue.

VoIP Recording is usually restricted to streaming media recorders or software developed by the soft phone or IP PBX creator. There are also solutions which use packet capture technology to passively record VoIP phone calls on the LAN.

Hardware is required to make the voice signal available to the computer equipment. Some of today's call recording software is sold as a turn-key solution with hardware.

Direct recording of mobile phone calls requires a hardware adapter connected to the handset. There are many other ways to record mobile phone calls. One approach is to route calls via a new PBX system linked to the recorder. However, such systems are typically expensive to purchase and change the way that calls are made, incurring running costs. Another approach links directly into existing recording systems from a PDA phone. Both of these approaches allow recordings to be time stamped, often required for legal reasons. Recording directly onto mobile devices does provide a legally valid recording in many countries.

∑     Manages the Call whenever the user seems busy

∑     Service provided(data) can be monitored in a fair manner

MNP is a boon to the customer as he is allowed to keep the same mobile number even he switches over to other operator.

Applicable only for mobile Numbers

All mobile users can use MNP to get best tariff and network coverage without changing the number.

Voice over Internet protocol is simply the transmission of voice traffic over ip ased networks. Mobile VOIP is delivered by a third party service provider a WIFI or 3G network cellular network that a mobile device is connected to.

Mobile VOIP service providers typically require a user to download software onto their mobile device in order to gain access to their service.

Voip sends your calls across the internet

Phone calls are sent through VOIP phone adaptor to regular or cordless telephone.

GPRS support nodes (GSN) and are in fact routers.

All GSNs are integrated into the standard GSM architecture, and may new interfaces have been defined .

This node contains routing information for GPRS users, performs address conversion, and tunnels data to a user via encapsulation.

The GGSN is connected to external networks (e.g., IP or X.25) via the Gi interface and transfers packets to the SGSN via and IP-based backbone network (Gn interface).

The other new element is the serving GPRS support node (SGSN) which supports the MS via the Gb interface.

The SGSN is connected to a BSC via frame relay and is basically on the same hierarchy level as an MSC.

The GR, which is typically a part of the HLR, stores all GPRS relevant data. GGSNs can be compared with home and foreign agents, respectively, in a mobile IP network.

As shown in figure below, packet data is transmitted form a PDN, via the GGSN and SGSN directly to the BSS and finally to the MS.

The MSC, which is responsible for data transport in the traditional circuit switched GSM, is only used for signaling in the GPRS scenario.

Before sending any data over the GPRS network, an MS must attach to it, following the procedures of the mobility management.

For each MS, a GPRS context is set up and stored in the MS and in the corresponding SGSN. This context comprises the status of the MS (which can be ready, idle, or standby), the CKSN, a flag indicating if compression is used, and routing data (TLLI, the routing area RA, a cell identifier and a packet data channel, PDCH, identifier).

Besides attaching and detaching mobility management also comprises functions for authentication, location management, and ciphering (here, the scope of ciphering lies between MS and SGSN, which is more than in standard GSM).

In idle mode an MS is not reachable and all contexts is deleted.

In the standby state only movement across routing areas is updated to the SGSN but not changes of the cell. Permanent paging.

The update procedure in standby mode is a compromise. Only in the ready state every movement of the MS is indicated to the SGSN. 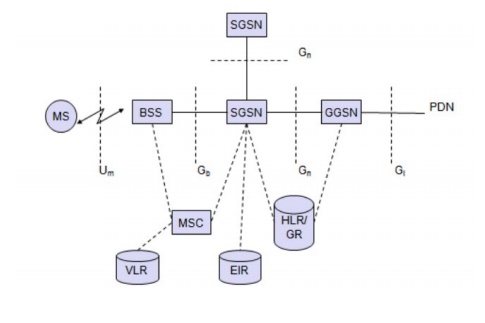 Provides Data connection for several Mobile Stations from the Base Stations.

As you travel, each network you access data or phone calls through sends a bill to your carrier back home. One your bills start coming in, your carrier mails it to you. Sometimes it can take several months to reconcile all the charges you've racked up while traveling. I've completely switched my travel calls to You Roam since I travel a lot. It lets you make and receive calls on your own number over Wi-Fi, 3G or a local sim anywhere in the world for free or really cheap.

Allows the network provider companies, to process their billing procedures with their code of conduct.

∑     This is mainly used in the Voice IP call features