Wired Technologies and its types

The means through which data is transferred from one place to another is called transmission or communication media.

There are three common types of bounded media in the data transmission. They are

A twisted pair consists of two conductors (normally copper), each with its own plastic insulation, twisted together. One of these wires is used to carry signals to the receiver, and the other is used only as ground reference. In addition to the signal sent by the sender on one of the wires, interference (noise) and crosstalk may affect both wires and create unwanted signals.

Twisted Pair is of two types: 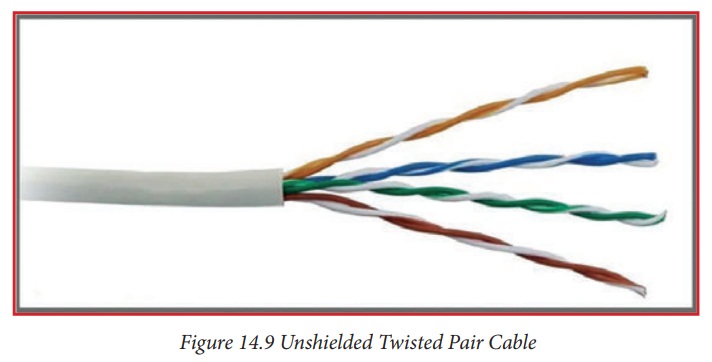 It consists of two insulating copper wires (1mm thick). The wires are twisted together in a helical form to reduce electrical interference from similar pair. Identification is the reason behind coloured plastic insulation.

• It has high speed capacity.

• Higher grades of UTP are used in LAN technologies like Ethernet.

• Bandwidth is low when compared with Coaxial Cable.

This cable has a metal foil or braided-mesh. Electromagnetic noise penetration is prevented by metal casing. Shielding also eliminates crosstalk. It is faster than unshielded and coaxial cable.

• It can be used for Analog or Digital transmission

• It increases the signalling rate.

• It is difficult to manufacture

• Coaxial is called by this name because it contains two conductors that are parallel to each other.

• Copper is used in this as a central conductor. It is surrounded by PVC installation.

• Outer metallic wrapping is used as a shield against noise and as a second conductor which completes the circuit.

• The outer conductor is also encased in an insulating sheath. The outermost part is the plastic cover which protects the whole cable.

• The the most common coaxial standards are: 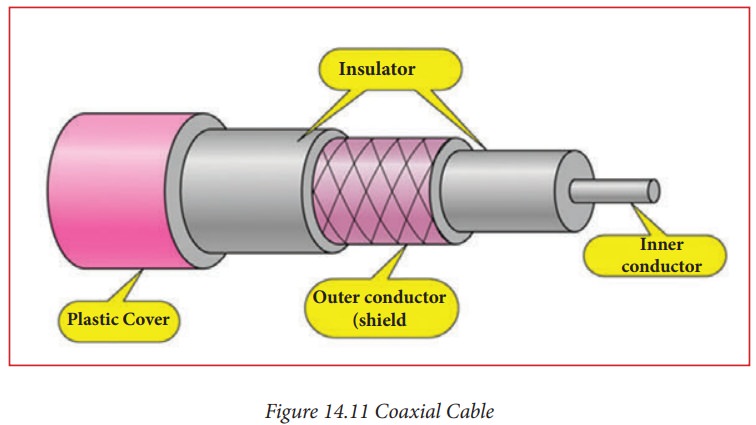 • It is used in long distance telephone lines.

• It transmits digital signals at a very high rate of 10Mbps.

It has higher noise immunity.

• It transmits data without distortion.

• If the shield is imperfect, it can lead to grounded loop.

A fibre-optical cable is made of glass or plastic and transmits signals in the form of light. In fibre optical cable, light moves only in one direction. For two way communication to take place a second communication must be made between the two devices. Optical fibres use reflection to guide light through a channel. A glass or plastic core is surrounded by a cladding of less dense glass or plastic. The difference in density of the two materials must be such that a beam of light moving through the core is reflected off the cladding instead of being refracted into it.

There are three types of connectors for fibre-optic cables, as shown in the figure below. 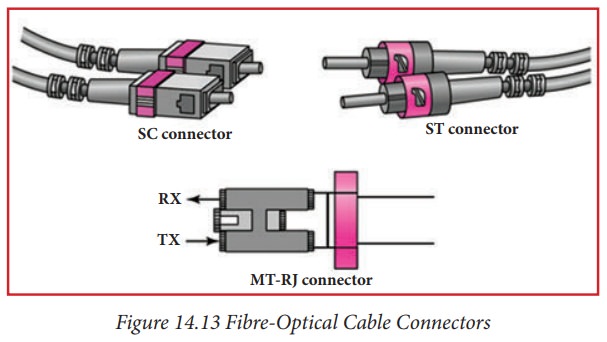 • It is resistant to corrosion.

• It shows greater immunity to tapping.

• It has unidirectional light propagation.