SMS is commonly referred to as "text messaging,". Voice mail system can be thought as a message box for phone user to store voice messages and retrieve it through telephone.

SMS stands for Short Message Service. It is commonly referred to as "text messaging,". It is a service for sending short messages of up to 160 characters (224 characters if using a 5-bit mode) to mobile devices, including cellular phones, smartphones and PDAs.

Voice mail system can be thought as a message box for phone user to store voice messages and retrieve it through telephone. User can divert all his calls to his voice mail system when he wishes so. 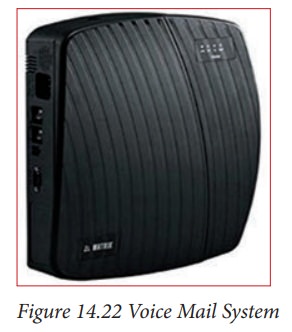 Answering machine is usually suitable for home use for single line, while voice mail system is more suitable for office use where there are multiple telephone connections as well as extensions through EPABX.

E-mail (electronic mail) is the exchange of computer-stored messages by telecommunication. E-mail messages are usually encoded in ASCII text. However, you can also send non-text files, such as graphic images and sound files, as attachments sent in binary streams. E-mail was one of the first uses of the Internet and is still the most popular use. A large percentage of the total traffic over the Internet is e-mail. E-mail can also be exchanged between online service provider users and in networks other than the Internet, both public and private.

Chat is a text-based communication that is live or in real-time. For example, when talking to someone in chat any typed text is received by other participants immediately.

For example, a point-to-point (two-person) video conferencing system works much like a video telephone. Each participant has a video camera, microphone and speakers mounted on his or her computer. As the two participants speak to one another, their voices are carried over the network and delivered to the other's speakers and whatever images appear in front of the video camera appear in a window on the other participant's monitor.

Multipoint videoconferencing allows three or more participants to sit in a virtual conference room and communicate as if they were sitting right next to each other.