The term ‘Wildlife’ includes animals of any habitat in nature. Wild animals are non-domesticated animals and include both vertebrates (fish, amphibians, reptiles, birds and mammals) and invertebrates (bees, butterflies, moths etc.).

The term ‘Wildlife’ includes animals of any habitat in nature. Wild animals are non-domesticated animals and include both vertebrates (fish, amphibians, reptiles, birds and mammals) and invertebrates (bees, butterflies, moths etc.). India has a rich and diversified wildlife. The Indian fauna consists of about 81,251 species of animals out of the world’s total of about 1.5 million species.

Our country is home to tigers, lions, leopards, snow leopards, pythons, wolves, foxes, bears, crocodiles, rhinoceroses, camels, wild dogs, monkeys, snakes, antelope species, deer species, varieties of bison and the mighty Asian elephant. Hunting, poaching, deforestation and other anthropogenic interferences in the natural habitats have caused extinction of some species and many are facing the danger of extinction. 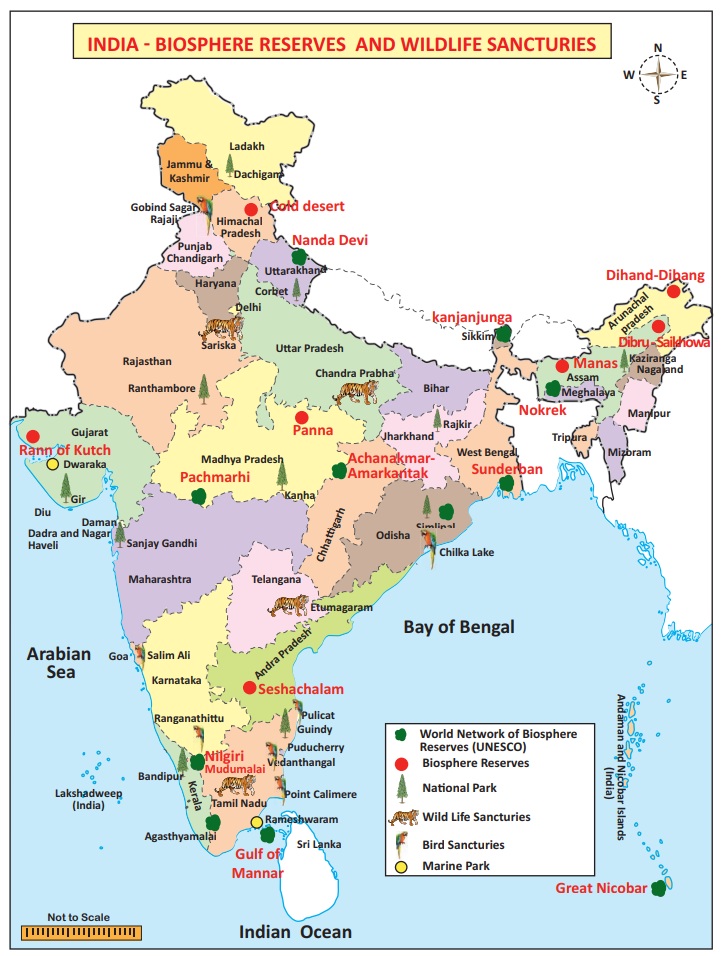 The Indian Board for Wildlife (IBWL)

It was constituted in 1952 to suggest means of protection, conservation and management of wildlife to the government.

The Government of India enacted Wildlife (Protection) Act in 1972 with the objective of effectively protecting the wild life of the country and to control poaching, smuggling and illegal trade in wildlife and its diversities.

To preserve the country’s rich and diverse wildlife a network of 102 National Parks and about 515 Wildlife Sanctuaries across the country have been created.

The Indian government has established 18 Biosphere Reserves in India which protect large areas of natural habitat which often include few National Parks with buffer zones that are open to some economic uses.

Project Tiger was launched in April 1973 with the aim to conserve tiger population in specifically constituted “Tiger Reserves” in India.

Eleven of the eighteen biosphere reserves (Gulf of Mannar, Nandadevi, the Nilgiris, Nokrek, Pachmarhi, Simlipal, Sundarbans Agasthiyamalai, Great Nicobar, Kanjanjunga and Amarkantak) of India fall under the list of Man and Biosphere programme of UNESCO.