The word ‘monsoon’ has been derived from the Arabic word ‘Mausim’ which means ‘season’.

The word ‘monsoon’ has been derived from the Arabic word ‘Mausim’ which means ‘season’. Originally, the word ‘monsoon’ was used by Arab navigators several centuries ago, to describe a system of seasonal reversal of winds along the shores of the Indian Ocean, especially over the Arabian Sea. It blows from the south-west to north-east during summer and from the north-east to south-west during winter.

Meteorologists have developed a number of concepts about the origin of monsoons. According to the Dynamic concept, Monsoon wind originates due to the seasonal migration of planetary winds and pressure belts following the position of the sun. During summer solstice, the sun’s rays fall vertically over the Tropic of cancer. Therefore, all the pressure and wind belts of the globe shift northwards. At this time, Inter -Tropical Convergence Zone (ITCZ) also moves northward, and a major part of Indian landmass comes under the influence of southeast trade winds. While crossing equator this wind gets deflected and takes the direction of southwest and becomes south-west monsoon. During the winter season, the pressure and wind belts shift southward, thereby establishing the north-east monsoon (trade winds) over this region. Such systematic change in the direction of planetary winds is known as monsoon.

The meteorologists recognize the four distinct seasons in India. They are;

During this period, the vertical rays of the sun falls over tropic of capricorn which is far away from India. Hence, India receives the slanting sun’s rays which results in low temperature. The cold weather season is characterized by clear skies, fine weather, light northerly winds, low humidity and large day time variations of temperature. During this season a high pressure develops over north India and a north-westerly wind blows down the Indus and Ganges valleys. In south India, the general direction of wind is from east to west.

The rain during this season generally occurs over the Western Himalayas, Tamil nadu and Kerala. Western disturbances and associated trough in westerlies are main rain bearing system in northern part of the country. The jet stream plays a dominant role in bringing these disturbances to India. Western disturbances cause rainfall in Punjab, Haryana and Himachal Pradesh, and snowfall in the hills of Jammu and Kashmir. This rainfall is very useful for the cultivation of winter wheat.

During this season, the vertical rays of the sun falls over the peninsular India. Hence, there is a steady increase in temperature from south to north. It is practically hot and dry in the entire country in the initial part of this season. Weather over the land areas of the country is influenced by thunderstorms associated with rain and sometimes with hail mostly in the middle and later part.

During this season, temperature starts increasing all over the country and by April, the interior parts of south India record mean daily temperatures of 30°C–35°C. Central Indian land mass becomes hot with day-time maximum temperature reaching about 40°C at many locations.

Because of the atmospheric pressure conditions, the winds blow from southwest to northeast direction in Arabian Sea and Bay of Bengal. They bring pre monsoon showers to the west coast during the month of May. There are few thunder showers called “Mango Showers” which helps in quick ripening of mangoes along the coast of Kerala and Karnataka.

“Norwesters ” or “Kalbaisakhis” are the local storms with thunder that blow from north western part and rain lasting for short durations. It occurs over the eastern and north eastern parts over Bihar, West Bengal and Assam during April and May. They approach the stations from the northwesterly direction. 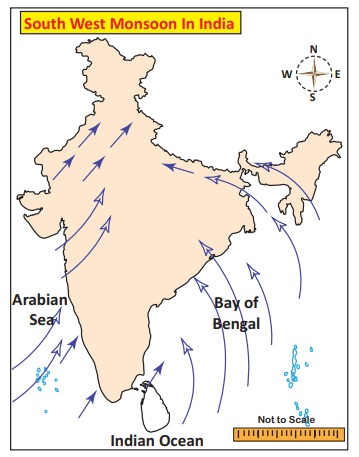 Prior to the onset of the southwest monsoon, the temperature in north India reaches upto 46°C. The sudden approach of monsoon wind over south India with lightning and thunder is termed as the ‘break’ or ‘burst of monsoon’. The monsoon wind strikes against the southern tip of Indian land mass and gets divided into two branches. One branch starts from Arabian sea and the other from Bay of Bengal.

The Arabian sea branch of southwest monsoon gives heavy rainfall to the west coast of India as it is located in the windward side of the Western Ghats. The other part which advances towards north is obstructed by Himalayan Mountains and results in heavy rainfall in north. As Aravalli Mountain is located parallel to the wind direction, Rajasthan and western part do not get much rainfall from this branch.

The Bay of Bengal branch moves towards northeast India and Myanmar. This wind is trapped by a chain of mountains namely Garo, Khasi and Jaintia are mainly responsible for the heaviest rainfall caused at Mawsynram located in Meghalaya. Later on, this wind travel towards west which results in decrease in rainfall from east to west. Over all about 75% of Indian rainfall is received from this monsoon.

The southwest monsoon begins to retreat from north India by the end of September due to the southward shifting pressure belts. The southwest monsoon wind returns from Indian landmass and blows towards Bay of Bengal. The coriolis force deflects this wind and makes it to blow from northeast. Hence, it is known as Northeast monsoon or Post- monsoon season. The season is associated with the establishment of the north-easterly wind system over the Indian subcontinent. Andhra Pradesh, Tamil nadu, Kerala and south interior Karnataka receive good amount of rainfall accounting for 35% of their annual total. Many parts of Tamil nadu and some parts of Andhra Pradesh and Karnataka receive rainfall during this season due to the storms forming in the Bay of Bengal. Large scale losses to life and property occur due to heavy rainfall, strong winds and storm surge in the coastal regions. The day time temperatures start falling sharply all over the country. 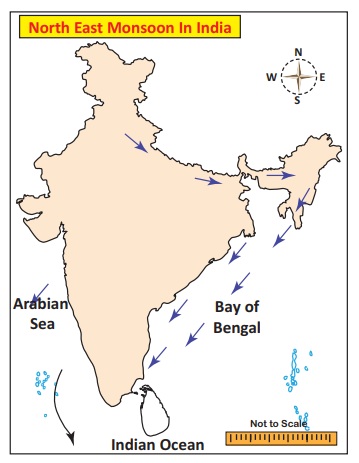