Wireless Fidelity is commonly known as Wi-Fi, developed on IEEE 802.11 standards, is commonly used technology development in wireless communication. As the names indicate, WI-FI provides wireless access to applications and data across a radio network. WI-FI sets up many ways to build up a connection between the transmitter and the receiver such as DSSS, FHSS, IRInfrared and OFDM.

Wi-Fi provide its users with the authorization of connecting to the Internet from any place such as their home, office or a public place without the hassles of plugging in the wires. Wi-Fi is faster than the conventional modem for accessing information over a huge network. With the help of different amplifiers, the users can easily alter their location without interference in their network access. Wi-Fi devices are yielding with each other to grant well-organized access of information to the user. Wi-Fi location, the users can attach to the wireless network is called a Wi-Fi hotspot. Through the Wi-Fi hotspot, the user can evenimprove their home business as accessing information through Wi-Fi is easy Accessing a wireless network through a hotspot in some cases is free of cost while in some it may carry extra charges. Many set of Wi-Fi devices such as PCI, miniPCI, USB, Cardbus and PC card, ExpressCard make the Wi-Fi experience suitable and enjoyable for the users. Distance from a wireless network can decrease the signal strength to quite an extent; some devices such as Ermanno Pietrosemoli and EsLaRed of Venezuela Distance are used for amplifying the signal power of the network. These devices create embedded systems that communicate with any other node on the Internet.

Wi-Fi uses radio networks to broadcast data between its nodes. Such networks are made up of cells that grant coverage across the network. The further the number of cells, the larger and stronger is the coverage on the radio network. The radio technology is a absolute package deal as it offers a secure and reliable connectivity. Radio bands such as 2.4GHz and 5GHz depend on wireless hardware such Ethernet protocol and CSMA. Originally, Phase Shift Keying (PSK), a modulation method for transmission of data was used, but now it has been replaced with CCK. Wi-Fi uses many spectrum such as FHSS and DSSS. The most accepted Wi-Fi technology such as 802.11b operates on the range of 2.40 GHz up to 2.4835 GHz band. This provides a complete platform for operating Bluetooth strategy, cellular phones, and other scientific equipments. While 802.11a technology has the range of 5.725 GHz to 5.850 GHz and provides up to 54 Mbps in speed. 802.11g technology is even enhanced as it cover three non-overlapping channels and permit PBCC. 802.11e technology takes a pale lead by providing outstanding streaming quality of video, audio, voice channels etc. 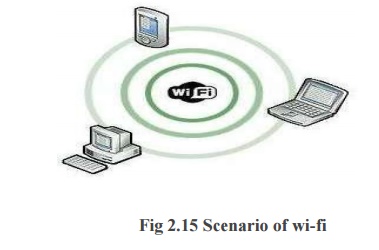 Wi-Fi communication devices are extended forms of radios used for cell phones and walkie-talkies: they simultaneously transmit and receive radio waves and convert 1s to 0s into the radio waves along with reconverting the radio waves into 1s and 0s, however the Wi-Fi radios enjoy some exceptional features.

Manufacturers are building wireless network adapters into most laptops. The price of chipsets for Wi -Fi continues to drop, making it an economical networking option included in even more devices.

Different competitive brands of access points and client network-interfaces can inter-operate at a basic level of service. Products designated as "Wi-Fi Certified" by the Wi-Fi Alliance are backwards compatible. Unlike mobile phones, any standard Wi-Fi device will work anywhere in the world.

Spectrum assignments and operational limitations are not consistent worldwide: most of Europe allows for an additional two channels beyond those permitted in the US for the 2.4 GHz band (1–13 vs. 1–11), while Japan has one more on top of that (1–14). As of 2007, Europe is essentially homogeneous in this respect.

A Wi-Fi signal occupies five channels in the 2.4 GHz band. Any two channel numbers that differ by five or more, such as 2 and 7, do not overlap. The oft-repeated adage that channels 1, 6, and 11 are the only non-overlapping channels is, therefore, not accurate. Channels 1, 6, and 11 are the only group of three non-overlapping channels in the U.S. In Europe and Japan using Channels 1, 5, 9, and 13 for 802.11g and 802.11n is recommended.

Physical security is a major component of a wired LAN security solution.

Wired network‘s equipment can be locked inside offices. Wireless networks cannot offer the same level of physical security, however, and therefore must depend on additional authentication routines to ensure that users accessing the network are authorized to do so. Authentication is a necessary prerequisite to association because only authenticated users are authorized to use the network. (In practice, though, many access points are configured for "open-system" mode and will authenticate any station.)

WiFi hotspots can be open or secure. If a hotspot is open, then anyone with a WiFi card can access the hotspot. If it is secure, then the user needs to know a WEP key to connect. WEP stands for Wired Equivalent Privacy. WEP is an encryption system for the data that 802.11 sends through the air. Encryption system prevents any non-authorized party from reading or changing data. Specifically, it is the process of encoding bit stream in such a way that only the person (or computer) with the key (a digital sequence) can decode it.