Wireless networks can exhibit two different basic system architectures as infrastructure-based or ad-hoc. Figure shows the components of an infrastructure and a wireless part as specified for IEEE 802.11. Several nodes, called stations (STAi), are connected to access points (AP). Stations are terminals with access mechanisms to the wireless medium and radio contact to the AP. The stations and the AP which are within the same radio coverage form a basic service set (BSSi). The example shows two BSSs – BSS1 and BSS2 – which are connected via a distribution system. A distribution system connects several BSSs via the AP to form a single network and thereby extends the wireless coverage area. This network is now called an extended service set (ESS) and has its own identifier, the

ESSID. The ESSID is the ‗name‘ of a network and is used to separate different networks. Without knowing the ESSID (and assuming no hacking) it should not be possible to participate in the WLAN. The distribution system connects the wireless networks via the APs with a portal, which forms the interworking unit to other 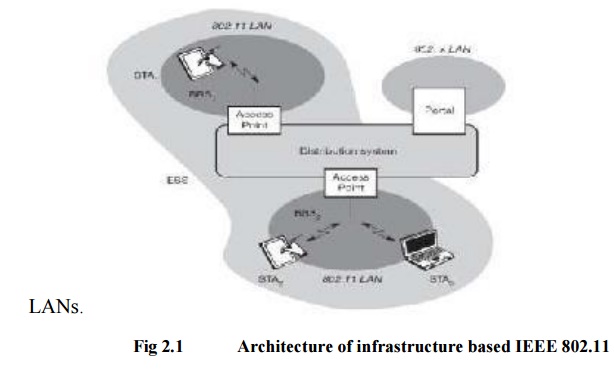 The architecture of the distribution system is not specified further in IEEE 802.11. It could consist of bridged IEEE LANs, wireless links, or any other networks. However, distribution system services are defined in the standard Stations can select an AP and associate with it. The APs support roaming (i.e., changing access points), the distribution system handles data transfer between the different APs. APs provide synchronization within a BSS, support power management, and can control medium access to support time-bounded service. In addition to infrastructure-based networks, IEEE 802.11 allows the building of ad-hoc networks between stations, thus forming one or more independent BSSs (IBSS) as shown in Figure 7.4. In this case, an IBSS comprises a group of stations using the same radio frequency. Stations STA1, STA2, and STA3 are in IBSS1, STA4 and STA5 in IBSS2. This means for example that STA3 can communicate directly with STA2 but not with STA5. Several IBSSs can either be formed via the distance between the IBSSs or by using different carrier frequencies (then the IBSSs could overlap physically). IEEE 802.11 does not specify any special nodes that support routing, forwarding of data or exchange of topology information as, e.g., HIPERLAN 1 or Bluetooth. 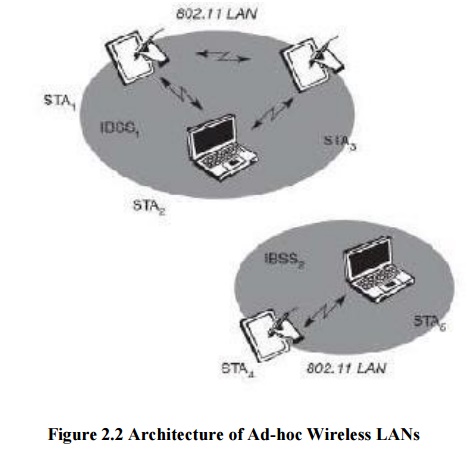