Bluetooth is a wireless technology standard for exchanging data over short distances (using short-wavelength radio transmissions in the ISM band from 2400–2480 MHz) from fixed and mobile devices, creating personal area networks (PANs) with high levels of security. Different type of network is needed to connect different small devices in close proximity (about 10 m) without expensive wiring or the need for a wireless infrastructure .Bluetooth is a new standard suggested by a group of electronics manufacturers that will allow any sort of electronic tools from computers and cell phones to keyboards and headphones to make its own connections, without wires, cables or any direct action from a user. A key distinction with other offered wireless technologies is that bluetooth enables combined usability models based on functions provided by different devices. Bluetooth was invented in1994 by L.M.Ericson of Sweden. The name is attributed to Harald Bluetooth was king of Denmark around the turn of the last millennium. Choosing this name for the standard indicates how important companies from the Baltic region (nations including Denmark, Sweden, Norway and Finland) are to the communications industry.

As famous as the name is the bluetooth symbol. Bluetooth icon can be recognized by all. The main strength of bluetooth is its ability to simultaneously handle both data and voice transmissions. It is capable of supporting one asynchronous data channel and up to three synchronous voice channels, or one channel sup-porting both voice and data. This ability combined with ad hoc device connection and automatic service discovery make it a superior solution for mobile devices and Internet applications. This grouping allows such novel solutions as a mobile hands-free headset for voice calls, print to fax capability, and automatically synchronizing PDA, laptop, and cell phone address book applications.

It is Wireless and automatic

It operates on 79 channels in 2.4GHZ band with 1MHZ carrier spacing Pi-conet is the important terminology

When there is just one Master and one Slave the system is called a Point to Point connection. When many Slaves are connected to one Master, the system is called a Point to Multipoint. Both these types are referred to as a Piconet and all follow the frequency hopping sequence of the Master. The Slaves in the Piconet only have links to the Master and no direct links between Slaves.

Two parameters are needed for the formation of piconet

Hopping pattern of the radio it wishes to connect.

Phase within the pattern i.e. the clock offset of the hops.

The global ID defines the hopping pattern. The master shares its global ID and its clock offset with the other radios which become slaves. The global ID and the clock parameters are exchanged using a FHS (Frequency Hoping Synchronization) packet. 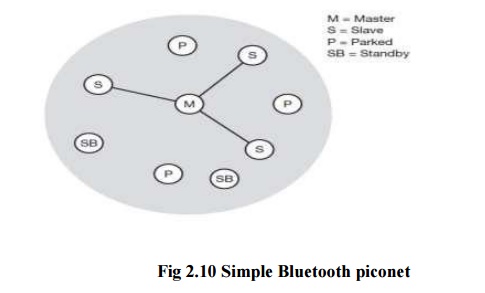 There is no difference between terminals and base stations, two or more devices can form a piconet. The unit establishing the piconet repeatedly becomes the master, all other devices will be slaves. The hopping pattern is determined by the device ID, a 48-bit worldwide unique identifier. The phase in the hopping pattern is determined by the master‘s clock. After altering the interior clock according to the master a device may take part in the piconet. All active devices are assigned a 3-bit active member address (AMA). All parked devices use an 8-bit parked member address (PMA). Devices in stand-by do not need any address. All users within one piconet have the same hopping sequence and share the same 1 MHz channel. As more users join the piconet, the throughput per user drops quickly. 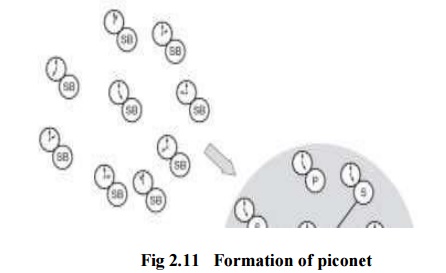 The left over devices in the piconet continue to communicate normal. 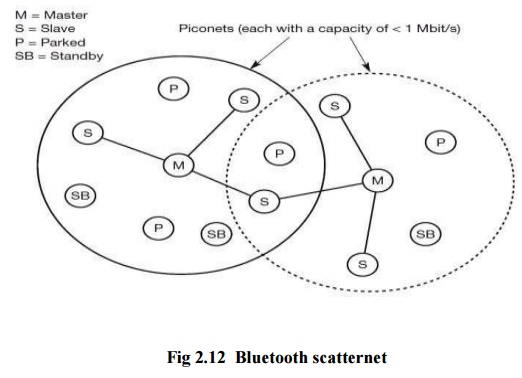 A master can also go away from its piconet and act as a slave in another piconet. It is obviously not possible for a master of one piconet to act as the master of another piconet as this would direct to identical behavior. As soon as a master leaves a piconet, all traffic within this piconet is balanced until the master returns. Communication between different piconets takes place by devices jumping back and forth between these nets. If this is done occasionally, for instance, isochronous data streams can be forwarded from one piconet to another. On the other hand, scatternets are not yet supported by all piconet. 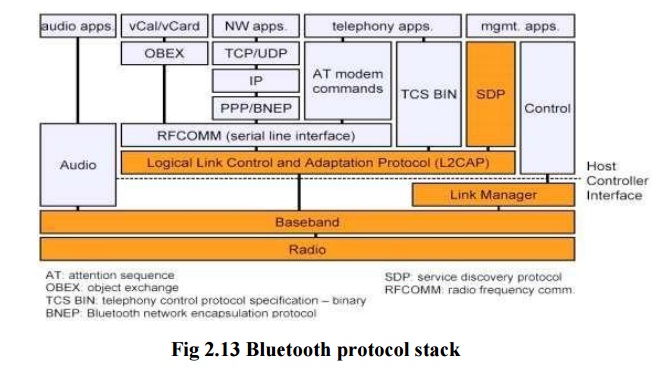 The Bluetooth protocol stack can be divided into:

Core Specification -Deals with the lower layers of the architecture and describes how the technology works. It describe the protocol from physical to data link layer along with management functions.

Profile Specification -Focuses on how to build interoperating devices using the core technology.

Host Controller Interface (HCI): provides an interface method for accessing the Bluetooth hardware capabilities. It contains a command interface, which acts between the Baseband controller and link manager

OBEX(OBject EXchange) : Session-layer protocol for the exchange of objects, providing a model for object and operation representation

RFCOMM: a reliable transport protocol, which provides emulation of RS232 serial ports over the L2CAP protocol

Different types of links can be established between master and slave. Two link types have been defined they are:

2.Asynchronous Connection-Less (ACL): It Support symmetrical and asymmetrical, packet-switched, point-to-multipoint connections. It is typically used for data transmission .Up to 433.9 kbit/s are used in symmetric or 723.2/57.6 kbit/s are used in asymmetric. The master uses polling. A slave may answer if it has used the preceeding slot.

Standby : The State in which Bluetooth device is inactive, radio not switched on, enable low power operation.

Inquiry: The State in which device tries to discover all Bluetooth enabled devices in the close vicinity.

Active –It participates in piconet It Listens, transmits and receives frames

Sniff – It only listens on specified slots

Hold –It does not support ACL frames. It has reduced power status. It May still participate in SCO exchanges

There are three modes of security for Bluetooth access between two devices.

The following are the three basic security services specified in the Bluetooth standard:

Authentication : It verify the identity of communicating devices. User authentication is not provided natively by Bluetooth.

Confidentiality : It prevent information compromise caused by eavesdropping by ensuring that only authorized devices can access and view data.

Authorization :It allow the control of resources by ensuring that a device is authorized to use a service before permitting it to do so.