Which patients are suitable candidates for AIHD?

The indications and contraindications for AIHD are listed in Table 51.2.

Which patients are suitable candidates for AIHD?

The indications and contraindications for AIHD are listed in Table 51.2.

The essential criteria are an anticipated blood loss greater than 1,000 mL and a starting Hct of 36% or greater. Routine use of AIHD has been described for a wide variety of cases, including major urologic surgery, orthopedics, gynecologic surgery, plastic and reconstructive surgery, neurosurgery (brain and tumor resection), and cardiotho-racic surgery. Reduction in homologous blood usage has been reported to vary from 18% to 90%. Age per se is not a contraindication to hemodilution, and its use has been described in both the elderly and pediatric populations. 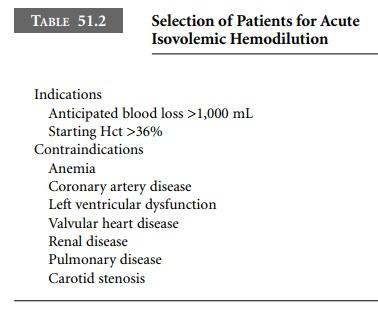 Significant pre-existing myocardial or brain disease represents a contraindication to isovolemic hemodilution because myocardial ischemia and cerebral hypoxia are its major associated complications. Coagulopathies emanating from reduced factor levels may be exacerbated by dilutional effects.