The major controversies regarding intraoperative cell sal-vage involve its use in oncologic surgery, and in contaminated trauma cases.

The major controversies regarding intraoperative cell sal-vage involve its use in oncologic surgery, and in contaminated trauma cases. In both situations, questions arise concerning the possibility of intravascular dissemination of unwanted material—in one case tumor cells, in the other case bacteria—by the use of cell salvage. 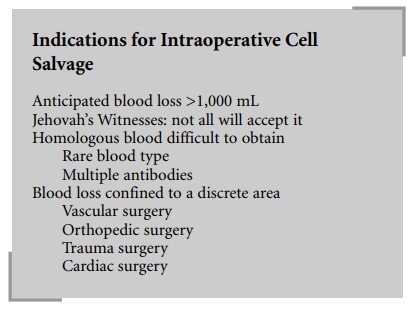 However, it has not been demonstrated that transfusion of malignant cells results in dissemination of the tumor. In many forms of cancer, tumor cells may be recovered from blood despite the fact that blood-borne spread does not occur. There is particular reason for wishing to avoid the use of homolo-gous transfusion in oncologic surgery. Homologous trans-fusions have been shown to produce an immunosuppressive effect, resulting in earlier tumor recurrence and decreased survival times in patients with some forms of cancer. Intraoperative cell salvage may be advantageous in such cases. One group of studies has looked at outcome of cell salvage in patients undergoing major urologic oncologic procedures. No evidence of blood-borne dissemination or high tumor recurrence rates was found in these patients. Use of cell salvage in such cases has been recommended by some. It is possible to compromise by using the cell salvage suction during dissection of tumor-free areas, while employing a separate suction to collect and discard material during actual tumor dissection. Nonetheless, more clinical studies will be necessary to fully resolve this issue.

In abdominal trauma, shed blood is frequently contam-inated by intestinal contents. Because of red cell binding, bacteria survive processing by cell salvage equipment and can be transfused back to the patient. Whether transfusion of such contaminated blood contributes to the morbidity is questionable. Many experts feel that such patients are exposed to a bacterial load by the nature of their injuries. Prophylactic antibiotics significantly reduce the risk of sepsis. Consequently, there is little additional danger from bacteria in salvaged blood, and patients are spared the dangers associated with homologous blood. Some authors feel that salvaged contaminated blood should be used only as a lifesaving measure when no other blood is available. A definitive answer to this question awaits further clinical trials.

Cell salvage should not be used in the presence of topical hemostatic agents, povidone-iodine, polymyxin, bacitracin, or other topical antibiotics used with irrigation solutions. Its use is presently contraindicated if shed blood is contaminated by amniotic fluid.

Present cell salvage technology requires specially trained personnel to operate the equipment. These individuals should be free from other activities during processing. Consequently, someone other than the anesthesiologist caring for the patient should receive this responsibility.