How is AIHD accomplished?

AIHD is accomplished early in the perioperative period, usually just after the induction of anesthesia.

How is AIHD accomplished?

AIHD is accomplished early in the perioperative period, usually just after the induction of anesthesia. Blood is removed from the patient via a large-bore intravenous catheter and stored in standard blood bags containing anti-coagulant. An arterial catheter may be used for collecting autologous blood, but we have found this to be less satis-factory. Simultaneously, crystalloid, in a 3:1 ratio, or colloid (albumin, hydroxymethyl starch, or dextran) in a 1:1 ratio is infused through another large-bore intravenous catheter. The amount of blood to be removed can be calculated by any of the formulas used to calculate allowable blood loss. We typically use the following formula:

Typically, a target Hct in the mid to upper 20s (25–27%) is used; this allows for substantial hemodilution yet allows some margin of safety when blood loss begins to occur during surgery. In this instance, HctA = 40%, EBV = 70 kg

Thus, 3–4 units of the patient’s blood could be removed for later retransfusion.

As units of blood are removed, they are labeled and numbered consecutively. Blood is retrans-fused in reverse order of collection. The first unit removed is the least dilute and the richest in red cells, plasma factors, and platelets; therefore, it should be the last unit retransfused. 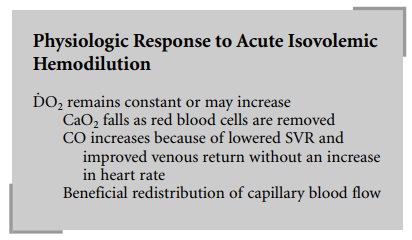 Blood removed during hemodilution may be stored in the operating room at room temperature for a maximum of 6 hours. Autologous blood remaining after surgery may be stored in a blood bank refrigerator for further use. 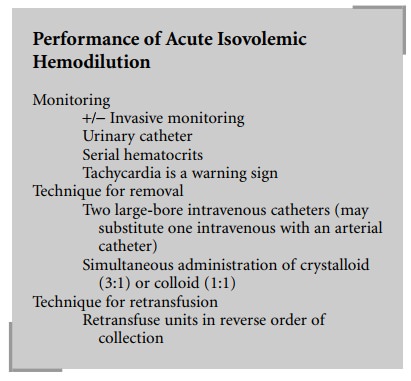 Invasive hemodynamic monitoring (arterial catheter, central venous catheter) is not mandatory during isovolemic hemodilution, but it facilitates serial Hct measurements and provides a guide to fluid replacement. Because CO rises in AIHD without an increase in heart rate, development of intraoperative tachycardia may indicate hypovolemia and the need for retransfusion. A urinary catheter to monitor urine output as a gauge of intravascular volume may be helpful. Also, replacing autologous blood with 3 times the volume of crystalloid initiates a diuresis.