Home | | Clinical Cases in Anesthesia | Explain the advantages and disadvantages of different autologous blood sources
Posted On :  06.09.2017 03:41 am

Explain the advantages and disadvantages of different autologous blood sources

Much controversy, and little consensus, exists in the lit-erature about the “best” way to utilize autologous blood, with some experts advocating one method and others another.

Explain the advantages and disadvantages of different autologous blood sources.

Much controversy, and little consensus, exists in the lit-erature about the “best” way to utilize autologous blood, with some experts advocating one method and others another. If it is not clear which method is superior, it is clear that each has something to offer, with the relative strengths and weaknesses of each method dependent on the clinical circumstances (Table 51.4). 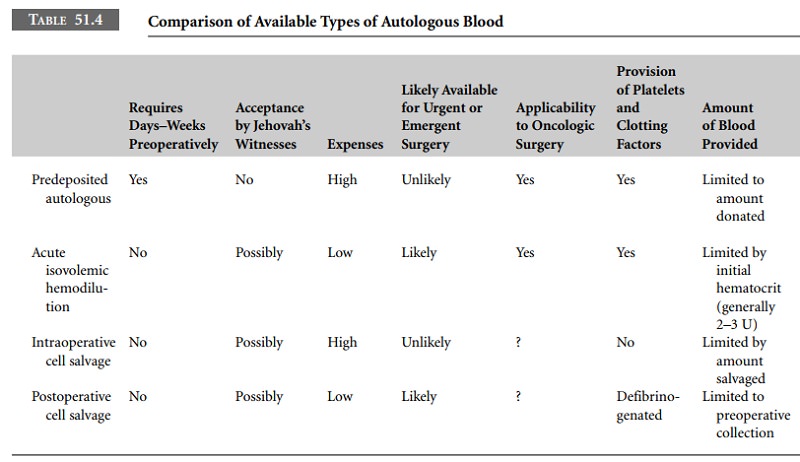 PABD has the disadvantages of being relatively expen-sive, subjecting patients to some of the same risks as homologous transfusion (administrative error, storage lesion), and requiring a substantial time interval between harvesting the blood and the date of surgery. If blood is donated too close to the date of surgery, with insufficient time for the resynthesis of red cells to compensate for the amount removed, patients can be relatively anemic at the time of surgery and tend to leave the hospital with a lower Hct compared with controls. However, if blood is collected at a suitable interval before surgery, so that substantive erythropoiesis can occur, PABD can be a highly effective method of preventing exposure to homologous blood. A survey of 1,000 hospitals recently found that PABD is the most commonly practiced method of blood conservation. Its use is widely accepted by patients, and in some states in the United States (California), discussion of PABD is mandatory as part of informed consent for any operation in which blood transfusion is likely.

AIHD has the advantage of being inexpensive, and is a “point-of-care” intervention. It obviates the need for weeks-in-advance planning and eliminates the risk of administra-tive error associated with stored blood. A number of clinical studies purport to show that it is of comparable efficiency, with less cost, to PABD or cell salvage. However, other stud-ies, as well as mathematical models, have shown that the amount of red blood cells saved by AIHD is quite small and usually clinically insignificant. For AIHD to be clinically useful, both low Hct and large surgical blood losses must be safely tolerated. A number of authors have raised concerns about the iatrogenic introduction of risk in patients with previously unappreciated cardiac disease from moderate or profound hemodilution. Because of such concerns, the use of AIHD is probably of limited benefit to older patients. Its use is probably least contro-versial, and of greatest benefit, in pediatric or young adult patients with a low likelihood of unappreciated cardiac disease, who are not anemic, and who are having surgeries with large anticipated blood loss.

Intraoperative cell salvage is a widely used and highly effective method of reducing patients’ exposure to homol-ogous blood, and in cases involving large amounts of bleeding this procedure can rapidly provide autologous blood for return. Its use has been criticized largely on the grounds of cost-effectiveness, with the “break-even” point being 2 units of blood. However, by initially setting up only the collection (suction) part of the apparatus, and setting up the remainder, and more costly portion, of the machine only if a sufficient amount of blood has been collected, unnecessary costs associated with cell salvage can be decreased. Though there has been theoretical concern about the use of cell salvage in cases involving possible contamination of the blood with malignant cells or bacteria, clinical studies and experience have not shown an increase in either metastatic tumor spread or infection rates. Intraoperative cell salvage is an essential part of blood conservation programs. 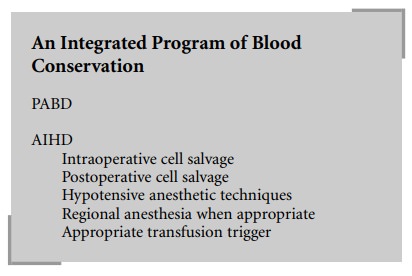 Scientific advances over the past decade have greatly decreased the likelihood of transmission of viral diseases such as HIV and hepatitis C via blood transfusion. Nonetheless, avoidance of blood transfusion remains a significant concern on the part of the public, and has been identified as one of the most important factors in a patient’s decision as to where to seek medical care. Furthermore, the potential impact of emerging diseases as West Nile virus, severe acute respiratory syndrome (SARS), and spongiform encephalopathies on the safety of the blood supply is of concern to both the public and the medical community. Spurred by such factors, the popularity of so-called bloodless surgery programs, designed to reduce or minimize exposure to homologous blood, has increased, and such programs are offered by approximately 100 centers in the United States.

A comprehensive program to decrease homologous blood exposure utilizes all of the techniques discussed in this chapter. Additional factors in attempting to decrease blood loss include careful surgical techniques, maintenance of normothermia, use of regional anesthesia, and in select patients, use of hypotensive general anesthesia. When combined with the use of an appropriate transfusion trig-ger, these techniques all contribute to minimizing patient exposure to homologous blood.