What Does "Secure" Mean?

How do we protect our most valuable assets? One option is to place them in a safe place, like a bank. We seldom hear of a bank robbery these days, even though it was once a fairly lucrative undertaking.

Is There a Security Problem in Computing?

What Does "Secure" Mean?

How do we protect our most valuable assets? One option is to place them in a safe place, like a bank. We seldom hear of a bank robbery these days, even though it was once a fairly lucrative undertaking. In the American Wild West, banks kept large amounts of cash on hand, as well as gold and silver, which could not be traced easily. In those days, cash was much more commonly used than checks. Communications and transportation were primitive enough that it might have been hours before the legal authorities were informed of a robbery and days before they could actually arrive at the scene of the crime, by which time the robbers were long gone. To control the situation, a single guard for the night was only marginally effective. Should you have wanted to commit a robbery, you might have needed only a little common sense and perhaps several days to analyze the situation; you certainly did not require much sophisticated training. Indeed, you usually learned on the job, assisting other robbers in a form of apprenticeship. On balance, all these factors tipped very much in the favor of the criminal, so bank robbery was, for a time, considered to be a profitable business. Protecting assets was difficult and not always effective.

Today, however, asset protection is easier, with many factors working against the potential criminal. Very sophisticated alarm and camera systems silently protect secure places like banks whether people are around or not. The techniques of criminal investigation have become so effective that a person can be identified by genetic material (DNA), fingerprints, retinal patterns, voice, a composite sketch, ballistics evidence, or other hard-to-mask characteristics. The assets are stored in a safer form. For instance, many bank branches now contain less cash than some large retail stores because much of a bank's business is conducted with checks, electronic transfers, credit cards, or debit cards. Sites that must store large amounts of cash or currency are protected with many levels of security: several layers of physical systems, complex locks, multiple-party systems requiring the agreement of several people to allow access, and other schemes. Significant improvements in transportation and communication mean that police can be at the scene of a crime in minutes; dispatchers can alert other officers in seconds about the suspects to watch for. From the criminal's point of view, the risk and required sophistication are so high that there are usually easier ways than bank robbery to make money.

This book is about protecting our computer -related assets, not about protecting our money and gold bullion. That is, we plan to discuss security for computing systems, not banks. But we can learn from our analysis of banks because they tell us some general principles about protection. In other words, when we think about protecting valuable information, we can learn a lot from the way we have protected other valuables in the past. For example, Table 1-1 presents the differences between how people protect computing systems and how banks protect money. The table reinforces the point that we have many challenges to address when protecting computers and data, but the nature of the challenges may mean that we need different and more effective approaches than we have used in the past. 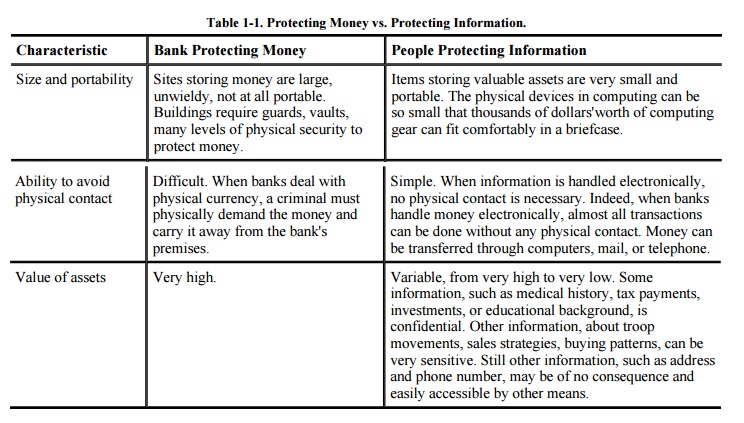 Protecting our valuables, whether they are expressed as information or in some other way, ranges from quite unsophisticated to very sophisticated. We can think of the Wild West days as an example of the "unsophisticated" end of the security spectrum. And even today, when we have more sophisticated means of protection than ever before, we still see a wide range in how people and businesses actually use the protections available to them.

In fact, we can find far too many examples of computer security that seem to be back in the Wild West days. Although some organizations recognize computers and their data as valuable and vulnerable resources and have applied appropriate protection, others are dangerously deficient in their security measures. In some cases, the situation is even worse than that in the Wild West; as Sidebar 1-1 illustrates, some enterprises do not even recognize that their resources should be controlled and protected. And as software consumers, we find that the lack of protection is all the more dangerous when we are not even aware that we are susceptible to software piracy or corruption.

The possibility of crime is bad enough. But worse yet, in the event of a crime, some organizations neither investigate nor prosecute for fear that the revelation will damage their public image. For example, would you feel safe depositing your money in a bank that had just suffered a several million-dollar loss through computer-related embezzlement? In fact, the breach of security makes that bank painfully aware of all its security weaknesses. Once bitten, twice shy; after the loss, the bank will probably enhance its security substantially, quickly becoming safer than a bank that had not been recently victimized.

Even when organizations want to take action against criminal activity, criminal investigation and prosecution can be hindered by statutes that do not recognize electromagnetic signals as property. The news media sometimes portrays computer intrusion by teenagers as a prank no more serious than tipping over an outhouse. But, as we see in later chapters, computer intrusion can hurt businesses and even take lives. The legal systems around the world are rapidly coming to grips with the nature of electronic property as intellectual property critical to organizational or mission success; laws are being implemented and court decisions declared that acknowledge the value of information stored or transmitted via computers. But this area is still new to many courts, and few precedents have been established.

Throughout this book, we look at examples of how computer security affects our livesdirectly and indirectly. And we examine techniques to prevent security breaches or at least to mitigate their effects. We address the security concerns of software practitioners as well as those professionals, managers, and users whose products, services, and well-being depend on the proper functioning of computer systems. By studying this book, you can develop an understanding of the basic problems underlying computer security and the methods available to deal with them.

In particular, we do the following:

examine the risks of security in computing

In this chapter, we begin by examining what kinds of vulnerabilities computing systems are prone to. We then consider why these vulnerabilities are exploited: the different kinds of attacks that are possible. This chapter's third focus is on who is involved: the kinds of people who contribute to the security problem. Finally, we introduce how to prevent possible attacks on systems.

Any part of a computing system can be the target of a crime. When we refer to a computing system, we mean a collection of hardware, software, storage media, data, and people that an organization uses to perform computing tasks. Sometimes, we assume that parts of a computing system are not valuable to an outsider, but often we are mistaken. For instance, we tend to think that the most valuable property in a bank is the cash, gold, or silver in the vault. But in fact the customer information in the bank's computer may be far more valuable. Stored on paper, recorded on a storage medium, resident in memory, or transmitted over telephone lines or satellite links, this information can be used in myriad ways to make money illicitly. A competing bank can use this information to steal clients or even to disrupt service and discredit the bank. An unscrupulous individual could move money from one account to another without the owner's permission. A group of con artists could contact large depositors and convince them to invest in fraudulent schemes. The variety of targets and attacks makes computer security very difficult.

Any system is most vulnerable at its weakest point. A robber intent on stealing something from your house will not attempt to penetrate a two-inch-thick metal door if a window gives easier access. Similarly, a sophisticated perimeter physical security system does not compensate for unguarded access by means of a simple telephone line and a modem. We can codify this idea as one of the principles of computer security.

Principle of Easiest Penetration: An intruder must be expected to use any available means of penetration. The penetration may not necessarily be by the most obvious means, nor is it necessarily the one against which the most solid defense has been installed. And it certainly does not have to be the way we want the attacker to behave.

This principle implies that computer security specialists must consider all possible means of penetration. Moreover, the penetration analysis must be done repeatedly, and especially whenever the system and its security change. People sometimes underestimate the determination or creativity of attackers. Remember that computer security is a game with rules only for the defending team: The attackers can (and will) use any means they can. Perhaps the hardest thing for people outside the security community to do is to think like the attacker. One group of creative security researchers investigated a wireless security system and reported a vulnerability to the system's chief designer, who replied "that would work, but no attacker would try it" [BON06]. Don't believe that for a minute: No attack is out of bounds.

Strengthening one aspect of a system may simply make another means of penetration more appealing to intruders. For this reason, let us look at the various ways by which a system can be breached.