When you test any computer system, one of your jobs is to imagine how the system could malfunction. Then, you improve the system's design so that the system can withstand any of the problems you have identified. In the same way, we analyze a system from a security perspective, thinking about ways in which the system's security can malfunction and diminish the value of its assets.

A computer-based system has three separate but valuable components: hardware, software, and data. Each of these assets offers value to different members of the community affected by the system. To analyze security, we can brainstorm about the ways in which the system or its information can experience some kind of loss or harm. For example, we can identify data whose format or contents should be protected in some way. We want our security system to make sure that no data are disclosed to unauthorized parties. Neither do we want the data to be modified in illegitimate ways. At the same time, we must ensure that legitimate users have access to the data. In this way, we can identify weaknesses in the system.

A vulnerability is a weakness in the security system, for example, in procedures, design, or implementation, that might be exploited to cause loss or harm. For instance, a particular system may be vulnerable to unauthorized data manipulation because the system does not verify a user's identity before allowing data access.

A threat to a computing system is a set of circumstances that has the potential to cause loss or harm. To see the difference between a threat and a vulnerability, consider the illustration in Figure 1-1. Here, a wall is holding water back. The water to the left of the wall is a threat to the man on the right of the wall: The water could rise, overflowing onto the man, or it could stay beneath the height of the wall, causing the wall to collapse. So the threat of harm is the potential for the man to get wet, get hurt, or be drowned. For now, the wall is intact, so the threat to the man is unrealized. 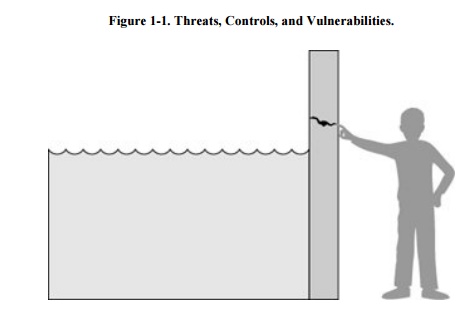 However, we can see a small crack in the walla vulnerability that threatens the man's security. If the water rises to or beyond the level of the crack, it will exploit the vulnerability and harm the man.

There are many threats to a computer system, including human-initiated and computer -initiated ones. We have all experienced the results of inadvertent human errors, hardware design flaws, and software failures. But natural disasters are threats, too; they can bring a system down when the computer room is flooded or the data center collapses from an earthquake, for example.

A human who exploits a vulnerability perpetrates an attack on the system. An attack can also be launched by another system, as when one system sends an overwhelming set of messages to another, virtually shutting down the second system's ability to function. Unfortunately, we have seen this type of attack frequently, as denial-of-service attacks flood servers with more messages than they can handle. (We take a closer look at denial of service in Chapter 7.)

How do we address these problems? We use a control as a protective measure. That is, a control is an action, device, procedure, or technique that removes or reduces a vulnerability. In Figure 1-1, the man is placing his finger in the hole, controlling the threat of water leaks until he finds a more permanent solution to the problem. In general, we can describe the relationship among threats, controls, and vulnerabilities in this way:

A threat is blocked by control of a vulnerability.

Much of the rest of this book is devoted to describing a variety of controls and understanding the degree to which they enhance a system's security.

To devise controls, we must know as much about threats as possible. We can view any threat as being one of four kinds: interception, interruption, modification, and fabrication. Each threat exploits vulnerabilities of the assets in computing systems; the threats are illustrated in Figure 1-2. 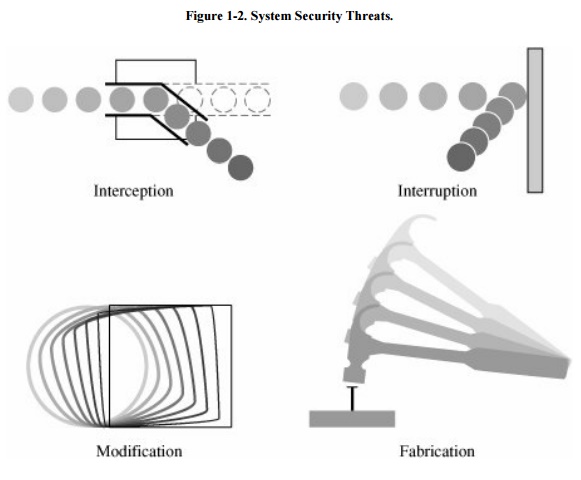 An interception means that some unauthorized party has gained access to an asset. The outside party can be a person, a program, or a computing system. Examples of this type of failure are illicit copying of program or data files, or wiretapping to obtain data in a network. Although a loss may be discovered fairly quickly, a silent interceptor may leave no traces by which the interception can be readily detected.

In an interruption, an asset of the system becomes lost, unavailable, or unusable. An example is malicious destruction of a hardware device, erasure of a program or data file, or malfunction of an operating system file manager so that it cannot find a particular disk file.

If an unauthorized party not only accesses but tampers with an asset, the threat is a modification. For example, someone might change the values in a database, alter a program so that it performs an additional computation, or modify data being transmitted electronically. It is even possible to modify hardware. Some cases of modification can be detected with simple measures, but other, more subtle, changes may be almost impossible to detect.

Finally, an unauthorized party might create a fabrication of counterfeit objects on a computing system. The intruder may insert spurious transactions to a network communication system or add records to an existing database. Sometimes these additions can be detected as forgeries, but if skillfully done, they are virtually indistinguishable from the real thing.

These four classes of threatsinterception, interruption, modification, and fabricationdescribe the kinds of problems we might encounter. In the next section, we look more closely at a system's vulnerabilities and how we can use them to set security goals.

A malicious attacker must have three things:

method: the skills, knowledge, tools, and other things with which to be able to pull off the attack

opportunity: the time and access to accomplish the attack

motive: a reason to want to perform this attack against this system

(Think of the acronym "MOM.") Deny any of those three things and the attack will not occur. However, it is not easy to cut these off.

Knowledge of systems is widely available. Mass-market systems (such as the Microsoft or Apple or Unix operating systems) are readily available, as are common products, such as word processors or database management systems. Sometimes the manufacturers release detailed specifications on how the system was designed or operates, as guides for users and integrators who want to implement other complementary products. But even without documentation, attackers can purchase and experiment with many systems. Often, only time and inclination limit an attacker.

Many systems are readily available. Systems available to the public are, by definition, accessible; often their owners take special care to make them fully available so that if one hardware component fails, the owner has spares instantly ready to be pressed into service.

Finally, it is difficult to determine motive for an attack. Some places are what are called "attractive targets," meaning they are very appealing to attackers. Popular targets include law enforcement and defense department computers, perhaps because they are presumed to be well protected against attack (so that a successful attack shows the attacker's prowess). Other systems are attacked because they are easy. (See Sidebar 1-2 on universities as targets.) And other systems are attacked simply because they are there: random, unassuming victims.

Protecting against attacks can be difficult. Anyone can be a victim of an attack perpetrated by an unhurried, knowledgeable attacker. In the remainder of this book we discuss the nature of attacks and how to protect against them.