While transporters and leak channels shape the resting po-tential, the action potential is the fiefdom of the gated channels.

In the resting state, the voltage-gated channels are closed. As stated before, the negative-inside potential at rest is due to the occurrence of K+ leak channels (Figure 4.5a). The voltage-gated channels enter into the picture when a change occurs in the surrounding electrical field. The channel pro-teins possess mechanically flexible domains that carry an electrical charge, and that will thus change conformation in response to Coulomb forces. If the electrical field is re-versed artificially using microelectrodes, the gate of the sodium channel `swings' open (Figure 4.5b), and all of a sudden the permeability of the cell membrane for sodium will exceed that for potassium. According to the Goldman equation, this will lead to the re-orientation of the mem-brane potential, because the distribution of Na+ ions is op-posite to that of K+. This reversal of the membrane is called depolarization. Therefore, the membrane responds to a lim-ited extrinsic depolarization with a much more vigorous de-polarization of its own. This is what constitutes membrane excitation. 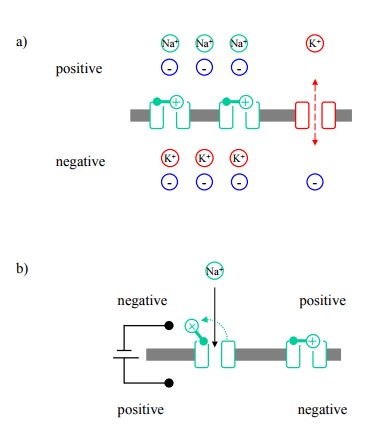 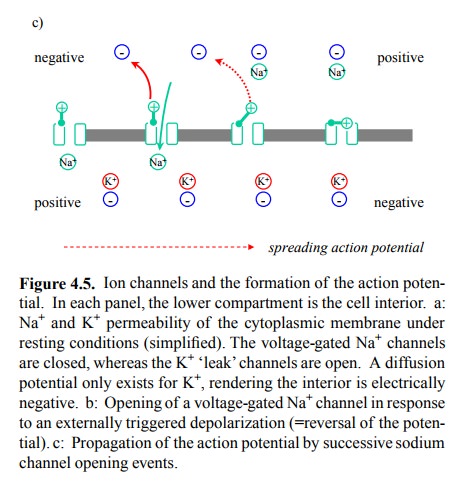 Figure 4.5. Ion channels and the formation of the action poten-tial. In each panel, the lower compartment is the cell interior. a: Na+ and K+ permeability of the cytoplasmic membrane under resting conditions (simplified). The voltage-gated Na + channels are closed, whereas the K+ `leak' channels are open. A diffusion potential only exists for K+, rendering the interior is electrically negative. b: Opening of a voltage-gated Na+ channel in response to an externally triggered depolarization (=reversal of the poten-tial). c: Propagation of the action potential by successive sodium channel opening events.

A crucial aspect of this excitation is that it will spread along the entire expanse of the membrane. The initial, trigger-ing depolarization is usually a localized event; the opening of the sodium channels close by then provides the trigger for channel opening and depolarization in the adjoining re-gions in turn. This self-sustained, spreading depolarization is called the action potential (Figure 4.5c).

Although the simplified cartoons suggest otherwise, the membrane potential does not actually have to be reversed for the sodium channels to open. As soon as the externally triggered depolarization reaches a threshold value of about -55mV (Figure 4.6b), the sodium channels will start to open, and the action potential will be triggered, causing the depolarization to spontaneously go up to about +50-60 mV (Figure 4.6a). 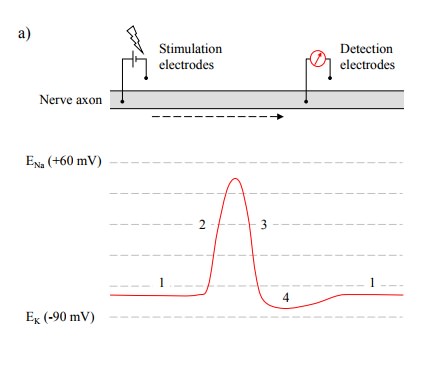 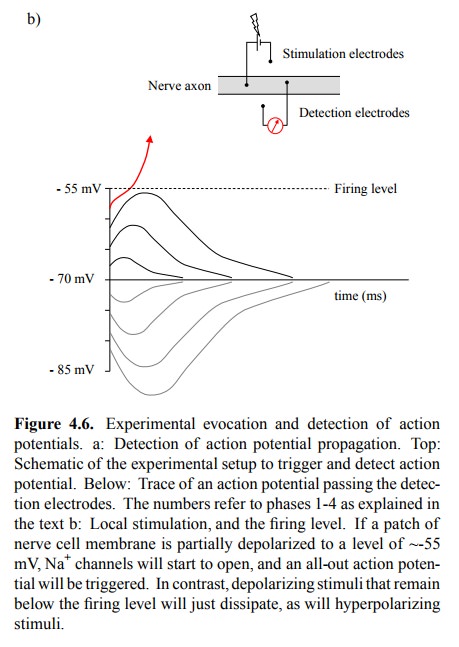 Figure 4.6a shows the trace of an action potential traveling down a nerve fiber, recorded at some distance downstream of the stimulating electrode. It consists of a brief depolarization spike (duration ~1-3 msec) that approaches but does not quite reach the Na+ equilibrium potential, followed by a slightly longer lasting depression below the level of the resting potential. Altogether, we can distinguish four phases in the potential curve (see numbers in Figure 4.6a), which can be explained as follows:

·     Phase 1 is the resting potential, maintained close to the K+ equilibrium potential by the K+ leak channels.

·     The transient hyperpolarization is due to open voltage-gated K+ channels lingering after the Na+ channels have already closed.

Thus, two effects are responsible for the limited duration of the action potential (essential if we don't want to throw away the brain cell after single use, kind of wasteful):

1.  The inactivation of the sodium channels, which after having stayed open for just a few milliseconds will close despite persisting membrane depolarization;

2.  The opening of the voltage-gated potassium channels, which will pull the membrane potential back into the direction of the K+ equilibrium potential.

While the workings of the sodium and the potassium chan-nels are closely similar, the sodium channels are faster at both opening and closing. This gives the action potential its shape (Figure 4.7).

If depolarization is responsible for opening the channel gate, it can not easily be blamed for its closing (cf. Figure 4.5b). To account for the closing event, we must therefore postulate a separate mechanism (Figure 4.8). The struc-ture of the voltage-gated potassium channel is more or less known (Figure 4.9), and the gate mechanisms for both opening and inactivation can actually be located. 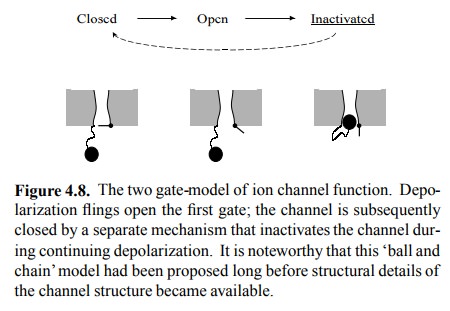 The channel consists of four protein subunits, each of which contributes 6 helices to transmembrane part of the channel. In addition, a sizeable chunk of protein protrudes into the cytosol. The trigger of the opening gate is located on one of the 6 transmembrane helices, which carries sev-eral positive charges (an unusual feature for transmembrane helices, which typically have no charges at all). The charge will cause the helix to move when the electrical field in its vicinity is changed, i.e. when the membrane is depolarized. This movement will cause adjacent helices to move in turn and thus open the gate (Figure 4.9b). 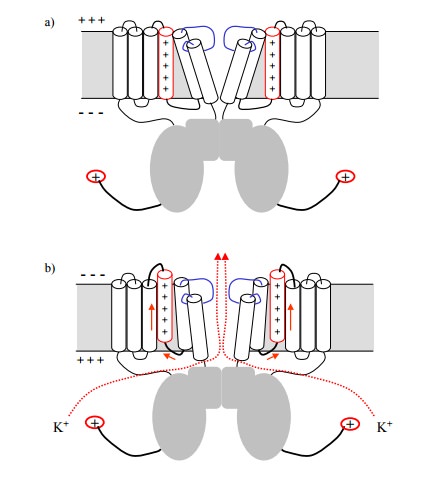 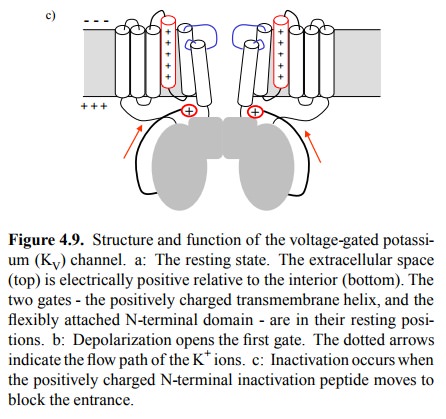 The second gate, which is responsible for inactivation, conforms very much to the ball-and-chain mechanism de scribed in Figure 4.8. It consists in a positively charged, flexibly attached N-terminal domain, which likewise under-goes a movement in the changed electrical field and simply plugs the pathway that is transiently opened for the K+ ions (Figure 4.9c).