Vocalization - Functions of the Respiratory Passageways

Speech involves not only the respiratory system but also (1) specific speech nervous control centers in the cerebral cortex; (2) respiratory control centers of the brain; and (3) the articulation and resonance structures of the mouth and nasal cavities. Speech is composed of two mechanical functions: (1) phonation, which is achieved by the larynx, and (2) articulation, which is achieved by the structures of the mouth.

Figure 37–9B shows the vocal cords as they are seen when looking into the glottis with a laryngoscope. During normal breathing, the cords are wide open to allow easy passage of air. During phonation, the cords move together so that passage of air between them will cause vibration. The pitch of the vibration is determined mainly by the degree of stretch of the cords, but also by how tightly the cords are approximated to one another and by the mass of their edges. 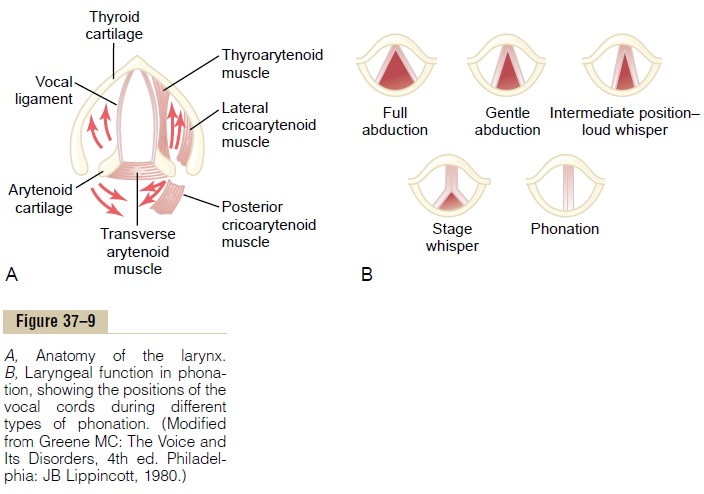 Finally, several other sets of small laryngeal muscles lie between the arytenoid cartilages and the cricoid car-tilage and can rotate these cartilages inward or outward or pull their bases together or apart to give the various configurations of the vocal cords shown in Figure 37–9B.

Articulation and Resonance. The three major organs ofarticulation are the lips, tongue, and soft palate. They need not be discussed in detail because we are all famil-iar with their movements during speech and other vocalizations.

The resonators include the mouth, the nose and asso-ciated nasal sinuses, the pharynx, and even the chest cavity. Again, we are all familiar with the resonatingqualities of these structures. For instance, the function of the nasal resonators is demonstrated by the change in voice quality when a person has a severe cold that blocks the air passages to these resonators.