The lung is an elastic structure that collapses like a balloon and expels all its air through the trachea when-ever there is no force to keep it inflated.

The lung is an elastic structure that collapses like a balloon and expels all its air through the trachea when-ever there is no force to keep it inflated. Also, there are no attachments between the lung and the walls of the chest cage, except where it is suspended at its hilum from the mediastinum. Instead, the lung “floats” in the thoracic cavity, surrounded by a thin layer of pleuralfluid that lubricates movement of the lungs within thecavity. Further, continual suction of excess fluid into lymphatic channels maintains a slight suction between the visceral surface of the lung pleura and the parietal pleural surface of the thoracic cavity. Therefore, the lungs are held to the thoracic wall as if glued there, except that they are well lubricated and can slide freely as the chest expands and contracts. 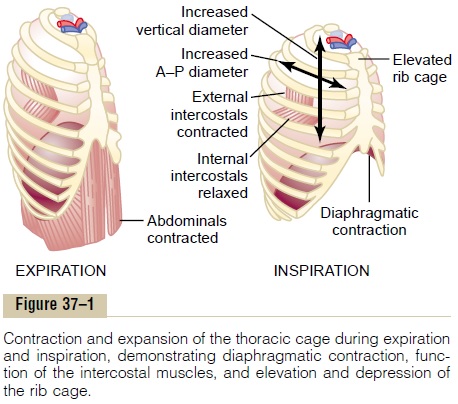 Pleural Pressure and Its Changes During Respiration

Pleural pressure is the pressure of the fluid in the thinspace between the lung pleura and the chest wall pleura. As noted earlier, this is normally a slight suction, which means a slightly negative pressure. The normal pleural pressure at the beginning of inspiration 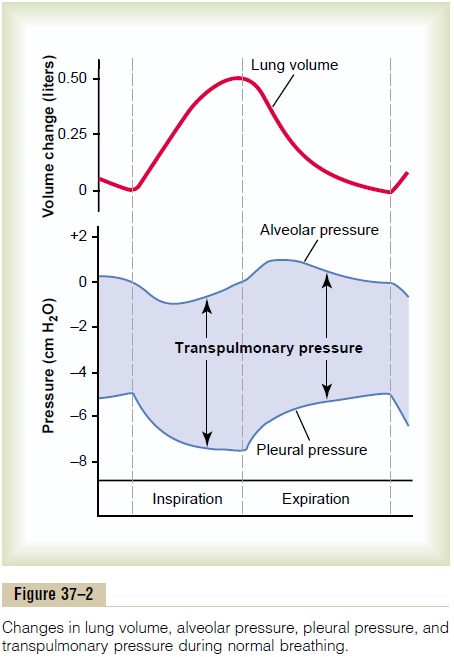 is about –5 centimeters of water, which is the amount of suction required to hold the lungs open to their resting level. Then, during normal inspiration, expan-sion of the chest cage pulls outward on the lungs with greater force and creates more negative pressure, to an average of about –7.5 centimeters of water.

These relationships between pleural pressure and changing lung volume are demonstrated in Figure 37–2, showing in the lower panel the increasing nega-tivity of the pleural pressure from –5 to –7.5 during inspiration and in the upper panel an increase in lung volume of 0.5 liter. Then, during expiration, the events are essentially reversed.

Alveolar pressure is the pressure of the air inside thelung alveoli. When the glottis is open and no air is flowing into or out of the lungs, the pressures in all parts of the respiratory tree, all the way to the alveoli, are equal to atmospheric pressure, which is considered to be zero reference pressure in the airways—that is, 0 centimeters water pressure. To cause inward flow of air into the alveoli during inspiration, the pressure in the alveoli must fall to a value slightly below atmos-pheric pressure (below 0). The second curve (labeled “alveolar pressure”) of Figure 37–2 demonstrates that during normal inspiration, alveolar pressure decreases to about –1 centimeter of water. This slight negative pressure is enough to pull 0.5 liter of air into the lungs in the 2 seconds required for normal quiet inspiration.

During expiration, opposite pressures occur: The alveolar pressure rises to about +1 centimeter of water, and this forces the 0.5 liter of inspired air out of the lungs during the 2 to 3 seconds of expiration.

Transpulmonary Pressure. Finally, note in Figure 37–2 thedifference between the alveolar pressure and the pleural pressure. This is called the transpulmonarypressure. It is the pressure difference between that inthe alveoli and that on the outer surfaces of the lungs, and it is a measure of the elastic forces in the lungs that tend to collapse the lungs at each instant of res-piration, called the recoil pressure.

Compliance Diagram of the Lungs. Figure 37–3 is a diagramrelating lung volume changes to changes in transpul-monary pressure. Note that the relation is different for inspiration and expiration. Each curve is recorded by changing the transpulmonary pressure in small steps and allowing the lung volume to come to a steady level between successive steps. The two curves are called, respectively, the inspiratory compliance curve and the expiratory compliance curve, and the entire diagram iscalled the compliance diagram of the lungs. 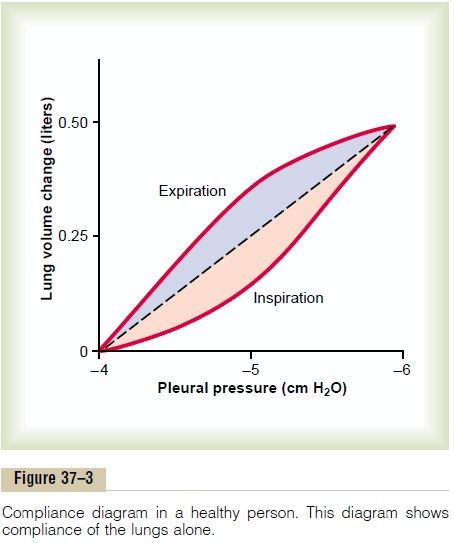 The elastic forces of the lung tissue are determined mainly by elastin and collagen fibers interwoven among the lung parenchyma. In deflated lungs, these fibers are in an elastically contracted and kinked state; then, when the lungs expand, the fibers become stretched and unkinked, thereby elongating and exert-ing even more elastic force. 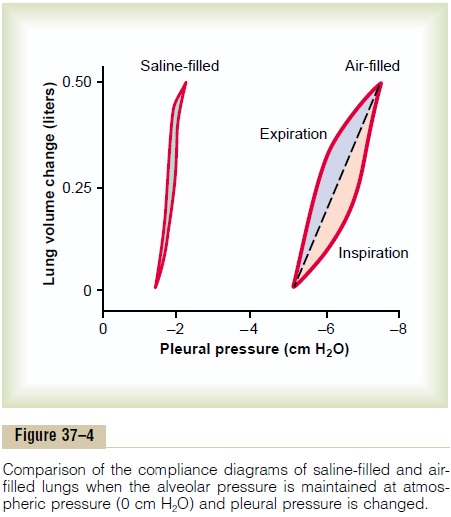 The fluid-air surface tension elastic forces of the lungs also increase tremendously when the substance called surfactant is not present in the alveolar fluid. Let us now discuss surfactant and its relation to the surface tension forces.

Surfactant, Surface Tension, and Collapse of the Alveoli Principle of Surface Tension. When water forms a surfacewith air, the water molecules on the surface of the water have an especially strong attraction for one another. As a result, the water surface is always attempting to contract. This is what holds raindrops together: that is, there is a tight contractile membrane of water molecules around the entire surface of the raindrop. Now let us reverse these principles and see what happens on the inner surfaces of the alveoli. Here, the water surface is also attempting to contract. This results in an attempt to force the air out of the alveoli through the bronchi and, in doing so, causes the alveoli to try to collapse. The net effect is to cause an elastic contractile force of the entire lungs, which is called thesurface tension elastic force.

Surfactant and Its Effect on Surface Tension. Surfactant is asurface active agent in water, which means that itgreatly reduces the surface tension of water. It is secreted by special surfactant-secreting epithelial cells called type II alveolar epithelial cells, which constitute about 10 per cent of the surface area of the alveoli. These cells are granular, containing lipid inclusions that are secreted in the surfactant into the alveoli.

Surfactant is a complex mixture of several phospholipids, proteins, and ions. The most important components are the phospholipiddipalmitoylphos-phatidylcholine, surfactant apoproteins, and calcium ions. The dipalmitoylphosphatidylcholine, along withseveral less important phospholipids, is responsible for reducing the surface tension. It does this by not dissolving uniformly in the fluid lining the alveolar surface. Instead, part of the molecule dissolves, while the remainder spreads over the surface of the water in the alveoli. This surface has from one twelfth to one half the surface tension of a pure water surface.

Pressure in Occluded Alveoli Caused by Surface Tension. If theair passages leading from the alveoli of the lungs are blocked, the surface tension in the alveoli tends to col-lapse the alveoli. This creates positive pressure in the alveoli, attempting to push the air out. The amount of pressure generated in this way in an alveolus can be cal-culated from the following formula:

For the average-sized alveolus with a radius of about 100 micrometers and lined with normal surfactant, this calculates to be about 4 centimeters of water pressure (3 mm Hg). If the alveoli were lined with pure water without any surfactant, the pressure would calculate to be about 18 centimeters of water pressure, 4.5 times as great. Thus, one sees how important surfactant is in reducing alveolar surface tension and therefore also reducing the effort required by the respiratory muscles to expand the lungs.

Effect of Alveolar Radius on the Pressure Caused by Surface Tension. Note from the preceding formula that the pres-sure generated as a result of surface tension in the alveoli is inversely affected by the radius of the alveo-lus, which means that the smaller the alveolus, the greater the alveolar pressure caused by the surface tension. Thus, when the alveoli have half the normal radius (50 instead of 100 micrometers), the pressures noted earlier are doubled. This is especially significant in small premature babies, many of whom have alveoli with radii less than one quarter that of an adult person. Further, surfactant does not normally begin to be secreted into the alveoli until between the sixth and seventh months of gestation, and in some cases, even later than that. Therefore, many premature babies have little or no surfactant in the alveoli when they are born, and their lungs have an extreme tendency to collapse, sometimes as great as six to eight times that in a normal adult person. This causes the condition called respira-tory distress syndrome of the newborn. It is fatal ifnot treated with strong measures, especially properly applied continuous positive pressure breathing.

Study Material, Lecturing Notes, Assignment, Reference, Wiki description explanation, brief detail
Medical Physiology: Pulmonary Ventilation : Movement of Air In and Out of the Lungs and the Pressures That Cause the Movement |