The ultimate importance of pulmonary ventilation is to continually renew the air in the gas exchange areas of the lungs, where air is in proximity to the pulmonary blood.

The ultimate importance of pulmonary ventilation is to continually renew the air in the gas exchange areas of the lungs, where air is in proximity to the pulmonary blood. These areas include the alveoli, alveolar sacs, alveolar ducts, and respiratory bronchioles. The rate at which new air reaches these areas is called alveolarventilation.

“Dead Space” and Its Effect on Alveolar Ventilation

Some of the air a person breathes never reaches the gas exchange areas but simply fills respiratory pas-sages where gas exchange does not occur, such as the nose, pharynx, and trachea. This air is called dead spaceair because it is not useful for gas exchange.

Measurement of the Dead Space Volume. A simple methodfor measuring dead space volume is demonstrated by the graph in Figure 37–7. In making this measurement, the subject suddenly takes a deep breath of oxygen. This 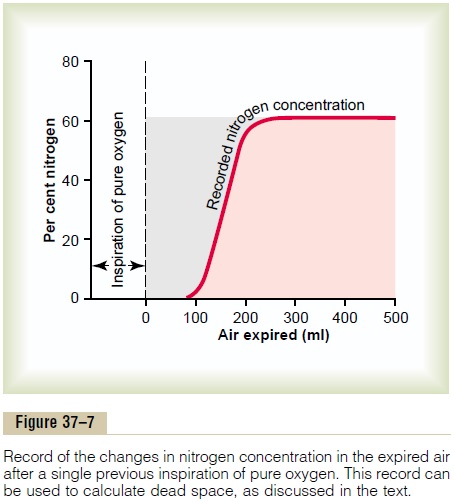 fills the entire dead space with pure oxygen. Some oxygen also mixes with the alveolar air but does not completely replace this air. Then the person expires through a rapidly recording nitrogen meter, which makes the record shown in the figure. The first portion of the expired air comes from the dead space regions of the respiratory passageways, where the air has been completely replaced by oxygen. Therefore, in the early part of the record, only oxygen appears, and the nitro-gen concentration is zero. Then, when alveolar air begins to reach the nitrogen meter, the nitrogen con-centration rises rapidly, because alveolar air containing large amounts of nitrogen begins to mix with the dead space air. After still more air has been expired, all the dead space air has been washed from the passages, and only alveolar air remains. Therefore, the recorded nitro-gen concentration reaches a plateau level equal to its concentration in the alveoli, as shown to the right in the figure. With a little thought, the student can see that the gray area represents the air that has no nitrogen in it; this area is a measure of the volume of dead space air. For exact quantification, the following equation is used:

where VD is dead space air and VE is the total volume of expired air.

Anatomic Versus Physiologic Dead Space. The method justdescribed for measuring the dead space measures the volume of all the space of the respiratory system other than the alveoli and their other closely related gas exchange areas; this space is called theanatomic deadspace. On occasion, some of the alveoli themselves arenonfunctional or only partially functional because of absent or poor blood flow through the adjacent pul-monary capillaries. Therefore, from a functional point of view, these alveoli must also be considered dead space. When the alveolar dead space is included in the total measurement of dead space, this is called the physio-logic dead space, in contradistinction to the anatomicdead space. In a normal person, the anatomic and phys-iologic dead spaces are nearly equal because all alveoli are functional in the normal lung, but in a person with partially functional or nonfunctional alveoli in some parts of the lungs, the physiologic dead space may be as much as 10 times the volume of the anatomic dead space, or 1 to 2 liters.

Alveolar ventilation per minute is the total volume of new air entering the alveoli and adjacent gas exchange areas each minute. It is equal to the respiratory rate times the amount of new air that enters these areas with each breath.

Alveolar ventilation is one of the major factors determining the concentrations of oxygen and carbon dioxide in the alveoli.