Normal Respiratory Functions of the Nose

As air passes through the nose, three distinct normal respiratory functions are performed by the nasal cavi-ties:

Normal Respiratory Functions of the Nose

As air passes through the nose, three distinct normal respiratory functions are performed by the nasal cavi-ties: (1) the air is warmedby the extensive surfaces of the conchae and septum, a total area of about 160 square centimeters (see Figure 37–8); (2) the air isalmost completely humidified even before it passesbeyond the nose; and (3) the air is partially filtered. These functions together are called the air conditioningfunction of the upper respiratory passageways. Ordi-narily, the temperature of the inspired air rises to within 1°F of body temperature and to within 2 to 3 per cent of full saturation with water vapor before it reaches the trachea. When a person breathes air through a tube directly into the trachea (as through a tracheostomy), the cooling and especially the drying effect in the lower lung can lead to serious lung crusting and infection. 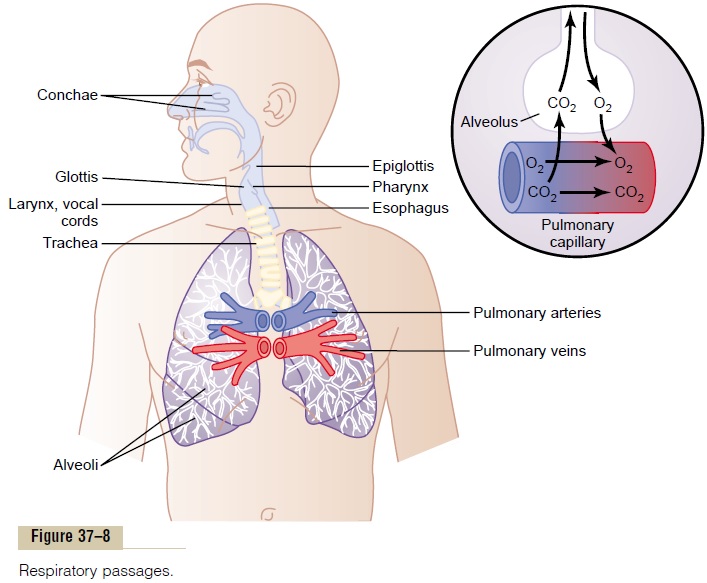 Filtration Function of the Nose. The hairs at the entrance tothe nostrils are important for filtering out large par-ticles. Much more important, though, is the removal of particles by turbulent precipitation. That is, the air passing through the nasal passageways hits many obstructing vanes: the conchae (also called turbinates, because they cause turbulence of the air), the septum, and the pharyngeal wall. Each time air hits one of these obstructions, it must change its direction of movement. The particles suspended in the air, having far more mass and momentum than air, cannot change their direction of travel as rapidly as the air can. Therefore, they con-tinue forward, striking the surfaces of the obstructions, and are entrapped in the mucous coating and trans-ported by the cilia to the pharynx to be swallowed.

Size of Particles Entrapped in the Respiratory Passages. The nasal turbulence mechanism for removing particles from air is so effective that almost no particles larger than 6 micrometers in diameter enter the lungs through the nose. This size is smaller than the size of red blood cells.

Of the remaining particles, many that are between 1 and 5 micrometers settle in the smaller bronchioles as a result of gravitational precipitation. For instance, termi-nal bronchiolar disease is common in coal miners because of settled dust particles. Some of the still smaller particles (smaller than 1 micrometer in diame-ter) diffuse against the walls of the alveoli and adhere to the alveolar fluid. But many particles smaller than 0.5 micrometer in diameter remain suspended in the alve-olar air and are expelled by expiration.

For instance, the particles of cigarette smoke are about 0.3 micrometer. Almost none of these particles are precipitated in the respiratory passageways before they reach the alveoli. Unfortunately, up to one third of them do precipitate in the alveoli by the diffusion process, with the balance remaining suspended and expelled in the expired air.

Many of the particles that become entrapped in the alveoli are removed by alveolar macrophages,, and others are carried away by the lung lymphatics. An excess of particles can cause growth of fibrous tissue in the alveolar septa, leading to permanent debility.