A simple method for studying pulmonary ventilation is to record the volume movement of air into and out of the lungs, a process called spirometry.

A simple method for studying pulmonary ventilation is to record the volume movement of air into and out of the lungs, a process called spirometry. A typical basic spirometer is shown in Figure 37–5. It consists of a drum inverted over a chamber of water, with the drum counterbalanced by a weight. In the drum is a breathing gas, usually air or oxygen; a tube connects the mouth with the gas chamber. When one breathes into and out of the chamber, the drum rises and falls, and an appropriate recording is made on a moving sheet of paper. 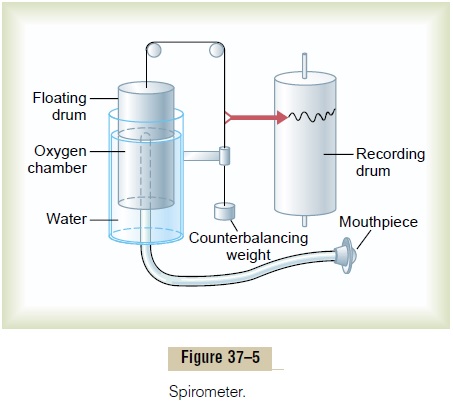 Figure 37–6 shows a spirogram indicating changes in lung volume under different conditions of breathing. For ease in describing the events of pulmonary venti-lation, the air in the lungs has been subdivided in this diagram into four volumes and four capacities, which are the average for a young adult man. 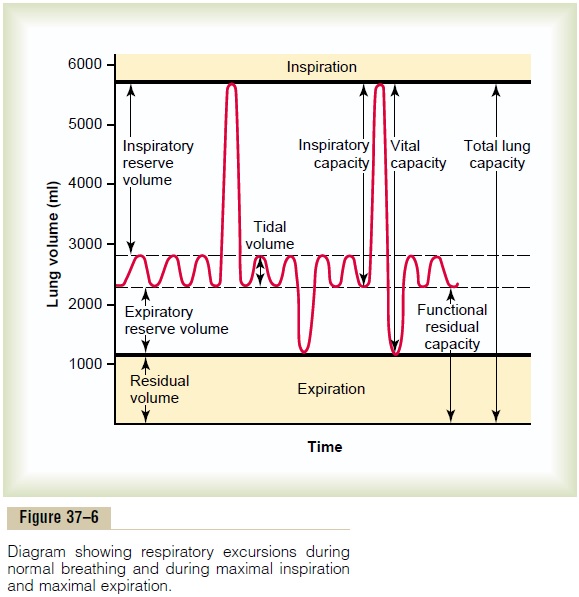 To the left in Figure 37–6 are listed four pulmonary lung volumes that, when added together, equal the maximum volume to which the lungs can be expanded.

The significance of each of these volumes is the following:

1.     The tidal volume is the volume of air inspired or expired with each normal breath; it amounts to about 500 milliliters in the adult male.

2.     The inspiratory reserve volume is the extra volume of air that can be inspired over and above the normal tidal volume when the person inspires with full force; it is usually equal to about 3000 milliliters.

3.  The expiratory reserve volume is the maximum extra volume of air that can be expired by forceful expiration after the end of a normal tidal expiration; this normally amounts to about 1100 milliliters.

4.     The residual volume is the volume of air remaining in the lungs after the most forceful expiration; this volume averages about 1200 milliliters.

In describing events in the pulmonary cycle, it is sometimes desirable to consider two or more of the volumes together. Such combinations are called pul-monary capacities. To the right in Figure 37–6 are listedthe important pulmonary capacities, which can be described as follows:

1.     The inspiratory capacity equals the tidal volume plus the inspiratory reserve volume. This is the amount of air (about 3500 milliliters) a person can breathe in, beginning at the normal expiratory level and distending the lungs to the maximum amount.

2.     The functional residual capacity equals the expiratory reserve volume plus the residual volume. This is the amount of air that remains inthe lungs at the end of normal expiration (about 2300 milliliters).

4.     The total lung capacity is the maximum volume to which the lungs can be expanded with the greatest possible effort (about 5800 milliliters); it is equal to the vital capacity plus the residual volume.

All pulmonary volumes and capacities are about 20 to 25 per cent less in women than in men, and they aregreater in large and athletic people than in small and asthenic people.

Spirometry is only one of many measurement proce-dures that the pulmonary physician uses daily. Many of these measurement procedures depend heavily on mathematical computations. To simplify these calcula-tions as well as the presentation of pulmonary function data, a number of abbreviations and symbols have become standardized. The more important of these are given in Table 37–1. Using these symbols, we present here a few simple algebraic exercises showing some of the interrelations among the pulmonary volumes and capacities; the student should think through and verify these interrelations. 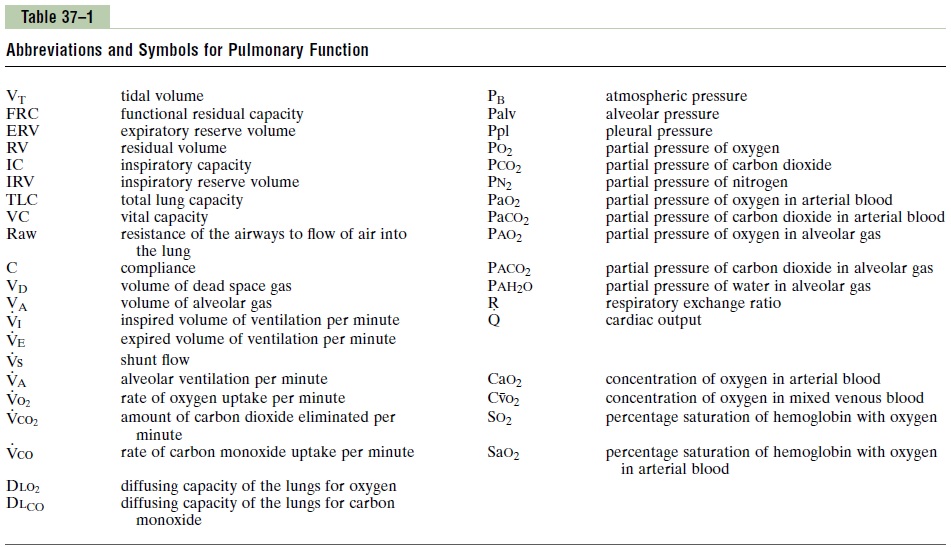