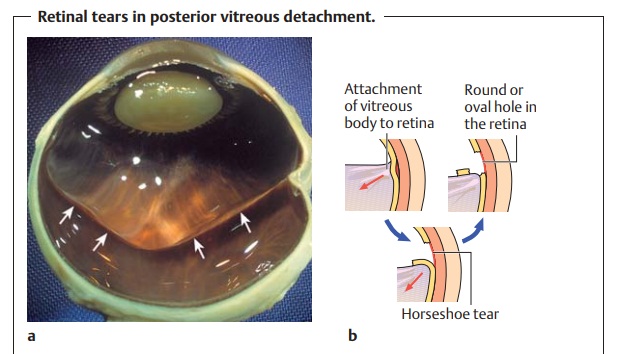 The regular arrangement of collagen fibers gradually deteriorates in middle age. The fibers condense to flattened filamentous structures. This process, known as liquefaction, creates small fluid-filled lacunae in the central vit-reous body that initially are largely asymptomatic (patients may report floaters). However, once liquefaction has progressed beyond a certain point, the vitreous body can collapse and detach from the retina. 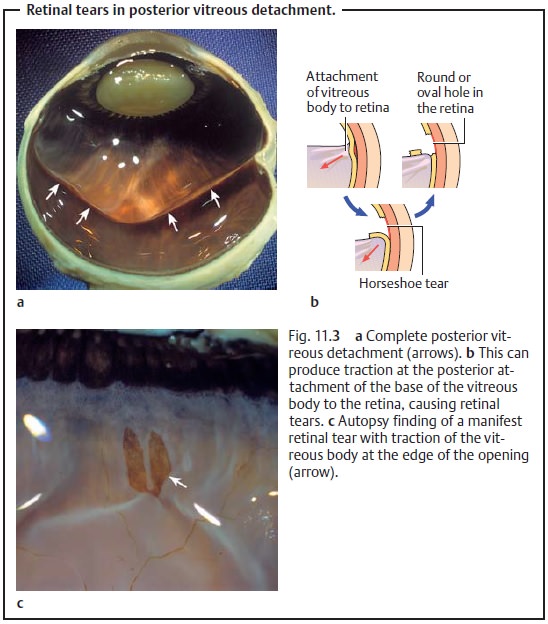 Liquefaction causes collapse of the vitreous body. This usuallybegins posteriorly where the attachments to the underlying tissue are least well developed. Detachment in the anterior region (anterior vitreous detach-ment) or in the region of the vitreous base (basal vitreous detachment) usuallyonly occurs where strong forces act on the globe as in ocular trauma.

Collapse of the vitreous bodyleads to vitreous densi-ties that the patient perceives as mobile opacities. These floaters (also known as flies or cobwebs) may take the form of circular or serpentine lines or points. The vitreous body may detach partially or completely from the retina. An increased risk of retinal detachment is present only with partial vitreousdetachment. In this case, the vitreous body and retina remain attached, withthe result that eye movements in this region will place traction on the retina. The patient perceives this phenomenon as flashes of light. If the traction on the retina becomes too strong, it can tear (see retinal tears in posterior vit-reous detachment, Fig. 11.3b – c). This increases the risk of retinal detachment and vitreous bleeding from injured vessels.

Floaters and especially flashes of light require thorough examination of the ocular fundus to exclude a retinal tear.

The symptoms of vitreous detachment requireexamination of the entire fundus of the eye to exclude a retinal defect. In cases such as lens opacification or vitreous hemorrhage where visualization is not possible, an ultrasound examination is required to evaluate the vitreous body and retina.

Vitreous detachment in the region of the attachment at the optic disk (funnel of Martegiani) will appear as a smokey ring (Weiss’ ring) under ophthalmoscopy.