Abnormal Changes in the Vitreous Body

Abnormal Changes in the Vitreous Body

The embryonic vascular system in the vitreous body and lens normally disap-pears completely, leaving only the hyaloid canal. Persistence of the vascular system is referred to as persistent fetal vasculature. The following section describes the varying degrees of severity of this syndrome as they relate to the vitreous body. Persistence of the anterior tunica vasculosa lentis leads to a persistent pupillary membrane.

Mittendorf’s dot is a small visually asymptomatic opacity in the posterior lens capsule located approximately 0.5 mm medial to the center. This is the site where the hyaloid artery enters the embryonic lens. This harmless change occurs in up to 2% of the total population. Normal lens fiber development can be disturbed where large portions of the hyaloid arterial system remain, although this occurs very rarely. These patients develop posterior polar cata-racts.

With thismore frequentvariant, awhite pupil(leukocoria or amaurotic cat’s eye) typically will be discovered shortly after birth. This is caused by the whitish plate of connective tissue posterior to the lens. Depending on the severity, it will be accompanied by more or less severe changes in the lens leading to more or less severely impaired vision. In extreme cases, the lens resembles an opacified membrane (membranous cat-aract). In rare cases, fatty tissue will develop (lipomatous pseudophakia), andeven more rarely cartilage will develop in the lens. Retrolenticular scarring draws the ciliary processes toward the center, and they will be visible in the pupil. Growth of the eye is retarded. This results in microphthalmos unless drainage of the aqueous humor is also impaired, in which case buphthalmos(hydrophthalmos) will be present.

Retinal detachment andretinal dysplasiacan occurwhere primarily posterior embryonic structures persist. The whitish plate of connective tissue will only be visible where anterior changes associated with persistent hyperplastic primary vitreous are also present. The reduction in visual acuity will vary depending on the severity of the retinal changes.

A definitive diagnosis is usually possible on thebasis of the characteristic clinical picture (see symptoms and findings) and additional ultrasound studies (when the posterior segment is obscured by lens opacities).

Other causes of leukocoria (Table 11.1) should beexcluded. Retinoblastoma, the most important differential diagnosis, can usually be excluded on the basis of ultrasound or CT studies. In the presence of a retinoblastoma, these studies will reveal an intraocular mass with calcifi-cations. In contrast to PHPV, microphthalmos will not be present. 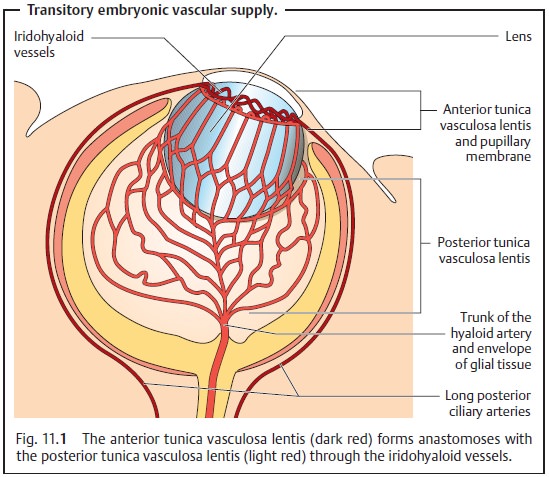 Leukocoria should be regarded as a retinoblastoma until proven other-wise.

The disorder is not usually treated as neither conservative ther-apy nor surgery can improve visual acuity. Surgery is indicated only where complications such as progressive collapse of the anterior chamber, second-ary increase in intraocular pressure, vitreous hemorrhage, and retinal detach-ment are present or imminent. The only goal is to save the eye and maintain existing visual acuity.

The clinical course and prognosis depend pri-marily on the severity of the disorder. However, adequate surgical interven-tion can often save the eye and stabilize visual acuity even if at a very low level.