Vitamin D is a secosteroid produced in the skin from 7-dehydrocholesterol under the influence of ultraviolet radiation.

Vitamin D is a secosteroid produced in the skin from 7-dehydrocholesterol under the influence of ultraviolet radiation. Vitamin D is also found in certain foods and is used to supplement dairy products. Both the natural form (vitamin D3, cholecalciferol) and the plant-derived form (vitamin D2, ergocalciferol) are present in the diet. These forms differ in that ergocalciferol contains a double bond (C22–23) and an additional methyl group in the side chain (Figure 42–3). Ergocalciferol and its metabolites bind less well than cholecalciferol and its metabolites to vitamin D-binding protein, the major transport protein of these compounds in blood, and have a different path of catabolism. As a result their half-lives are shorter than those of the cholecalciferol metabolites. This influ-ences treatment strategies, as will be discussed. However, the key steps in metabolism and biologic activities of the active metabolites are comparable, so with this exception the following comments apply equally well to both forms of vitamin D. 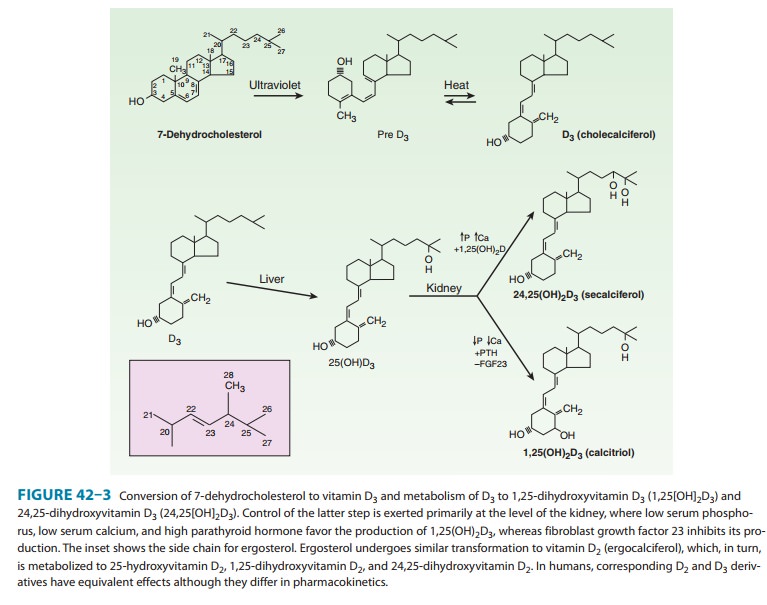 (24,25[OH]2D). The regulation of vitamin D metabolism is complex, involving calcium, phosphate, and a variety of hormones,the most important of which is PTH, which stimulates, and FGF23, which inhibits the production of 1,25(OH)2D by the kidney. Of the natural metabolites, only vitamin D and 1,25(OH)2D (as calcitriol) are available for clinical use (Table 42–1). A number of analogs of 1,25(OH)2D have been synthesized to extend the usefulness of this metabolite to a variety of nonclassic conditions. Calcipotriene (calcipotriol), for example, is being used to treat psoriasis, a hyper-proliferative skin disorder. Doxercalciferol and parical-citol are approved for the treatment of secondary hyperparathyroidism in patients with chronic kidney disease. Other analogs are being investigated for the treatment of various malignancies. 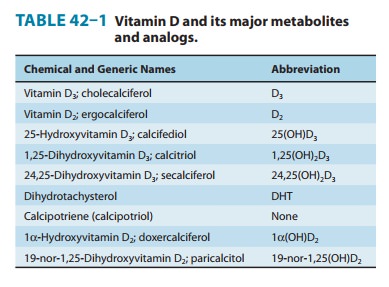 In normal subjects, the terminal half-life of injected calcifediol is 23 days, whereas in anephric subjects it is 42 days. The half-life of 24,25(OH)2D is probably similar. Tracer studies with vitamin D have shown a rapid clearance from the blood. The liver appears to be the principal organ for clearance. Excess vitamin D is stored in adipose tissue. The metabolic clearance of calcitriol in humans indicates a rapid turnover, with a terminal half-life measured in hours. Several of the 1,25(OH)2D analogs are bound poorly by the vitamin D-binding protein. As a result, their clearance is very rapid, with a terminal half-life of minutes. Such analogs have less of the hypercalcemic, hypercalciuric effects of calcitriol, an important aspect of their use for the management of conditions such as psoriasis and hyperparathyroidism.

The mechanism of action of the vitamin D metabolites remains under active investigation. However, 1,25(OH)2D is well estab-lished as the most potent agent with respect to stimulation of intes-tinal calcium and phosphate transport and bone resorption. 1,25(OH)2D appears to act on the intestine both by induction of new protein synthesis (eg, calcium-binding protein and TRPV6, an intestinal calcium channel) and by modulation of calcium flux across the brush border and basolateral membranes by a means that does not require new protein synthesis. The molecular action of 1,25(OH)2D on bone has received less attention. However, like PTH, 1,25(OH)2D can induce RANKL in osteoblasts and proteins such as osteocalcin, which may regulate the mineralization process. The metabolites 25(OH)D and 24,25(OH)2D are far less potent stimulators of intestinal calcium and phosphate transport or bone resorption. However, 25(OH)D appears to be more potent than 1,25(OH)2D in stimulating renal reabsorption of calcium and phosphate and may be the major metabolite regulating calcium flux and contractility in muscle. Specific receptors for 1,25(OH)2D exist in target tissues. However, the role and even the existence of separate receptors for 25(OH)D and 24,25(OH)2D remain controversial.

The receptor for 1,25(OH)2D exists in many tissues—not just bone, gut, and kidney. In these “nonclassic” tissues, 1,25(OH)2D exerts a number of actions including regulation of the secretion of PTH, insulin, and renin, dendritic cell as well as T-cell differentiation, and proliferation and differentiation of a number of cancer cells. Thus, the clinical utility of 1,25(OH)2D and its analogs is expanding.