Parathyroid hormone (PTH) is a single-chain peptide hormone composed of 84 amino acids. It is produced in the parathyroid gland in a precursor form of 115 amino acids, the remaining 31 amino terminal amino acids being cleaved off before secretion.

Parathyroid hormone (PTH) is a single-chain peptide hormone composed of 84 amino acids. It is produced in the parathyroid gland in a precursor form of 115 amino acids, the remaining 31 amino terminal amino acids being cleaved off before secretion. Within the gland is a calcium-sensitive protease capable of cleaving the intact hormone into fragments, thereby providing one mechanism by which calcium limits the production of PTH. A second mechanism involves the calcium-sensing receptor which, when stimulated by calcium, reduces PTH production and secre-tion. The parathyroid gland also contains the vitamin D receptor and the enzyme, CYP27B1, that produces the active metabolite of vitamin D, 1,25-dihydroxyvitamin D (1,25(OH)2D) thus enabling circulating or endogenously produced 1,25(OH)2D to suppress PTH production. Biologic activity resides in the amino terminal region such that synthetic PTH 1-34 (available as teri-paratide) is fully active. Loss of the first two amino terminal amino acids eliminates most biologic activity.

The metabolic clearance of intact PTH is rapid, with a half-time of disappearance measured in minutes. Most of the clearance occurs in the liver and kidney. The inactive carboxyl terminal frag-ments produced by metabolism of the intact hormone have a much lower clearance, especially in renal failure. In the past, this accounted for the very high PTH values observed in patients with renal failure when the hormone was measured by radioimmunoas-says directed against the carboxyl terminal region. Currently, most PTH assays differentiate between intact PTH 1-34 and large inac-tive fragments, so that it is possible to more accurately evaluate biologically active PTH status in patients with renal failure. 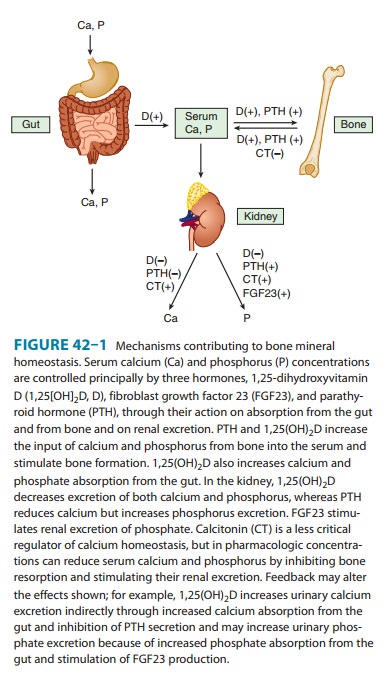 However, this stimulation of osteoclasts is not a direct effect. Rather, PTH acts on the osteoblast (the bone-forming cell) to induce membrane-bound and secreted soluble forms of a protein called RANKligand (RANKL). RANKL acts on osteoclasts and osteoclast pre-cursors to increase both the numbers and activity of osteoclasts. This action increases bone remodeling, a specific sequence of cel-lular events initiated by osteoclastic bone resorption and followed by osteoblastic bone formation. An antibody that inhibits the action of RANKL has been developed (denosumab) for the treat-ment of excess bone resorption in patients with osteoporosis and certain cancers. Although both bone resorption and boneformation are enhanced by PTH, the net effect of excess endoge-nous PTH is to increase bone resorption. However, administra-tion of exogenous PTH in low and intermittent doses increases bone formation without first stimulating bone resorption. This net anabolic action may be indirect, involving other growth fac-tors such as insulin-like growth factor 1 (IGF-1). It has led to the approval of recombinant PTH 1-34 (teriparatide) for the treat-ment of osteoporosis. In the kidney, PTH increases tubular reab-sorption of calcium and magnesium but reduces reabsorption of phosphate, amino acids, bicarbonate, sodium, chloride, and sul-fate. Another important action of PTH on the kidney is stimula-tion of 1,25-dihydroxyvitamin D (1,25[OH]2D) production.