There are three major video systems in use today:

When the video recorders were first introduced, Philips also developed a system called V2000. Despite the fact that is was a high quality system, it was not successful in the market.

Although Betamax was reasonably successful at first, its popularity waned and VHS was adopted as the world standard.

The Sony Betamax System, launched in 1975, was based on the pre-existing professional Sony U-matic-system. In the Betamax system, the video tape is guided along the head drum in a U-shape for all tape guidance functions, such as recording, playback and fast forward/backward.

When the cassette is inserted, the tape is guided around the head drum (called threading). Threading the tape takes a few seconds, but once the tape is threaded, shifting from one tape function to another can be achieved rapidly and smoothly.

JVC's VHS S ystem was introduced one year after the launch of Betamax. In VHS, the tape is guided through in an M-shape; the so-called M-tape guidance system.

This problem is being solved by "Quick-start" VHS video recorders, which allow fast and silent changes in tape guidance functions. To avoid excessive wear, M-tape guidance system recorders are provided with an automatic switch-off feature, activated some minutes after the recorder is put on hold, which automatically unthreads the tape.

An improvement of the basic VHS system is HQ (High Quality) VHS.

In the VHS system different starting points were used than in Betamax, such as track size and relative speed. VHS has rather wide video tracks, but a slightly lower relative tape speed, and that also counts for the audio track. In general, the advantages of one aspect are tempered by the disadvantages of the other.

The end result is that there is not too much difference between the sound and image qualities of both systems. 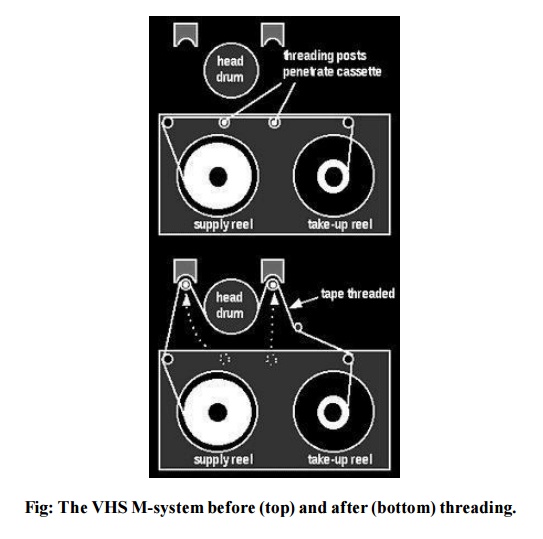 As a direct addition to the Video-8 camcorders, there is a third system: Video Hi8, which uses a smaller cassette than VHS and Betamax.

The sound recording takes place digitally, making its sound quality very good. When using the special Hi8 Metal Tape, the quality of both image and sound are equivalent to that of Super-VHS.

The Video-Hi8-recorder can also be used to make audio recordings (digital stereo) only. Using a 90 minute cassette, one can record 6 x 90 minutes, making a total of 18 hours of continuous music.

The video Hi8-system also allows manipulating digital images, such as picture-in-picture and editing. Video Hi8 uses a combination of the M- and U-tape guidance system.