The main purpose of the video recorder is recording and replaying video and audio signals. Although built-in tuners and timers have become integral parts of the average video recorder, they are not prerequisites for reaching the main goal: audio and video registration and playback.

The main purpose of the video recorder is recording and replaying video and audio signals. Although built-in tuners and timers have become integral parts of the average video recorder, they are not prerequisites for reaching the main goal: audio and video registration and playback.

In an audio cassette deck, which only registers audio signals, the tape passes over a static recording/playback head at constant speed.

The higher the speed of the tape, the more tape particles pass the head opening and the higher the frequencies that can be registered. Thanks to the extremely narrow head opening, it is possible to record and play back the entire tone range, up to 18,000 or 20,000 Hz, despite a slow tape speed of no more than 4.75 centimeters per second.

However, to register video signals, a range of 3.2 MHz is required and so a tape speed of approximately 5 meters per second is a prerequisite. This is over 100 times as fast as the tape speed for an audio cassette deck.

The required high recording speed for video recorders is realized by the helical scan system without such high tape speeds. The system basically consists of a revolving head drum, that has a minimum of two video heads.

The head drum has a diameter of approximately 5 cm and rotates at a speed of 1500 revolutions per minute. The 1/2" (12.65 mm) wide videotape is guided around half the surface of this drum, in a slightly oblique manner. This is achieved by positioning the head drum at a slight angle.

The tape guidance mechanism then ensures that the tape is guided through the device at a speed of approximately 2 cm per second (half of the low tape speed that is used in audio cassette decks).

In the meantime, the rapidly revolving video heads write narrow tape tracks of no more than 0.020 to 0.050 mm wide on the tape, next to each other, diagonally. Every half revolution, each of the two heads writes one diagonal track which equals half an image. The first head writes one track, i.e., the first field (the odd numbered scanning lines).

The second head writes a second track, i.e., the other half of the image (the second field: the even numbered scanning lines), which precisely fits in the first image. This corresponds to the interlacing principle, as applied in television.

One full revolution of both heads results in two diagonal tracks right next to each other, together forming one entire image scan (a frame). This means that two apparently contradictory requirements can be realized simultaneously: low tape speed of only 2 cm per second and at the same time a high registration speed (relative tape speed) of no less than 5 meters per second.

These two requirements make it possible to record the high video frequencies up to 3.2 MHz. At the same time, the low tape speed gives a time capacity up to three hours.

The revolutionary speed of the head drum and the video heads needs to maintain a constancy within strict parameters. Moreover, the tracks must be scanned during playback in precisely the same way as they were recorded.

Each tape track is synchronized at the recording stage by means of field synchronization pulses. These pulses are generated in the video recorder by a separate head which are recorded on a separate narrow track at the side of the video tape.

This is called the synchronization, servo or control track. 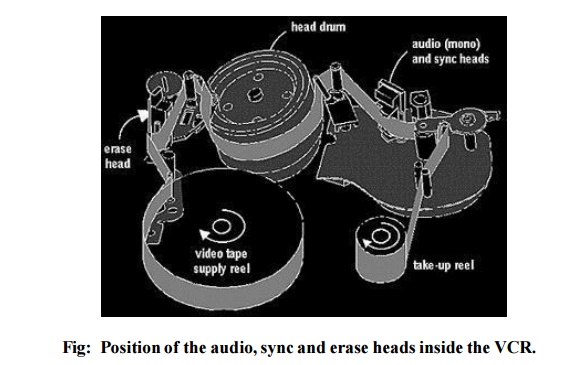