An entirely different daily rhythm of migration that appears largely dependent on light levels is the vertical migration undertaken by numerous fish species in both marine and freshwater habitats.

An entirely different daily rhythm of migration that appears largely dependent on light levels is the vertical migration undertaken by numerous fish species in both marine and freshwater habitats. In most fi shes, this movement involves an upward migration  at dusk to feed and a downward migration at dawn. For  example, Alewives (Alosa pseudoharengus, Clupeidae)  migrate upwards in lakes in the evening at a rate that parallels the migration of their prey, a mysid shrimp. Zooplankton often migrate to the surface at night to take advantage  of reduced visual acuity in visually hunting zooplanktivorous fi shes. Predator avoidance could also explain vertical movements in many larval and juvenile fi shes (e.g., Sockeye Salmon, Walleye Pollock); by remaining in dark, deep waters by day, vertical migrators can avoid visually orienting, diurnal predators. 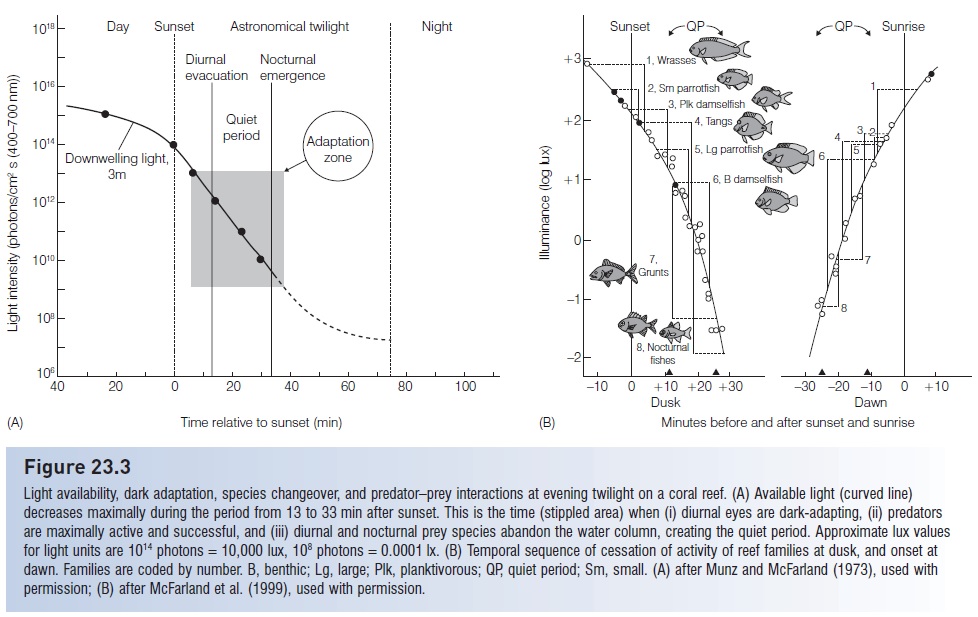 Light availability, dark adaptation, species changeover, and predator–prey interactions at evening twilight on a coral reef. (A) Available light (curved line) decreases maximally during the period from 13 to 33 min after sunset. This is the time (stippled area) when (i) diurnal eyes are dark-adapting, (ii) predators are maximally active and successful, and (iii) diurnal and nocturnal prey species abandon the water column, creating the quiet period. Approximate lux values for light units are 1014 photons =10,000 lux, 108 photons =0.0001 lx. (B) Temporal sequence of cessation of activity of reef families at dusk, and onset at dawn. Families are coded by number. B, benthic; Lg, large; Plk, planktivorous; QP, quiet period; Sm, small. (A) after Munz and McFarland (1973), used with permission; (B) after McFarland et al. (1999), used with permission.

Vertical migration could also increase a fish’s encounter rate with plankton if currents differ at the surface versus at depth. Many oceanic regions are characterized by surface currents that flow in one direction and deeper waters that flow in a different direction, if at all. By swimming down, a fish can remain in relatively stationary, deep waters by day as the surface currents replenish the food supply in the waters above, a scenario analogous to feeding off a moving conveyor belt. It has also been postulated but not demonstrated that fishes could gain an energetic advantage by moving into warm surface waters to feed actively and then returning to cooler, deeper waters to metabolize and grow (McLaren 1974; Janssen & Brandt 1980; McKeown 1984; Nielson & Perry 1990).

Not all diel activity cycles relate only to feeding and predator avoidance. The timing of spawning is quite predictable for many species and even families. Diurnal spawners include many minnows, sunfishes, darters, cichlids, and wrasses. Twilight spawning characterizes some damselfishes (dawn) and butterfl yfishes, wrasses, parrotfishes, and bothid flounders (dusk). Nocturnal spawning, not surprisingly, is difficult to observe but is known in the Yellow Perch, which is a strongly diurnal feeder.