Tidal cycles are caused by the gravitational pull of the moon and to a lesser extent the sun on the oceanic water mass.

Tidal cycles are caused by the gravitational pull of the moon and to a lesser extent the sun on the oceanic water mass. Most coastlines experience a semidiurnal tidal regime that involves two high tides and two low tides each day, highs and lows being separated by about 6.2 h. Relatively strong, spring and relatively weak, neap tides occur at biweekly intervals. Daily tidal ranges can vary from a few centimeters to several meters depending on locale. Any marine animal that lives in the intertidal zone must either move out of the area in anticipation of or with lowering water levels, or face desiccation. Movements in general have to be synchronized with the fall and rise of tides. A drop in hydrostatic water pressure from a smaller overlying water column could serve as an external cue of a falling tide, and flooding of a pool could indicate an incoming tide. However, most intertidal animals, including fishes, appear to anticipate tidal changes via an internal clock that is reset by exogenous (external) cues (see above and Fig. 23.4).

Shallow intertidal areas – mud flats, saltmarshes, seagrass beds, mangroves, reef flats, or the rocky intertidal – are among the most productive regions in the sea. Plants grow rapidly in warm, shallow water, resulting in an abundant food base. Shallow depths mean that large aquatic predators are relatively scarce. These conditions create a relative bonanza for fish species that can adapt to the physiological conditions within the intertidal region. 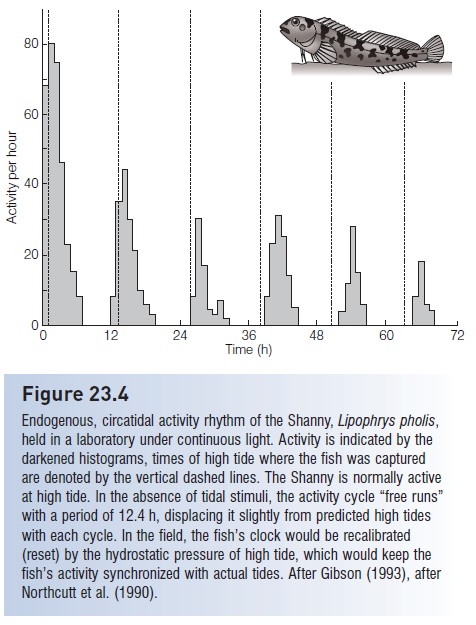 Endogenous, circatidal activity rhythm of the Shanny, Lipophrys pholis, held in a laboratory under continuous light. Activity is indicated by the darkened histograms, times of high tide where the fish was captured are denoted by the vertical dashed lines. The Shanny is normally active at high tide. In the absence of tidal stimuli, the activity cycle “free runs” with a period of 12.4 h, displacing it slightly from predicted high tides with each cycle. In the field, the fish’s clock would be recalibrated (reset) by the hydrostatic pressure of high tide, which would keep the fish’s activity synchronized with actual tides. After Gibson (1993), after Northcutt et al. (1990).

Tidalregions are by definition fluctuating environments, except that most fluctuations occur with predictable periodicity. Hence animals can capitalize on the fluctuations, or at least adapt to predictable environmental constraints. Falling tides in particular create numerous problems for fishes, including desiccation, rapid changes in and exposure to extreme temperatures, pH, and salinity, and exposure to terrestrial and aerial predators. Fishes generally follow one of two courses in dealing with low tide conditions: they either abandon shallow water with falling tides, or they remain in the intertidal area and seek shelter in cracks, algae, under rocks, or in pools (Gibson 1992, 1993; Horn & Martin 2006).

The former, termed visiting species, migrate in and out with the tides. This is particularly common with the many species that use intertidal areas as nursery grounds or refuges for juvenile fishes. Saltmarsh creeks along the Atlantic coast of North America serve as such nurseries for numerous species of worm eels, herrings, croakers, porgies, mullets, and flatfishes, as well as housing adults of dozens of other species. Approximately 80% of the commercial landings from the US Atlantic and Gulf of Mexico fisheries consists of species that spawn offshore and use saltmarshes for nurseries (Shenker & Dean 1979; Weinstein 1979; Miller et al. 1985). Juvenile fishes slosh in and out of the intertidal zones, being carried out of a marsh creek with the outgoing tide and back in again with the flood tide. Analogous tidal nursery situations exist in many parts of the world, such as mangroves in most tropical areas and the tidal swamps of western and northern Australia, which are used by juveniles of 24 families of fishes (Davis 1988). Adults of coral reef species also show on–off reef movements that correspond with tides. Low tides on hot days can create hot, anoxic conditions over large sections of reef and sandy tidal flats. Such areas are commonly avoided during low tides but reoccupied by fishes that move back onto the reef from the deeper reef face or from channels as cooler, oxygenated water floods the region during incoming tides.

Intertidal resident species remain in the intertidal zone at low tide and hide in areas insulated from complete desiccation, or make periodic visits into water or spray zones. Residents show the greatest degree of adaptation to the intertidal environment. Most are relatively small (<20 cm), which allows them to hide in holes and cracks or under piles of vegetation (pricklebacks, gunnels, sculpins, clingfishes, blennioids, gobies), and also presents less surface area to turbulence. Bodies are either thin and elongate (gunnels, pricklebacks, clinids) or depressed (sculpins, clingfishes). Elongate bodies are effective at cramming into tiny places. The intertidal zone is frequently exposed to breaking waves, particularly during high tides, and depressed body morphologies of many species are convergent with those of fishes that live in other high-energy environments such as river rapids (e.g., Asian hillstream loaches, loach gobies, New Zealand Torrentfish;  Strong currents and turbulent water). Suction cups, formed by fused pelvic fins, occur convergently in clingfishes, snailfishes, and gobies. Also convergent in fishes dwelling in high-energy and bottom areas is negative buoyancy, achieved through a missing or greatly reduced swim bladder. Some intertidal residents have evolved extreme tolerance to water loss: clingfishes can live up to 4 days out of water if humidity exceeds 90% and can sustain as much as 60% loss of total water content. This tolerance exceeds that of many amphibians. Gobiid mudskippers of the tropical Indo- Pacific spend 80–90% of their time out of water, being submerged and inactive only during high tides (Horn & Gibson 1988; Gibson 1992).

Tidal activity cycles in many fishes have an apparent endogenous basis. European Shanny, Lipophrys pholis (Blenniidae) and Goby,Gobius paganellus (Gobiidae) held in the laboratory under constant conditions still show an activity pattern that corresponds to a semidiurnal tidal regime (see above). They rest at the local time of low tides and swim actively at the expected times of high tides (see Fig. 23.4). Similar patterns, also known from anguillid eels, Tomcod (Gadidae), clingfishes, killifishes, sculpins, mudskippers, and flatfishes, appear to reflect an internal circatidal clock with a period of about 12 h, but one cannot completely rule out the possibility that the fishes are sensing fluctuations in the gravitational pull of the moon and sun. The clock may be reset by changing water depth, which in the field would correlate with fluctuating hydrostatic pressure caused by alterations in the weight of the water column above the fish (Gibson 1982, 1992).

Activity cycles in many intertidal species are constrained by the cyclical nature of oxygen availability. Photosynthesis during the day oxygenates the water, but both plants and animals consume oxygen at night. Hence many intertidal fishes have an ability to breath air (Horn & Martin 2006) and many reduce their activity, and their oxygen consumption, at night (Horn & Gibson 1988). Tides may override normal activity patterns for species that occur in a variety

of habitats. American Eels, which are strongly nocturnal in nontidal habitats, travel with tidal currents by day and swim against them while foraging at night. Both Eels and killifish capitalize on tidal flooding to gain access to the food resources of the saltmarsh surface, eels by night and killifish by day (Weisberg et al. 1981; Helfman et al. 1983). Conversely, intertidal fishes that live in regions with very minimal tidal ranges, as in the Mediterranean, synchronize their activity patterns with day–night cycles instead of with tides (Gibson 1993).

Utilization of inshore areas by larval and juvenile fishes creates a particular logistic problem related to tidal cycles. Water flow is favorable for entry into such areas during only half of the tidal cycle; for much of the time, small fishes must fight outflowing currents of several knots, impeding or reversing any progress they may have made. Fishes overcome this problem by engaging in selective tidal stream transport or modulated drift (e.g., Wippelhauser & McCleave 1987; Forward & Tankersley 2001). Typically, immigrant fishes move up into the water column on incoming tides, but move down close to the bottom on outgoing tides. They are consequently carried inshore with incoming currents, but minimize slipping back offshore by taking advantage of reduced ebb currents as water is slowed by bottom topography and friction. They thus “ratchet” themselves into the estuary. Selective tidal stream transport has been observed in post-larval American eels, spot (Sciaenidae), and flounders. Adult anguillid eels, cod, and flatfishes on spawning migrations use similar transport mechanisms to move along the shore or in open water. Selective tidal stream transport could be adaptive as a directional aid and also reduces the energy and time required to reach a particular locale; the response might be driven by an endogenous circatidal clock, as discussed in the previous section (Miller 1988; Gibson 1992; Forward & Tankersley 2001; Metcalfe et al. 2006;, Getting from here to there: larval transport mechanisms).