The 24 h, diel, or daily periodicity of the earth’s rotation creates a predictable pattern of light and darkness that has a profound effect on the biology of almost all animals and plants.

The 24 h, diel, or daily periodicity of the earth’s rotation creates a predictable pattern of light and darkness that has a profound effect on the biology of almost all animals and plants. Organisms are cued externally by sunrise and sunset; by day, night, or twilight length; or their activities are determined by an internal clock with a roughly 24 h period that may be reset by some external light cue.

Activity patterns in fishes generally represent a direct response to changing light levels, but are also affected by the activity patterns of their predators and prey (McFarland et al. 1999). In most environments, fishes are diurnal and tend to feed primarily during the day or are nocturnal and feed by night, while some feed primarily duringcrepuscular periods of twilight and fewer still show no periodicity (Table 23.1). On average, about one-half to two-thirds of the species in an assemblage will be diurnal, one-quarter to one-third are nocturnal, and about 10% are crepuscular (e.g., Helfman 1993; Lowe & Bray 2006) (Fig. 23.1). These distinctions are sharpest at tropical latitudes, where families can often be characterized as diurnal, nocturnal, or crepuscular (Hobson 1991; Helfman 1993). On coral reefs, herbivorous fishes are almost exclusively diurnal, for reasons that remain unclear but may relate to the need to visually identify edible and inedible algae. Parrotfishes,

surgeonfishes, rabbitfishes, and sea chubs roam the reef, often in large shoals. They feed on algae and seagrass, some of which is defended by territorial damselfishes, parrotfishes, and blennies. Fishes that feed primarily on encrusting sponges, tunicates, corals, and hydrozoans are also largely diurnal; this group includes angelfishes, butterfl yfishes, pufferfishes, and triggerfishes. Many wrasses, butterfl yfishes, goatfishes, mojarras, and small seabasses eat mobile or buried invertebrates (e.g., small crustaceans and polychaete worms) and are also diurnal.

Diel activity patterns – defined as when fishes feed – of better known groups and families of teleostean fishes. For many families, activity patterns are only known for a few species. Some large families appear under more than one heading because of intrafamilial variability. From Helfman (1993) and other sources, especially Lowe and Bray (2006). 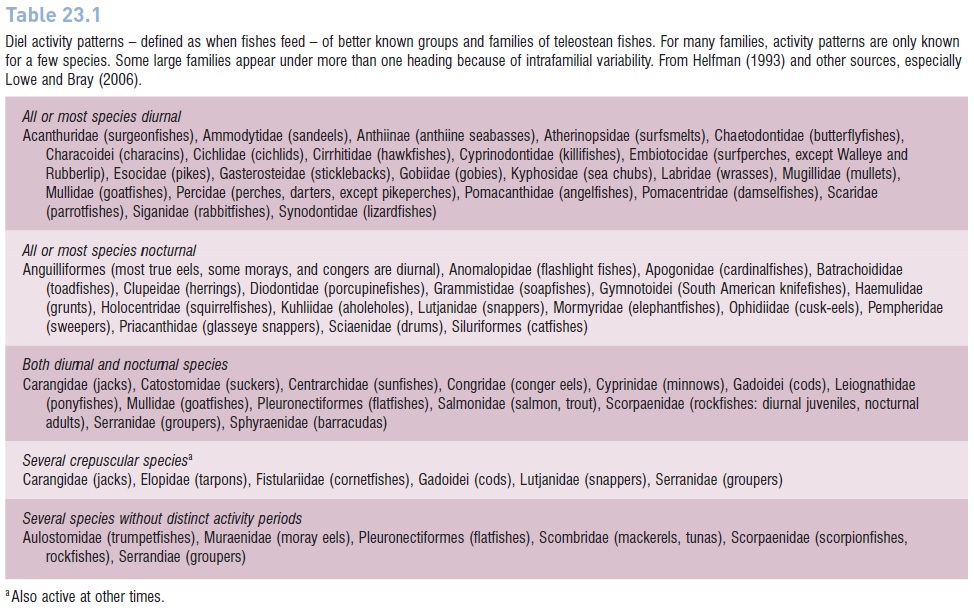 Zooplanktivores are particularly abundant and conspicuous during the day, including anthiine seabasses, damselfishes, wrasses, fusiliers, and butterfl yfishes. Zooplanktivores also form large shoals, but these aggregations often remain over a particular section of the reef and wait for currents to bring planktonic prey to them; congrid garden eels similarly “aggregate” their burrows and feed on passing zooplankters (see Fig. 22.7). A small group of piscivores, including lizardfishes, trumpetfishes, cornetfishes, scorpionfishes, jacks, hawkfishes, barracuda, and flatfishes, are active primarily during daylight. Cleaning fishes that pick external parasites from other fishes (wrasses, gobies, and juvenile angelfishes and butterfl yfishes) are active by day (see  Interspecific relations: symbioses). However, some of the largest shoals of fishes encountered by day in tropical waters are nonfeeding, resting shoals of nocturnal foragers. Sometimes numbering in the millions, aggregations of zooplanktivorous silversides, anchovies, and herrings frequently hover near structure or in sandy embayments (Parrish 1992). They may be subjected to attacks by roving seabasses, jacks, and tunas. Better protected are the daytime resting shoals of invertebrate-feeding squirrelfishes, copper sweepers, cardinalfishes, and grunts, which occur over coral or in caves (Fig. 23.2). 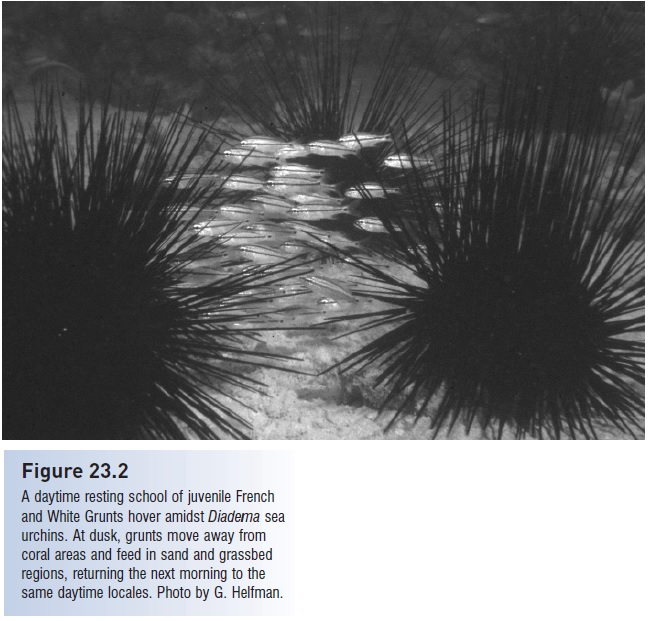 A daytime resting school of juvenile French and White Grunts hover amidst Diadema sea urchins. At dusk, grunts move away from coral areas and feed in sand and grassbed regions, returning the next morning to the same daytime locales. Photo by G. Helfman. 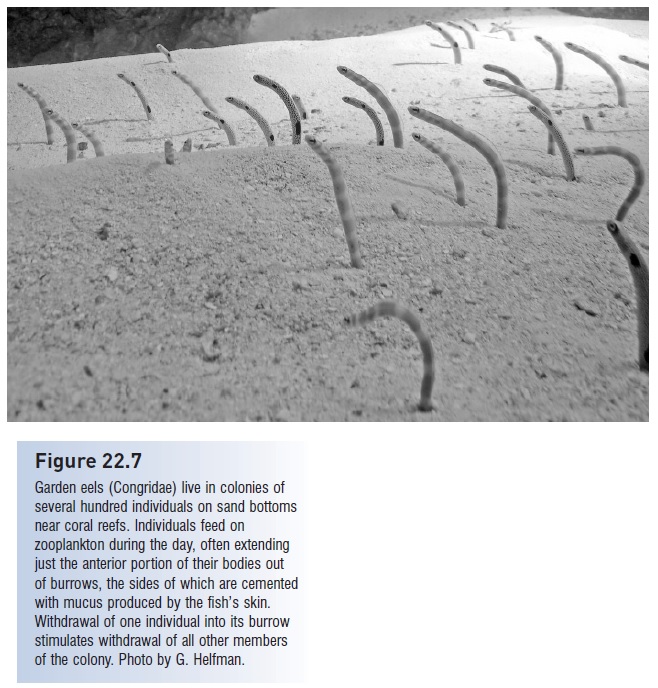 The prey resources available by day on a coral reef change dramatically at night (Hobson 1991, 2006). Many invertebrates bury themselves in the sand or in small holes in the coral, whereas others come out of hiding and move about the reef and into the water column. The maximum size of zooplankton increases substantially from relatively small (<1 mm long) diurnal forms to larger (>2 mm long) nocturnal animals; these larger invertebrates make up most of the diet of nocturnal zooplanktivores. Almost all no cturnally active fishes are carnivorous, feeding on mobile invertebrates that they locate and engulf with relatively large eyes and large mouths. Grunts, snappers, porgies, and emperors are generally found close to the bottom, whereas zooplanktivorous anchovies, herrings, silversides, squirrelfishes, cardinalfishes, glasseye snappers, and copper sweepers forage higher in the water column. Nocturnal zooplanktivores rely heavily on vision to find their prey and feed successfully even at relatively low light levels (e.g., Holzman & Genin 2003).

Predation pressure on fishes at night compared to day apparently varies as a function of habitat, with near-bottom predation greater but water column predation lessened (e.g., Danilowicz & Sale 1999; but see Sancho et al. 2000a). The piscivores that roam the reef after nightfall include various eels, sharks, squirrelfishes, snappers, groupers, and jacks (e.g., Young & Winn 2003). An apparent reduction in predation in the water column is reflected in the morphology of nocturnal planktivores, which tend to be less streamlined than their diurnal counterparts, and also in a general lack of shoaling behavior at night by either nocturnal or diurnal species.

Successful feeding by piscivores occurs primarily during the transitional periods of evening and morning twilight, when diurnal and nocturnal groups essentially replace one another ecologically. Crepuscular predators include tarpon, cornetfishes, groupers, snappers, and jacks, but can also include smaller species such as lizardfishes, squirrelfishes, grunts, and pinguipedid sandperches (e.g., Holbrook & Schmitt 2002). Although their activities are concentrated at this time, most of these fishes, and predatory fishes in general, are highly opportunistic and will take prey any time of the day or night.

Fishes in other habitats and latitudes vary in the predictability of their daily activity cycles. Tantalizingly little is known about tropical freshwater assemblages (Lowe- McConnell 1987). Characins, cyprinids, and cichlids are predominantly diurnal, catfishes nocturnal, but beyond such generalizations our knowledge is relatively limited. Poeciliids as a group are usually considered diurnal, but recent work in Trinidad suggests greater flexibility than that usually portrayed. Guppies in streams that contain predators such as the erythrinid Trahira or Wolffish, Hoplias malabaricus, are in fact diurnal feeders, ceasing activity and moving to stream edges at dusk. But whereHoplias does not occur, Guppies feed actively at night, show better growth rates, and engage in more courtship (Fraser et al. 2004). Guppies are among the best studied fishes behaviorally, including both field and laboratory manipulations. Perhaps when such manipulations or greater studies are performed on other groups that we view as invariant in their diel activities, we will discover greater plasticity (e.g., Reebs 2002).

At higher latitudes, activity cycles are similar in some respects but notably different in others. In temperate lakes, familial distinctions are weaker than on coral reefs. Diurnal zooplanktivores are abundant (minnows, sunfishes, perches) and have nocturnal counterparts among the herrings, minnows, whitefishes, and sunfishes (Helfman 1981b, 1993). Herbivores are relatively rare. Diurnal invertebrate feeders include minnows, suckers, mudminnows, topminnows, sunfishes, and perches. Their nocturnal counterparts include eels, catfishes, trout, sculpins, sunfishes, and drums. Piscivores, which again have an activity peak at twilight, are represented during the day by pickerels, Pike, and black basses and at night by Bowfin, salmonids, Burbot, temperate basses, sunfishes, and pikeperches. Nocturnal fishes rest by day amidst vegetation or other structure or form daytime resting shoals. Diurnal fishes often sink to the bottom and rest in relatively exposed locations at night.

Nearshore California kelp beds and rocky reefs also contain diurnal, nocturnal, and crepuscular species, but again familial distinctions are blurred (Ebeling & Hixon 1991; Lowe & Bray 2006). By day, shoaling zooplanktivores are abundant (silversides, seabasses, surfperches, damselfishes, wrasses, scorpionfishes), as are diurnal invertebrate feeders (seabasses, surfperches, clinids, gobies); these groups have nocturnal equivalents among the scorpionfishes, grunts, croakers, and surfperches that feed on relatively large prey both near and above the bottom. Herbivores are relatively rare, although they are more abundant in shallower, intertidal areas (blennies, pricklebacks, gobies; Horn 1989). Piscivores (seabasses, scorpionfishes,greenlings) are active primarily during twilight or nighttime; many scorpaenid rockfishes are diurnal as juveniles but nocturnal as adults (Lowe & Bray 2006). Nocturnal fishes form daytime resting aggregations, and diurnal fishes rest at night either in holes or in exposed locales.

At temperate latitudes, twilight changeover patterns  are more variable compared to coral reef species. Activity patterns of temperate lake and kelp bed fishes are less precise in that: (i) many species feed both diurnally and nocturnally; (ii) reputedly diurnal and nocturnal species overlap in activity times; (iii) species within a family vary in major periods of activity; and (iv) individuals within a species vary in twilight changeover activities. Such variation could result from longer twilight lengths at higher latitudes, where dark adaptation of a fish’s eye keeps pace with the rate of light change and hence diurnal species can maintain activity well into twilight and nocturnal species can commence activity before twilight ends. A latitudinal gradient in twilight length could interact with reduced predation pressure, reduced species diversity, or greater climatic instability to produce the relatively “unstructured” temporal patterns at higher latitudes (Helfman 1993; Lowe & Bray 2006).

The above discussion focuses on active animals. However, inactivity accounts for half the diel cycle in most fishes, which often prompts the question of whether or not fish sleep. Sleep occurs when a fish assumes a typical resting posture for a prolonged period, uses some form of shelter, and is relatively insensitive to disturbance (Reebs 1992, 2001, 2002). By this definition, many species sleep, including dasyatid stingrays, minnows, bullhead catfishes, butterfl yfishes, cichlids, mullet, wrasses, and surgeonfishes. Croakers apparently do not sleep. Some parrotfishes and wrasses secrete a mucus envelope around themselves at night while sleeping, a behavior that has been subjected to much speculation. The mucus cocoon may thwart roving nocturnal predators such as moray eels by concealing odors or serve as an early warning, given that the parrotfish dashes out of the mucus envelope when it is touched (Videler et al. 1999). It may also have antibacterial or antiparasitic properties (Shephard 1994), or it may be an incidental byproduct of mucus production that occurs throughout the diel cycle but does not accumulate during the day because the fish are continually active (J. E. Randall, pers. comm.). The barrier, however, fails as a deterrent to attacks by snails, such as the dwarf triton Colubraria, which pierces the cocoon and the fish with its proboscis and sucks blood from the sleeping parrotfish (Bouchet & Perrine 1996).

The adaptive signifi cance of sleep in fishes remains a matter of debate. One likely function is immobilization during a period when an animal is relatively inefficient at both foraging and predator avoidance. Hence energy is conserved and predators avoided, assuming some refuge is found before a quiescent state is assumed (Reebs 1992).