One postulated function of cyclical behavior is the opportunity that it affords individuals to synchronize their behavior with that of conspecifics. Nowhere is such synchronization more obvious and necessary than in reproduction.

One postulated function of cyclical behavior is the opportunity that it affords individuals to synchronize their behavior with that of conspecifics. Nowhere is such synchronization more obvious and necessary than in reproduction. Not only must both sexes aggregate at the same locale to release gametes, but preparatory events of gametogenesis (gamete production) and secondary sex character development must also occur with similar timetables that converge on the same small time window. Predictable external cues that occur over biologically appropriate time periods are prime candidates as drivers of such cycles. The monthly orbit of the moon is a particularly common Zeitgeber because of its predictability, but also because of the direct links among lunar phase, nocturnal illumination, and tidal and current strength.

An illustrative example of this interrelationship involves the grunion, Leuresthes tenuis (Atherinopsidae), that spawn literally on the beaches of southern and Baja California (Fig. 23.5;, The spawning act). Grunion spawn after high tides on the three or four dark nights following a full or new moon during the spring and summer, the time when highest tides occur at night (Walker 1952; Martin & Swiderski 2001; Martin et al. 2004). These lunar periods correspond to spring tides, when water is pushed to its maximum height up the beaches. The same wave cover will not occur for at least 2 weeks. Females ride waves up the beach, dig with their tails into the wet sand, and deposit eggs. 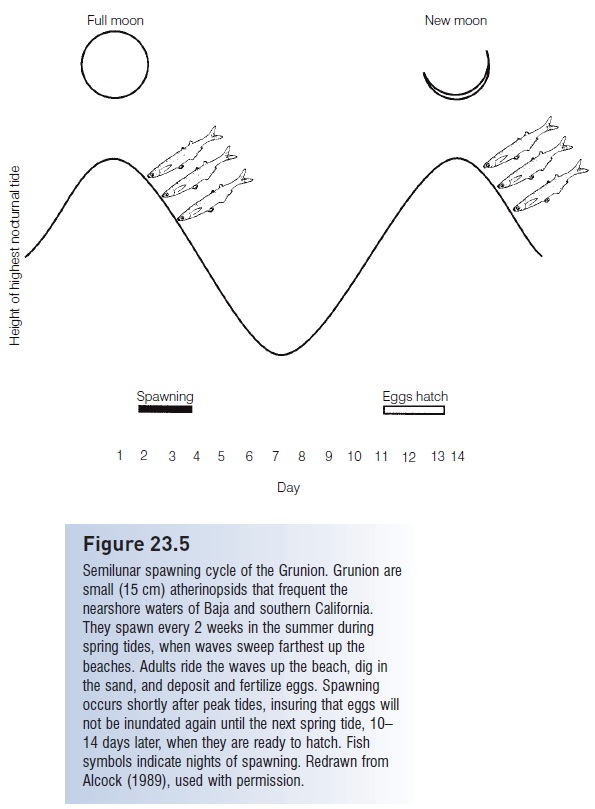 Semilunar spawning cycle of the Grunion. Grunion are small (15 cm) atherinopsids that frequent the nearshore waters of Baja and southern California. They spawn every 2 weeks in the summer during spring tides, when waves sweep farthest up the beaches. Adults ride the waves up the beach, dig in the sand, and deposit and fertilize eggs. Spawning occurs shortly after peak tides, insuring that eggs will not be inundated again until the next spring tide, 10– 14 days later, when they are ready to hatch. Fish symbols indicate nights of spawning. Redrawn from Alcock (1989), used with permission.

Males deposit sperm around the females. The eggs normally develop in the moist sand for about 10 days. They will not hatch until the next spring tides, when waves once again cover the higher portions of the beach and the agitation of the breaking waves stimulates hatching (Griem & Martin 2000). If waves do not reach the eggs, they can delay hatching for an additional 2 weeks (gonad maturation is, however, on an 18-day, not 14-day, cycle). Spring tides promote synchronization of male and female behavior, allow a suffi cient 2-week interval for embryogenesis, and facilitate spawning under the cover of darkness which may lessen predation on adults. The eggs are deposited where further wave action will not expose them for 2 weeks, again potentially reducing predation. A second grunion species, L. sardina, engages in similar behavior but spawns both day and night. In its Sea of Cortez locale, spawning coincides with the period of highest tides.

Grunion reproduction is an example of semilunar periodicity; such cycles usually involve a 14.7-day interval. Synchronization with a period of maximum spring tides is common in fishes with semilunar, lunar, or longer cycles. Two groups with such rhythms are intertidal spawners and coral reef spawners. Intertidal spawners include the grunions as well as a southern hemisphere whitebait,Galaxias attenuatus, Surf Smelt (Hypomesus), Capelin (Mallotus), a stickleback (Gasterosteus), silversides (Menidia), killifishes (Fundulus), four-eyed fish (Anableps), and a Japanese pufferfish (Fugu) (Martin & Swiderski 2001). Intertidal spawners deposit eggs during spring high tides on sand or pebble beaches or amidst algal and root mats, leaf axils, and bivalve shells. Spawning often occurs on the days or nights following full or new moons. The eggs are exposed to air sometime during the next 2 weeks before the next spring tides, at which time they hatch. Smelt and killifish eggs actually require aerial incubation and will die if continually immersed, apparently because of relatively low oxygen concentrations in water. A reduction of aquatic predation on the eggs is often postulated as the primary selection pressure favoring intertidal spawning, although predation on puffer eggs is minimal due to their toxicity (Gibson 1978; Taylor 1984, 1990; Leatherland et al. 1992).

Gladstone & Westoby 1988; Robertson 1991; Domeier & Colin 1997; Takemura et al. 2004), although some species show no correlation with lunar period (e.g., Sponaugle & Pinkard 2004). Most larger coral reef species that spawn in the water column do so at twilight or at night during new or full moon or both, often on high or ebbing tides. Larger species move to deep water, often to form spawning aggregations at predictable locales. Smaller species rush momentarily into the water column above the reef. Both groups have pelagic eggs and larvae, and larvae return to reefs primarily during spring tides. Johannes (1978) postulated that such behavior serves to move eggs and larvae out of the range of the abundant benthic and demersal predators on the reef, basically exporting the eggs out of the adult habitat but not necessarily out to sea.

Other explanations for the periodicity and timing of coral reef fish spawning either focus on larval or adult biology. Larval hypotheses, in addition to those proposed by Johannes, include maximized dispersal of larvae to distant habitats, swamping or saturation of predators (such as Whale Sharks; Heyman et al. 2001), synchronization of larval production with production of invertebrate larvae on which they feed, reduction of competition among different larval cohorts, nocturnal spawning to minimize ultraviolet damage to floating eggs, and optimization of the timing of larval settlement in appropriate reef habitats. Adult biology hypotheses focus on synchronization of activities among spawners, optimization of the conditions under which adults spawn, and improvement of conditions for egg guarding in species that show parental care.

No single hypothesis explains reproductive timing in all species (Barlow 1981; Taylor 1984; Robertson et al. 1990; Gibson 1992; Sancho et al. 2000b), but larval biology hypotheses may pertain more to water column spawners and adult biology hypotheses may better explain selective forces acting on benthic spawners that guard their eggs. Proof by exception comes from studies of species with unpalatable eggs, larvae, and adults. The Sharpnose Puffer, Canthigaster valentini, is protected by noxious chemicals at all life history stages (Gladstone & Westoby 1988). It spawns near the bottom during the day throughout the year, shows no definitive cycling, has an unhurried courtship display, exhibits no parental care, and embryos hatch on incoming tides. Apparent liberation from predation has also removed the selection pressures that induce periodicity and other more usual spawning behaviors in reef fishes. Few direct tests of most hypotheses have been attempted and much exciting work remains to be done on this topic.

A variety of adaptive scenarios can be postulated for lunar cycles synchronized with spring tides in nearshore marine and estuarine fishes. More puzzling are lunar spawning cycles in some freshwater and high seas fishes. For example, two Lake Tanganyika cichlids spawn during full moons, which might minimize diurnal predation on eggs while enabling adults to monitor the activities of their own, nocturnal, catfish predators. An apparent semilunar spawning cycle in an offshore gadoid, Enchelyopus cimbrius, is even more puzzling, aside from synchronization of reproductive behavior among adults (Gibson 1978; Taylor 1984; Leatherland et al. 1992).