The most serious of all cardiac arrhythmias is ventricu-lar fibrillation, which, if not stopped within 1 to 3minutes, is almost invariably fatal.

When the normal cardiac impulse in the normal heart has traveled through the extent of the ventricles, it has no place to go because all the ventricular muscle is refractory and cannot conduct the impulse farther. Therefore, that impulse dies, and the heart awaits a new action potential to begin in the atrial sinus node.

Under some circumstances, however, this normal sequence of events does not occur. Therefore, let us explain more fully the background conditions that can initiate re-entry and lead to “circus movements,” which in turn cause ventricular fibrillation. 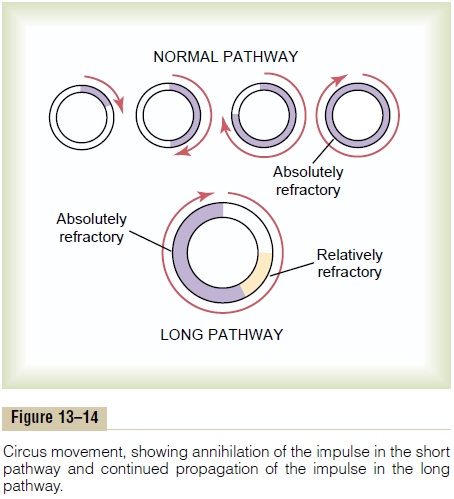 Figure 13–14 shows several small cardiac muscle strips cut in the form of circles. If such a strip is stimu-lated at the 12 o’clock position so that the impulse travelsin only one direction, the impulse spreads progressivelyaround the circle until it returns to the 12 o’clock posi-tion. If the originally stimulated muscle fibers are still in a refractory state, the impulse then dies out because refractory muscle cannot transmit a second impulse. But there are three different conditions that can cause this impulse to continue to travel around the circle, that is, to cause “re-entry” of the impulse into muscle that has already been excited. This is called a “circus movement.”

Second, if the length of the pathway remains constant but the velocity of conduction becomes decreased enough, an increased interval of time will elapse before the impulse returns to the 12 o’clock position. By this time, the originally stimulated muscle might be out of the refractory state, and the impulse can continue around the circle again and again.

Third, the refractory period of the muscle mightbecome greatly shortened. In this case, the impulse couldalso continue around and around the circle.

All these conditions occur in different pathological states of the human heart, as follows: (1) A long pathway typically occurs in dilated hearts. (2) Decreased rate of conduction frequently results from (a) blockage of the Purkinje system, (b) ischemia of the muscle, (c) high blood potassium levels, or (d) many other factors. (3) A shortened refractory period commonly occurs in response to various drugs, such as epinephrine, or after repetitive electrical stimulation. Thus, in many cardiac disturbances, re-entry can cause abnormal patterns of cardiac contraction or abnormal cardiac rhythms that ignore the pace-setting effects of the sinus node.

In ventricular fibrillation, one sees many separate and small contractile waves spreading at the same time in different directions over the cardiac muscle. The re-entrant impulses in fibrillation are not simply a single impulse moving in a circle, as shown in Figure 13–14. Instead, they have degenerated into a series of multiple wave fronts that have the appearance of a “chain reac-tion.” One of the best ways to explain this process in fibrillation is to describe the initiation of fibrillation by electric shock caused by 60-cycle alternating electric current.

Fibrillation Caused by 60-Cycle Alternating Current. At acentral point in the ventricles of heart A in Figure 13–15, a 60-cycle electrical stimulus is applied through a stimulating electrode. The first cycle of the electrical stimulus causes a depolarization wave to spread in all directions, leaving all the muscle beneath the electrode in a refractory state. After about 0.25 second, part of this muscle begins to come out of the refractory state. Some portions come out of refractoriness before other  portions. 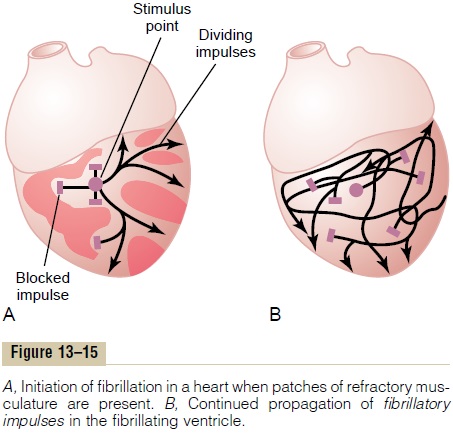 This state of events is depicted in heart A by many lighter patches, which represent excitable cardiac muscle, and dark patches, which represent still refrac-tory muscle. Now, continuing 60-cycle stimuli from the electrode can cause impulses to travel only in certain directions through the heart but not in all directions. Thus, in heart A, certain impulses travel for short dis-tances, until they reach refractory areas of the heart, and then are blocked. But other impulses pass between the refractory areas and continue to travel in the excitable areas. Then, several events transpire in rapid succession, all occurring simultaneously and eventuating in a state of fibrillation.

Second, the rapid stimulation of the heart causes two changes in the cardiac muscle itself, both of which pre-dispose to circus movement: (1) The velocity of conduc-tion through the heart muscle decreases, which allows alonger time interval for the impulses to travel around the heart. (2) The refractory period of the muscle isshortened, allowing re-entry of the impulse into previ-ously excited heart muscle within a much shorter time than normally.

Third, one of the most important features of fibrilla-tion is the division of impulses, as demonstrated in heart A. When a depolarization wave reaches a refractory area in the heart, it travels to both sides around the refractory area. Thus, a single impulse becomes two impulses. Then, when each of these reaches another refractory area, it, too, divides to form two more impulses. In this way, many new wave fronts are contin-ually being formed in the heart by progressivechainreactions until, finally, there are many small depolariza-tion waves traveling in many directions at the same time. Furthermore, this irregular pattern of impulse travel causes many circuitous routes for the impulses totravel, greatly lengthening the conductive pathway, which is one of the conditions that sustains the fibrillation. Italso results in a continual irregular pattern of patchy refractory areas in the heart.

Heart B in Figure 13–15 demonstrates the final state that develops in fibrillation. Here one can see many impulses traveling in all directions, some dividing and increasing the number of impulses, whereas others are blocked by refractory areas. In fact, a single electric shock during this vulnerable period frequently can lead to an odd pattern of impulses spreading multidirection-ally around refractory areas of muscle, which will lead to fibrillation. 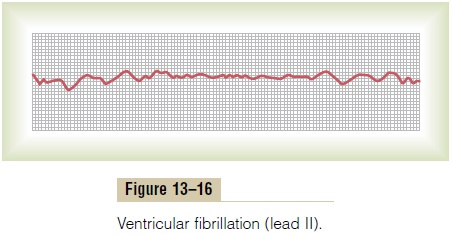 Electroshock Defibrillation of the Ventricles

Although a moderate alternating-current voltage applied directly to the ventricles almost invariably throws the ventricles into fibrillation, a strong high-voltage alternating electrical current passed through the ventricles for a fraction of a second can stop fibrillation by throwing all the ventricular muscle into refractori-ness simultaneously. This is accomplished by passing intense current through large electrodes placed on two sides of the heart. The current penetrates most of the fibers of the ventricles at the same time, thus stimulat-ing essentially all parts of the ventricles simultaneously and causing them all to become refractory. All action potentials stop, and the heart remains quiescent for 3 to 5 seconds, after which it begins to beat again, usually with the sinus node or some other part of the heart becoming the pacemaker. However, the same re-entrant focus that had originally thrown the ventricles into fib-rillation often is still present, in which case fibrillation may begin again immediately. 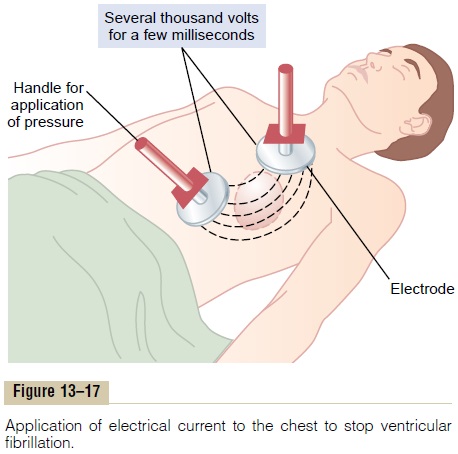 When electrodes are applied directly to the two sides of the heart, fibrillation can usually be stopped using 110 volts of 60-cycle alternating current applied for 0.1 second or 1000 volts of direct current applied for a few thousandths of a second. When applied through two electrodes on the chest wall, as shown in Figure 13–17, the usual procedure is to charge a large electrical capacitor up to several thousand volts and then to cause the capacitor to discharge for a few thousandths of a second through the electrodes and through the heart. In our laboratory, the heart of a single anesthetized dog was defibrillated 130 times through the chest wall, and the animal lived thereafter in perfectly normal condition.

A technique for pumping the heart without opening the chest consists of intermittent thrusts of pressure on the chest wall along with artificial respiration. This, plus defibrillation, is called cardiopulmonary resuscitation, or CPR.