A premature contraction is a contraction of the heart before the time that normal contraction would have been expected. This condition is also called extrasystole,premature beat, or ectopic beat.

A premature contraction is a contraction of the heart before the time that normal contraction would have been expected. This condition is also called extrasystole,premature beat, or ectopic beat.

Causes of Premature Contractions. Most premature con-tractions result from ectopic foci in the heart, which emit abnormal impulses at odd times during the cardiac rhythm.

Possible causes of ectopic foci are (1) local areas of ischemia; (2) small calcified plaques at differ-ent points in the heart, which press against the adjacent cardiac muscle so that some of the fibers are irritated; and (3) toxic irritation of the A-V node, Purkinje system, or myocardium caused by drugs, nicotine, or caf-feine. Mechanical initiation of premature contractions is also frequent during cardiac catheterization; large numbers of premature contractions often occur when the catheter enters the right ventricle and presses against the endocardium.

Figure 13–9 shows a single premature atrial contraction. The P wave of this beat occurred too soon in the heart cycle; the P-R interval is shortened, indicating that the ectopic origin of the beat is in the atria near the A-V node. Also, the interval between the premature con-traction and the next succeeding contraction is slightly prolonged, which is called a compensatory pause. One of the reasons for this is that the premature contraction originated in the atrium some distance from the sinus node, and the impulse had to travel through a consid-erable amount of atrial muscle before it discharged the sinus node. Consequently, the sinus node discharged late in the premature cycle, and this made the succeeding sinus node discharge also late in appearing. 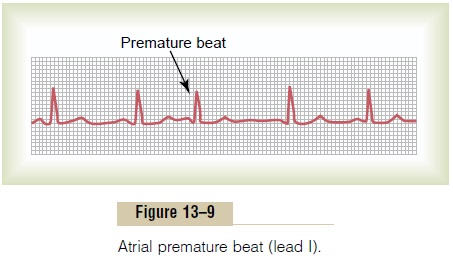 Premature atrial contractions occur frequently in otherwise healthy people. Indeed, they often occur in athletes whose hearts are in very healthy condition. Mild toxic conditions resulting from such factors as smoking, lack of sleep, ingestion of too much coffee, alcoholism, and use of various drugs can also initiate such contractions.

Pulse Deficit. When the heart contracts ahead of sched-ule, the ventricles will not have filled with blood nor-mally, and the stroke volume output during that contraction is depressed or almost absent. Therefore, the pulse wave passing to the peripheral arteries after a premature contraction may be so weak that it cannot be felt in the radial artery. Thus, a deficit in the number of radial pulses occurs when compared with the actual number of contractions of the heart.

Figure 13–10 shows a premature contraction that originated in the A-V node or in the A-V bundle. The P wave is missing from the electrocardiographic record 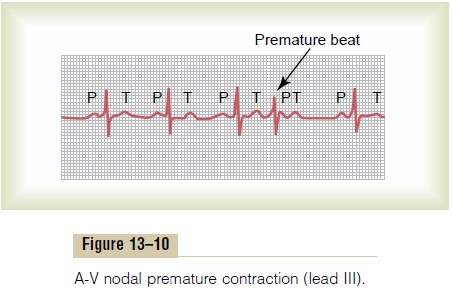 1.       The QRS complex is usually considerably prolonged. The reason is that the impulse is conducted mainly through slowly conducting muscle of the ventricles rather than through the Purkinje system.

2.       The QRS complex has a high voltage for the following reasons: when the normal impulse passes through the heart, it passes through both ventricles nearly simultaneously; consequently, in the normal heart, the depolarization waves of the two sides of the heart—mainly of opposite polarity to each other—partially neutralize each other in the electrocardiogram. When a PVC occurs, the impulse almost always travels in only one direction, so that there is no such neutralization effect, and one entire side or end of the ventricles is depolarized ahead of the other; this causes large electrical potentials, as shown for the PVCs in Figure 13–11. 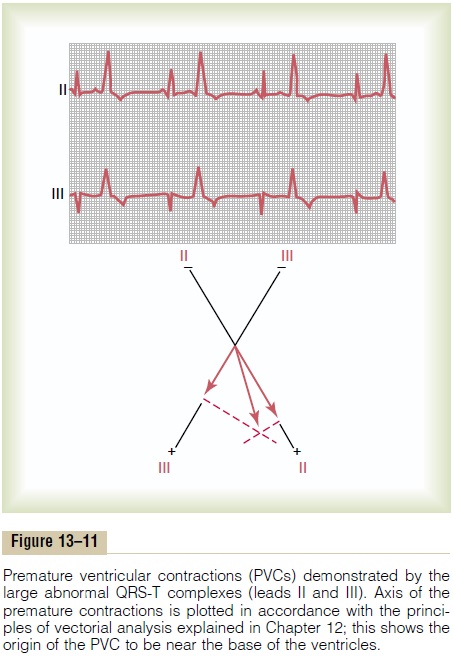