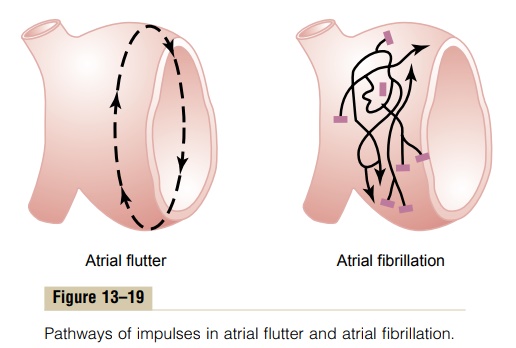 Remember that except for the conducting pathway through the A-V bundle, the atrial muscle mass is separated from the ventricular muscle mass by fibrous tissue. 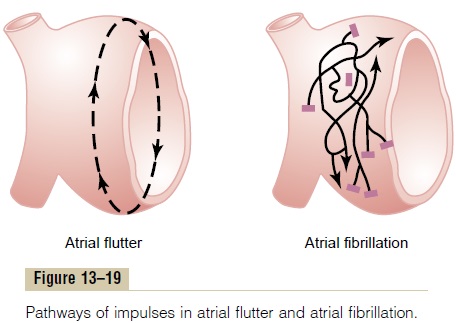 Pumping Characteristics of the Atria During Atrial Fibrillation.

Electrocar diogram in Atrial Fibrillation. Figure 13–18 showsthe electrocardiogram during atrial fibrillation. Numer-ous small depolarization waves spread in all directions through the atria during atrial fibrillation. Because the waves are weak and many of them are of opposite polarity at any given time, they usually almost com-pletely electrically neutralize one another. Therefore, in the electrocardiogram, one can see either no P waves from the atria or only a fine, high-frequency, very low voltage wavy record. Conversely, the QRS-T complexes are normal unless there is some pathology of the ven-tricles, but their timing is irregular, as explained next. 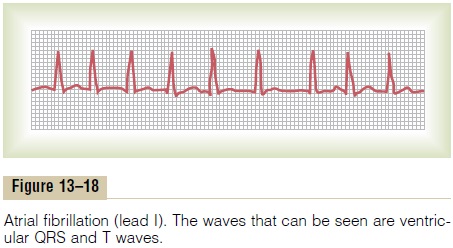 When the atria are fibrillating, impulses arrive from the atrial muscle at the A-V node rapidly but also irregu-larly. Because the A-V node will not pass a second impulse for about 0.35 second after a previous one, at least 0.35 second must elapse between one ventricular contraction and the next.

Then an additional but variable interval of 0 to 0.6 second occurs before one of the irregular atrial fibrillatory impulses happens to arrive at the A-V node. Thus, the interval between suc-cessive ventricular contractions varies from a minimum of about 0.35 second to a maximum of about 0.95 second, causing a very irregular heartbeat. In fact, this irregularity, demonstrated by the variable spacing of the heartbeats in the electrocardiogram of Figure 13–18, is one of the clinical findings used to diagnose the condi-tion. Also, because of the rapid rate of the fibrillatory impulses in the atria, the ventricle is driven at a fast heart rate, usually between 125 and 150 beats per minute.

Electroshock Treatment of Atrial Fibrillation. In the samemanner that ventricular fibrillation can be converted back to a normal rhythm by electroshock, so too can atrial fibrillation be converted by electroshock. The pro-cedure is essentially the same as for ventricular fibrilla-tion conversion—passage of a single strong electric shock through the heart, which throws the entire heart into refractoriness for a few seconds; a normal rhythm often follows if the heart is capable of this.