Home | | Medical Physiology | Abnormal Rhythms That Result from Block of Heart Signals Within the Intracardiac Conduction Pathways
Posted On :  26.07.2017 07:13 pm

In rare instances, the impulse from the sinus node is blocked before it enters the atrial muscle.

In rare instances, the impulse from the sinus node is blocked before it enters the atrial muscle. This phe-nomenon is demonstrated in Figure 13–4, which shows sudden cessation of P waves, with resultant standstill of the atria. However, the ventricles pick up a new rhythm, the impulse usually originating spontaneously in the atrioventricular (A-V) node, so that the rate of the ven-tricular QRS-T complex is slowed but not otherwise altered. 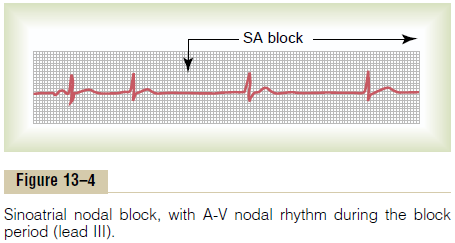 The only means by which impulses ordinarily can pass from the atria into the ventricles is through the A-Vbundle, also known as the bundle of His. Conditions thatcan either decrease the rate of impulse conduction in this bundle or block the impulse entirely are as follows:

2.       Compression of the A-V bundle by scar tissue or bycalcified portions of the heart can depress or block conduction from the atria to the ventricles.

3.     Inflammation of the A-V node or A-V bundle can depress conductivity from the atria to the ventricles. Inflammation results frequently from different types of myocarditis, caused, for example, by diphtheria or rheumatic fever.

4.     Extreme stimulation of the heart by the vagus nerves in rare instances blocks impulse conduction through the A-V node. Such vagal excitation occasionally results from strong stimulation of the baroreceptors in people with carotid sinussyndrome, discussed earlier in relation tobradycardia.

Prolonged P-R (or P-Q) Interval—First Degree Block. The usuallapse of time between beginning of the P wave and beginningof the QRS complex is about 0.16 secondwhen the heart is beating at a normal rate. This so-called P-R interval usually decreases in length with faster heartbeat and increases with slower heartbeat. In general, when the P-R interval increases to greater than 0.20 second, the P-R interval is said to be prolonged, and the patient is said to have first degree incomplete heartblock.

Figure 13–5 shows an electrocardiogram with pro-longed P-R interval; the interval in this instance is about 0.30 second instead of the normal 0.20 or less. Thus, first degree block is defined as a delay of conduction from the atria to the ventricles but not actual blockage of con-duction. The P-R interval seldom increases above 0.35 to 0.45 second because, by that time, conduction through the A-V bundle is depressed so much that conduction stops entirely. One means for determining the severity of some heart diseases—acute rheumatic heart disease, for instance—is to measure the P-R interval. 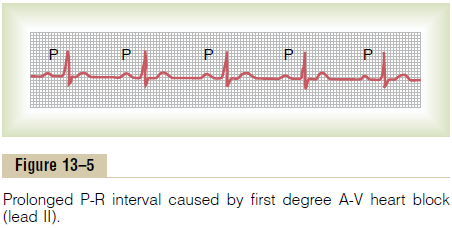 Second Degree Block. When conduction through the A-Vbundle is slowed enough to increase the P-R interval to 0.25 to 0.45 second, the action potential sometimes is strong enough to pass through the bundle into the ven-tricles and sometimes is not strong enough. In this instance, there will be an atrial P wave but no QRS-T wave, and it is said that there are “dropped beats” of the ventricles. This condition is called second degree heartblock.

Figure 13–6 shows P-R intervals of 0.30 second, as well as one dropped ventricular beat as a result of failure of conduction from the atria to the ventricles. 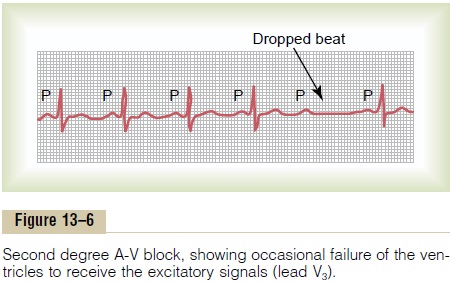 Complete A-V Block (Third Degree Block). When the condi-tion causing poor conduction in the A-V node or A-V bundle becomes severe, complete block of the impulse from the atria into the ventricles occurs.

In this instance, the ventricles spontaneously establish their own signal, usually originating in the A-V node or A-V bundle. Therefore, the P waves become dissociated from the QRS-T complexes, as shown in Figure 13–7. Note that the rate of rhythm of the atria in this electrocardiogram is about 100 beats per minute, whereas the rate of ven-tricular beat is less than 40 per minute. Furthermore,there is no relation between the rhythm of the P waves and that of the QRS-T complexes because the ventri-cles have “escaped” from control by the atria, and they are beating at their own natural rate, controlled most often by rhythmical signals generated in the A-V node or A-V bundle.

Stokes-Adams Syndrome—Ventricular Escape. In somepatients with A-V block, the total block comes and goes; that is, impulses are conducted from the atria into the ventricles for a period of time and then suddenly impulses are not conducted. The duration of block may be a few seconds, a few minutes, a few hours, or even weeks or longer before conduction returns. This condi-tion occurs in hearts with borderline ischemia of the conductive system.

Each time A-V conduction ceases, the ventricles often do not start their own beating until after a delay of 5 to 30 seconds. This results from the phenomenon called overdrive suppression. This means that ventricularexcitability is at first in a suppressed state because the ventricles have been driven by the atria at a rate greater than their natural rate of rhythm. However, after a few seconds, some part of the Purkinje system beyond the block, usually in the distal part of the A-V node beyond the blocked point in the node, or in the A-V bundle, begins discharging rhythmically at a rate of 15 to 40 times per minute and acting as the pacemaker of the ventricles. This is called ventricular escape.

Because the brain cannot remain active for more than 4 to 7 seconds without blood supply, most patients faint a few seconds after complete block occurs because the heart does not pump any blood for 5 to 30 seconds, until the ventricles “escape.” After escape, however, the slowly beating ventricles usually pump enough blood to allow rapid recovery from the faint and then to sustain the person. These periodic fainting spells are known as the Stokes-Adams syndrome.

Occasionally the interval of ventricular standstill at the onset of complete block is so long that it becomes detrimental to the patient’s health or even causes death. Consequently, most of these patients are provided with an artificial pacemaker,a small battery-operated electrical stimulator planted beneath the skin, with electrodes usually connected to the right ventricle. The pacemaker provides continued rhythmical impulses that take control of the ventricles.

Most of the same factors that can cause A-V block can also block impulse conduction in the peripheral ven-tricular Purkinje system. Figure 13–8 shows the condition known as electrical alternans, which results from partial intraventricular block every other heartbeat. This electrocardiogram also shows tachycardia (rapid heart rate), which is probably the reason the block has occurred, because when the rate of the heart is rapid, it may be impossible for some portions of the Purkinje system to recover from the previous refractory period quickly enough to respond during every succeeding heartbeat. Also, many conditions that depress the heart, such as ischemia, myocarditis, or digitalis toxicity, can cause incomplete intraventricular block, resulting in electrical alternans. 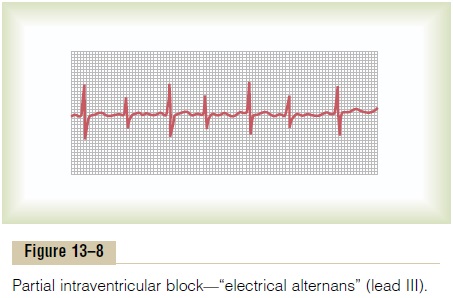