Some abnormalities in different portions of the heart, including the atria, the Purkinje system, or the ventri-cles, can occasionally cause rapid rhythmical discharge of impulses that spread in all directions throughout the heart.

Some abnormalities in different portions of the heart, including the atria, the Purkinje system, or the ventri-cles, can occasionally cause rapid rhythmical discharge of impulses that spread in all directions throughout the heart. This is believed to be caused most frequently by re-entrant circus movement feedback pathways that set up local repeated self–re-excitation. Because of the rapid rhythm in the irritable focus, this focus becomes the pacemaker of the heart.

The term “paroxysmal” means that the heart rate becomes rapid in paroxysms, with the paroxysm beginning suddenly and lasting for a few seconds, a few minutes, a few hours, or much longer. Then the paroxysm usually ends as suddenly as it began, with the pacemaker of the heart instantly shifting back to the sinus node.

Paroxysmal tachycardia often can be stopped by elic-iting a vagal reflex. A type of vagal reflex sometimes elicited for this purpose is to press on the neck in the regions of the carotid sinuses, which may cause enough of a vagal reflex to stop the paroxysm. Various drugs may also be used. Two drugs frequently used are quini-dine and lidocaine, either of which depresses the normal increase in sodium permeability of the cardiac muscle membrane during generation of the action potential, thereby often blocking the rhythmical discharge of the focal point that is causing the paroxysmal attack.

Figure 13–12 demonstrates in the middle of the record a sudden increase in the heart rate from about 95 to about 150 beats per minute. On close study of the elec-trocardiogram during the rapid heartbeat, an inverted P wave is seen before each QRS-T complex, and this P wave is partially superimposed onto the normal T wave of the preceding beat. This indicates that the origin of this paroxysmal tachycardia is in the atrium, but because the P wave is abnormal in shape, the origin is not near the sinus node.

Atrial or A-V nodal paroxysmal tachycardia, both of which are called supraventricular tachycardias, usually occurs in young, otherwise healthy people, and they gen-erally grow out of the predisposition to tachycardia after adolescence. In general, supraventricular tachy-cardia frightens a person tremendously and may cause weakness during the paroxysm, but only seldom does permanent harm come from the attack.

Figure 13–13 shows a typical short paroxysm of ven-tricular tachycardia. The electrocardiogram of ventricular paroxysmal tachycardia has the appearance of a series of ventricular premature beats occurring one after another without any normal beats interspersed. 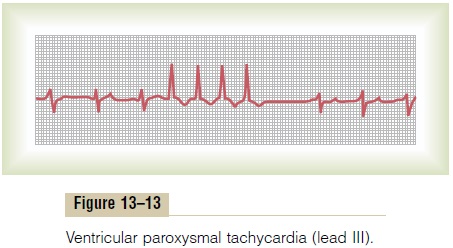 Ventricular paroxysmal tachycardia is usually a serious condition for two reasons. First, this type of tachycardia usually does not occur unless considerable ischemic damage is present in the ventricles. Second, ventricular tachycardia frequently initiates the lethalcondition of ventricular fibrillation because of rapidrepeated stimulation of the ventricular muscle, as we discuss in the next section.

Sometimes intoxication from the heart treatment drug digitalis causes irritable foci that lead to ventricu-lar tachycardia. Conversely, quinidine, which increases the refractory period and threshold for excitation of cardiac muscle, may be used to block irritable foci causing ventricular tachycardia.