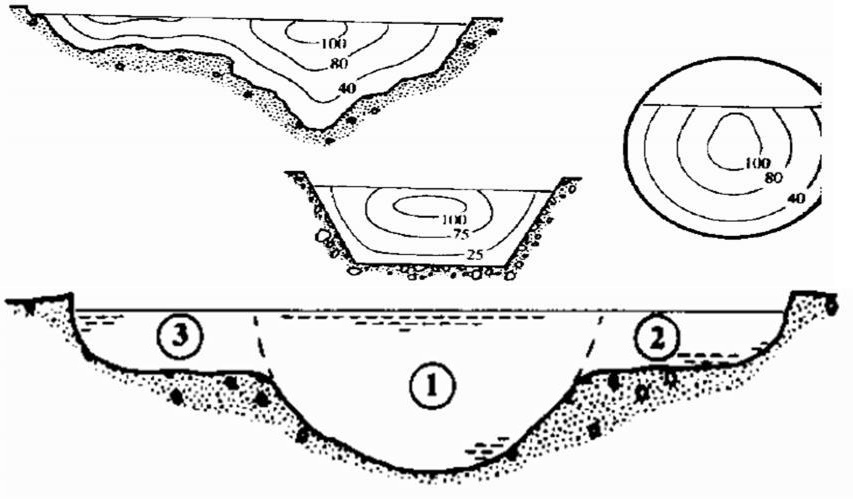 The measured velocity in an open channel will always vary across the channel section because of friction along the boundary.

The measured velocity in an open channel will always vary across the channel section because of friction along the boundary. Neither is this velocity distribution usually axisymmetric (as it is in pipe flow) due to the existence of the free surface. It might be expected to find the maximum velocity at the free surface where the shear force is zero but this is not the case. The maximum velocity is usually found just below the surface.

The explanation for this is the presence of secondary currents which are circulating from the boundaries towards the section centre and resistance at the air/water interface. These have been found in both laboratory measurements and 3d numerical simulation of turbulence.

The figure below shows some typical velocity distributions across some channel cross sections. The number indicates percentage of maximum velocity.

Determination of energy and momentum coefficients

To determine the values of a and ß the velocity distribution must have been measured (or be known in some way). In irregular channels where the flow may be divided into distinct regions a may exceed 2 and should be included in the Bernoulli equation.

The figure below is a typical example of this situation. The channel may be of this shape when a river is in flood - this is known as a compound channel .

If the channel is divided as shown into three regions and making the assumption that ? = 1 for each then