We can use Manning's formula for discharge to calculate steady uniform flow. Two calculations are usually performed to solve uniform flow problems. 1. Discharge from a given depth 2. Depth for a given discharge

We can use Manning's formula for discharge to calculate steady uniform flow. Two calculations are usually performed to solve uniform flow problems.

1.  Discharge from a given depth

2.  Depth for a given discharge

In steady uniform flow the flow depth is know as normal depth.

As we have already mentioned, and by definition, uniform flow can only occur in channels of constant cross-section (prismatic channels) so natural channel can be excluded. However we will need to use Manning's equation for gradually varied flow in natural channels - so application to natural/irregular channels will often be required.

Uniform flow Problem 1 - Discharge from depth in a trapezoidal channel

A concrete lined trapezoidal channel with uniform flow has a normal depth is 2m. The base width is 5m and the side slopes are equal at 1:2

What are: a) Discharge (Q) b) Mean velocity (V) c) Reynolds number (Re) Calculate the section properties 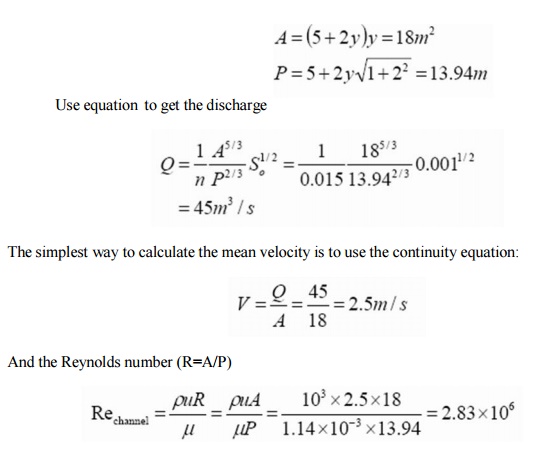 This is very large - i.e. well into the turbulent zone - the application of the Manning's equation was therefore valid.

What solution would we have obtained if we had used the Colebrook-White equation?

Probably very similar as we are well into the rough-turbulent zone where both equations are truly applicable.

Uniform flow Problem 2 - Depth from Discharge in a trapezoidal channel

Using the same channel as above, if the discharge is know to be 30m3 /s in uniform flow, what is the normal depth? 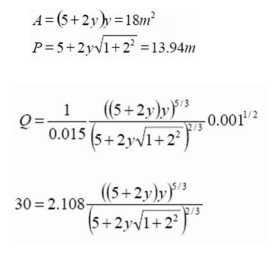 We need to calculate y from this equation.

Even for this quite simple geometry the equation we need to solve for normal depth is complex. One simple strategy to solve this is to select some appropriate values of y and calculate the right hand side of this equation and compare it to Q (=30) in the left. When it equals Q we have the correct y .

Even though there will be several solutions to this equation, this strategy generally works because we have a good idea of what the depth should be (e.g. it will always be positive and often in the

We might also use the bisector method to solve this.

If the channel in the above example were to be designed for flooding it may have a section like this:

When the flow goes over the top of the trapezoidal channel it moves to the "flood plains" so the section allows for a lot more discharge to be carried.

First split the section as shown in to three regions (this is arbitrary - left to the engineers judgement). Then apply Manning's formula for each section to give three discharge values and the total discharge will be Q = Q1 + Q2 + Q 3 .

Calculate the properties of each region:

This is a  very high  value of a and a clear case of where a velocity coefficient should be used.

Not that this method doe not give completely accurate relationship between stage and discharge because some of the assumptions are not accurate. E.g. the arbitrarily splitting in to regions of fixed Manning n is probably not what is occurring in the actual channel. However it will give an acceptable estimate as long as care is taken in choosing these regions.