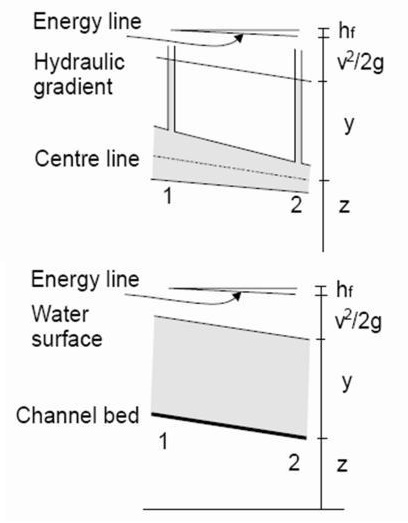 The two kinds of flow are compared in the figure above. On the left is pipe flow. Two piezometers are placed in the pipe at sections 1 and 2. The water levels in the pipes are maintained by the pressure in the pipe at elevations represented by the hydraulics grade line or hydraulic gradient .

The pressure exerted by the water in each section of the pipe is shown in the tube by the height y of a column of water above the centre line of the pipe.

The total energy of the flow of the section (with reference to a datum) is the sum of the elevation z of the pipe centre line, the piezometric head y and the velocity head V /2g , where V is the mean velocity. The energy is represented in the figure by what is known as the energy grade line or the energy gradient .

The loss of energy that results when water flows from section 1 to section 2 is represented by hf.

A similar diagram for open channel flow is shown to the right. This is simplified by assuming parallel flow with a uniform velocity distribution and that the slope of the channel is small. In this case the hydraulic gradient is the water surface as the depth of water corresponds to the piezometric height.

Despite the similarity between the two kinds of flow, it is much more difficult to solve

Physical conditions in open-channels vary much more than in pipes - the cross-section of pipes is usually round - but for open channel it can be any shape.

Open channel flows are found in large and small scale. For example the flow depth can vary between a few cm in water treatment plants and over 10m in large rivers. The mean velocity of flow may range from less than 0.01 m/s in tranquil waters to above 50 m/s in high-head spillways. The range of total discharges may extend from 0.001 l/s in chemical plants to greater than 10000 m 3 /s in large rivers or spillways.

In each case the flow situation is characterised by the fact that there is a free surface whose position is NOT known beforehand - it is determined by applying momentum and continuity principles.

Open channel flow is driven by gravity rather than by pressure work as in pipes.