Primary structure: The tip of a root is protected by a root cap behind which is a meristem and elongation zone. Nutrient and water uptake occurs through root hairs, formed as protrusions of epidermal cells in the maturation zone.

The tip of a root is protected by a root cap behind which is a meristem and elongation zone. Nutrient and water uptake occurs through root hairs, formed as protrusions of epidermal cells in the maturation zone. The vascular cylinder becomes mature in this zone, with a water impermeable endodermis and functional phloem and xylem.

The root cap is a cone of cells which protects the meristem and secretes mucilage. Root cap cells are constantly sloughed off. The mucilage provides an environment for bacteria and fungi which live in the rhizosphere, the immediate environment of the root.

Root hairs are outgrowths of epidermal cells giving a high surface area of contact with the soil for water and mineral nutrient uptake. They are short-lived and the mature regions of the root are hair-less.

The primary root persists as a taproot and lateral roots arise from it in many plants, though in monocots it dies and adventitious roots grow from the stem. These give rise to a mass of fine, fibrous roots, all of similar size. Root architecture is responsive to soil depth, water availability and nutrients.

Roots extract water and minerals from soil. They penetrate the soil, growing by elongation near the tip. As soil is a resistant medium, the growing tip has a near conical protective root cap (Fig. 1) which lubricates the root surface as it is pushed by cell expansion between soil particles. Growth occurs when new cells, formed in meristems in the zone of cell division elongate in the elongation zone (Fig. 1). This elongation is driven by hydrostatic pressure within the cell (Topic I1) that propels the root tip deeper into the soil. The elongation zone is effectively cylindrical, allowing growth in the soil. Behind it, in the maturation zone, root hairs develop which provide large areas of contact with the water and nutrient films surrounding soil particles and anchor the older parts of the root. 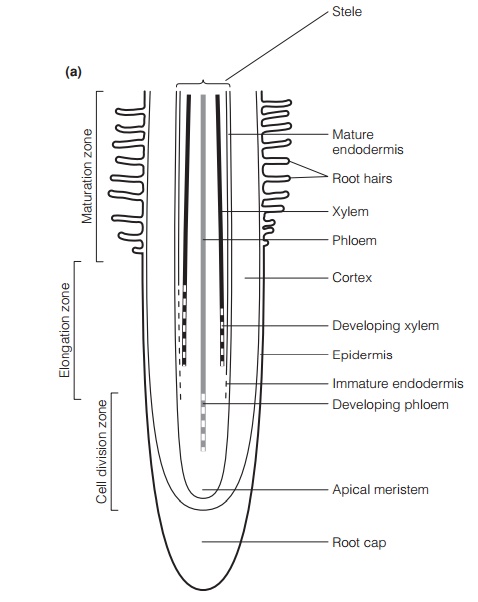 Internally, the ground tissue of the root is the cortex, made up of large, vacuolated cells which fill the space between the epidermis and vascular cylinder (stele). While all the cells in the root can be traced back to their origins in the root meristems (see below), many of the key tissues of the root cannot be observed until they form in the maturation zone (Fig. 1). The vascular bundle (stele) contains phloem (which develops first) and xylem surrounded by a cylinder of cells with water-resistant cell walls, the endodermis (Topic I4). Endodermal cells possess a characteristic thickening of the anticlinal cell walls (radial and transverse walls, which are perpendicular to the root surface). This wall thickening, the Casparianstrip, is impregnated with a water-impermeable substance, suberin.

Immature xylem and endodermis can be observed below the area where root hairs form (Fig. 1). Later, above the root hair zone, lateral roots may form. These originate in the cells near the vascular tissue and force their way out through the cortex and epidermis. Each lateral root has a meristem and its vascular tissue interconnects with that of the primary root.

The meristem lies behind the root cap and comprises small, thin-walled cells with prominent nuclei and no large vacuole (Topic C1). Two types of root have been suggested. In closed roots (for instance in corn [maize]; Fig. 2a), three layers of cells (initials) can be identified in a single region in theapicalmeristem, which form all the tissues of the root. In the second type, open roots (for instance onion; Fig. 2b), there appear to be three meristems which separately form the tissues of the root. 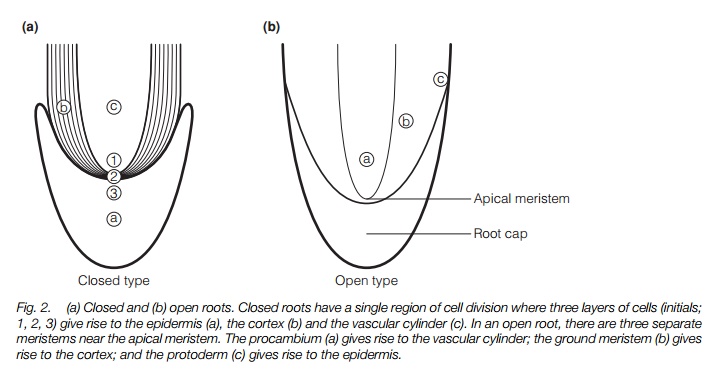 The root cap is a conical collection of parenchyma cells, which in some plants is large and conspicuous and in others small. It protects the root tip as it is forced through the soil and secretes mucilage as lubricant made in the Golgi apparatus of slime-secreting cells. Root cap cells have a short life (up to 1 week, depending on species) and are constantly sloughed off and may remain alive in the mucilage for some time. The mucilage provides an environment for bacteria and fungi which live in the rhizosphere, the immediate environment of the root.

Root hairs are single cell structures formed as outgrowths of epidermal cells (Fig. 3). They form a root hair zone that gives a very high surface area of contact with the soil. While root hairs are normally only 0.1–1.0 cm long, they can be extremely numerous, with more than 20 000 hairs cm–2 of root and billions per plant, giving a vast surface area for absorption. Root hairs are also short-lived and the mature regions of the root are hair-less. The root hair zone is therefore extremely important for water and mineral nutrient uptake, though in plantswith mycorrhizal fungi (Topic M1) associated with the root, root hairs may be much less important or absent. 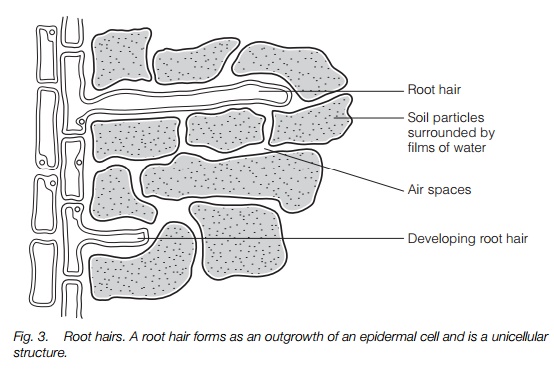 All plants first form a primary root and in most plants, including the gymnosperms, primitive dicotyledons and eudicotyledons this persists as ataproot. The lateral roots arise from it at various points (Fig. 4a). In the monocotyledons the primary root dies and adventitious roots are formed which grow out of the stem. These give rise to a mass of fine, fibrous roots, all of similar size and prominence (Fig. 4b). Root architecture always follows one of these basic plans, but is also responsive to soil depth, water availability and nutrients. 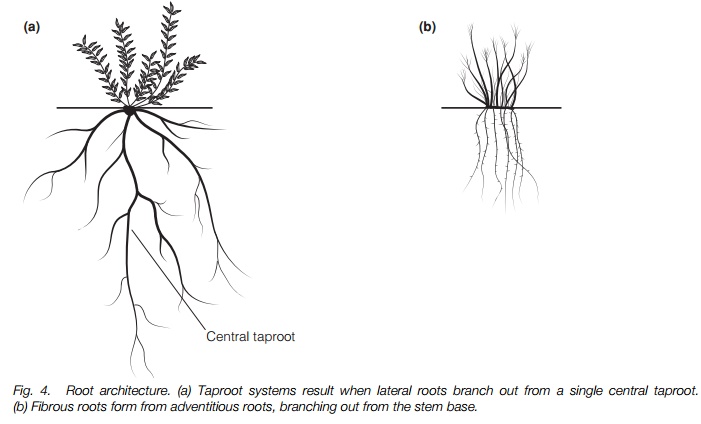