Increase in diameter results from the action of the vascular cambium and the cork cambium. The vascular cambium lies between the primary phloem and xylem and divides to form phloem on the outside and xylem on the inside. The cork cambium lies within the stem cortex and generates cells filled with suberin. Gas exchange occurs through lenticels where stomata once were.

The center of a tree trunk contains heartwood, where the vascular system no longer functions. Around it lies the sapwood that contains functional phloem and xylem. Vascular rays of long-lived parenchyma cells radiate across the trunk, conducting nutrients and water. Bark is made up of the outermost layers of the trunk, including cork and outer phloem cells.

Many species of plant complete their life cycle using only the primary tissues generated by primary meristems. These are the herbaceous species described in Topic C3. In many other species, production of primary tissue and elongation growth are followed by the deposition of secondary tissue. These tissues give increases in diameter and the tissues formed are strengthened in comparison to primary tissues by deposition of extensive secondary walls and lignin, a polymeric phenolic compound, in the cell wall making them woody. Plants showing secondary growth usually live for many years, the wood making them resistant to damage by herbivores and weather. Monocots do not normally generate secondary tissues, but some, like palm trees, undergo additional primary growth to form thick stems. Some palms also continue cell division in older parenchyma tissue to give what is known as diffuse secondary growth.

Increase in diameter results from the action of two secondary meristems, the vascular cambium and the cork cambium. The vascular cambium is a narrow band of cells between the primary phloem and xylem (Fig. 1), which remains a meristem. This tissue goes on dividing indefinitely with active growth in spring and early summer in temperate trees, with the new cells being formed to the

outside of the cambium to form phloem and the inside to form xylem (Fig. 2). The newly formed secondary phloem and xylem function like the primary vascular tissue in transport. As xylem cells are deposited on the inner face, the vascular cambium moves outwards. In temperate regions early in the growing season, the cambium produces xylem cells of large diameter and these get progressively smaller as the season progresses. In consequence, growth appears as more and less dense bands of cells, the familiar annual rings observed in cross section of a tree trunk. Some tropical species on the other hand, such as ebony, produce xylem consistently throughout the growing season and their wood is of a consistent appearance without annual rings, though many species of the seasonal tropics have annual cycles similar to those of temperate trees.

The cork cambium arises within the stem cortex and generates cuboid cells that quickly become filled with the waxy substance suberin (also found as water-proofing in the root endodermis; Topic I1). Suberinized cells die, but the dead cells remain as a protective layer (Fig. 3), required because the original epidermis can no longer function. Cork tissue forms part of the bark of the tree (the remainder being secondary phloem) and replaces the epidermis. Its characterand thickness varies from species to species. Some gas exchange to thestem occurs through lenticels, pores remaining through the bark.

If a transverse section of a tree trunk is studied (Fig. 3), a number of features appear. Concentric circles of annual growth rings are evident in most trees from seasonally varying environments. The center of the trunk of many species is the heartwood, where the vascular system no longer functions. It provides structural support and is often darker and impregnated with tannins (Topic J5), but may be completely removed without killing the tree. Around the heartwood lies the sapwood that contains functional phloem and xylem. Vascular rays radiate from the center of the trunk. These are formed of long lived parenchyma cells which conduct nutrients and water across the trunk, crossing both phloem and xylem, and are responsible for secretions into the heartwood. 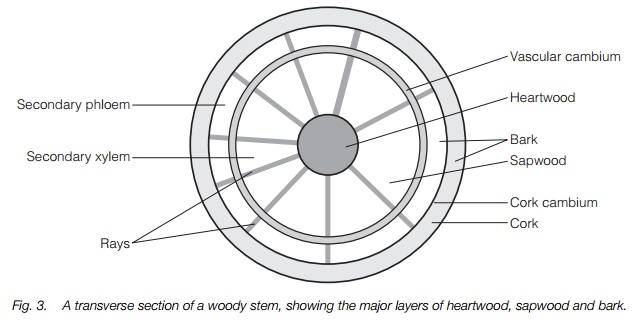 The outermost layers of the trunk are known as bark. Bark includes the corky tissues produced by the cork cambium and the underlying layers outside thevascular cambium, including the secondary phloem.