Leaves are the main photosynthetic organs of plants. The leaf blade lamina generally has a large surface area to maximize light capture and may have a petiole.

Leaves are the main photosynthetic organs of plants. The leaf blade lamina generally has a large surface area to maximize light capture and may have a petiole. Compound leaves have a lamina divided into leaflets and a central rachis. The lamina may be much reduced (e.g. in conifer needles). The vascular tissue of the leaf occurs as veins, which are branched from a central midrib forming a network, or are parallel to one another.

A typical dicot leaf has upper and lower surfaces protected by the epidermis with a waxy cuticle and may have leaf hairs. The photosynthetic cells are the palisade and spongy mesophyll. Both cell types are surrounded by gas spaces. Carbon dioxide enters these by way of stomatal pores in the epidermis connecting with the gas spaces of the mesophyll. Transport to and from the leaf occurs in veins which contain xylem and phloem.

Other types of leaf

Some species show Krantz anatomy in which the mesophyll surrounds bundle sheath cells around the vascular bundle in a ring. Leaves adapted to drought may be thickened and fleshy with a low surface area. Conifer

needles have a small surface area, sunken stomata, a hypodermis beneath the epidermis and an endodermis surrounding the vascular tissue.

The major photosynthetic organ of most plants is the foliage leaf (Fig. 1). This is mainly made up of cells containing chloroplasts. They are generally flat and thin with a lamina of large surface area attached to the plant by a stalk or petiole. The structure is arranged so that both the leaf lamina and the chloropasts can be orientated to the sunlight. The lamina is commonly thin so that light does not have to penetrate far (losing energy) before it impinges on a chloroplast. However, such large, flat surfaces are easily desiccated or damaged and a variety of leaf adaptations exists. 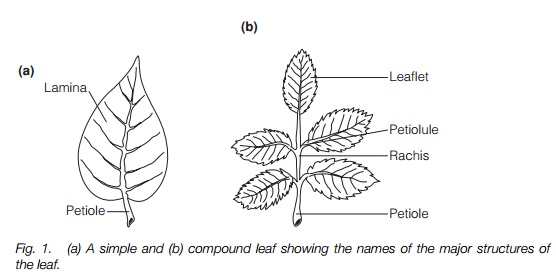 Leaves with a stalk or petiole are petiolate. A lamina without a petiole is a sessile leaf. Some monocotyledons, such as the grasses, have a long narrow leaf blade without a petiole, the base of which forms a sheath around the stem. In some species, the lamina is divided into smaller leaflets, forming acompound leaf. In these, the petiole is extended to form a rachis, with leaflets (Fig. 2). The vascular tissue of the leaf appears as veins, which give strength and rigidity. Most dicots and some monocots have a prominent central midrib and a network of veins around this; others have several parallel veins. In conifers, the leaf is reduced to a needle or scale with a single vascular strand and much reduced surface area. 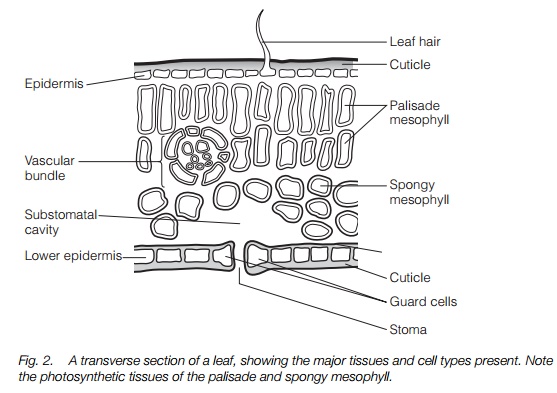 A dicotyledonous leaf, like that of the bean or pea, is shown in Fig. 2. The upper and lower surfaces are protected by an epidermis of closely packed cells, coated with a waxy cuticle to minimize desiccation. Leaf hairs or trichomes may also project from the epidermis, which lessen air movement across the leaf (and therefore water loss). Beneath the epidermis lies the palisade mesophyll, normally one or two layers of elongated cells orientated perpendicular to the epidermis with many chloroplasts. Beneath this lies more photosynthetic tissue, the spongy mesophyll,

surrounded by many air spaces, beneath which lies the lower epidermis. Carbon dioxide required by the leaf enters the leaf gas spaces by way ofstomata (singular stoma), pores in the epidermis which are regulated by specialist epidermal cells called guard cells (Topic I2). The stomata lead to a cavity, the substomatal cavity, which connects with the gas spaces of the mesophyll.

Other types of leaf

Some species such as corn (maize; Zea mays L.) that show C4 photosynthesis (Topic J3), have a leaf structure in which a ring of bundle sheath cellssurrounds the vascular bundle with mesophyll cells radiating from it in a ring (Krantz [wreath] anatomy; Fig. 3). These leaves have one type of mesophyll cell surrounding the bundle sheath with gas spaces beneath the stomata. Some succulent species that are adapted to drought have highly thickened, fleshy leaves that store water, a low surface area and thick cuticle that minimizes water loss. Frequently they only open

their stomata at night (Topic J3). The needles of pines and other conifers have a small surface area, sunken stomata and a thick layer of protective tissue, the hypodermis just beneath the epidermis (Fig. 4), together with a protective layer (the endodermis) surrounding the vascular tissue. Other leaf adaptations to drought include having more stomata on the surface less exposed to desiccation and folds and tube-like structures that minimize air movement across leaf surfaces. 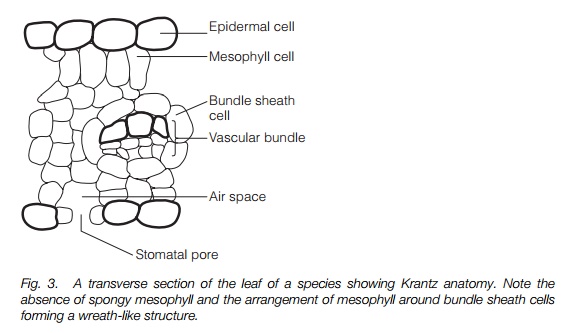 Leaves may be reduced to spines, as in cacti, or lost altogether in some plants in which the stem is the most important photosynthetic organ. A few other plants have outgrowths from the petiole or main stem that resemble leaves and act like them. The acacias of Australia, for instance, have flattened petioles but no lamina, while the butchers’ broom of Europe has no leaves, but flattened stem outgrowths that bear flowers. Modified leavesalso have a number of important roles in the plant, for instance as storage tissue in the fleshy scales of bulbs, as the protective scales of buds or astendrils, which give support to climbing plants.