In a typical flowering shoot there is a receptacle at the top of a stem with four whorls of floral organs: sepals, petals, stamens and carpels. Sepals are usually green and protective, petals often brightly colored and attractive to animals.

General structure of the flower

In a typical flowering shoot there is a receptacle at the top of a stem with four whorls of floral organs: sepals, petals, stamens and carpels. Sepals are usually green and protective, petals often brightly colored and attractive to animals. The stamens have a filament with the pollenbearing anthers on it. The carpel consists of an ovary enclosing the ovules, a style and a stigma with a receptive surface for pollen grains. In some plants one or more whorls may be absent, e.g. in unisexual flowers and reduced flowers of wind-pollinated plants.

Sepals resemble simple leaves. Petals have a specialized epidermis, often with pigmented vacuoles and air-filled reflective mesophyll. The pigments are mainly flavonoids with some betalains and carotenoids. Insects have different color sensitivity from us and the colors of petals are different and more varied for insects.

The filament bears four or two anthers. The anther wall has three layers and splits (dehisces) to release pollen. Some plants have specialized dehiscence such as only releasing pollen when insects vibrate their wings; orchids have sticky pollen masses known as pollinia. The filaments may be long and thin or flat and some are sensitive to insect contact.

The ovaries may be separate or fused, and on the surface, i.e. superior, or buried in the receptacle, inferior. There may or may not be a style. In animal-pollinated plants the stigma is club-shaped or lobed and may by dry or sticky; in wind-pollinated plants it is usually feathery with a large surface area. The ovaries contain one to many ovules. The ovules usually have two integuments and a nucellus surrounding the embryo sac, with a tiny gap, the micropyle, for pollen tube entry.

Nectar is mainly a sugar solution of varying concentration with small quantities of other substances. It is secreted at the base of the petals or elsewhere in the flower. Many flowers have no nectar and use pollen as a food reward, or more rarely oil or resin.

General structure of the flower

Flowers are unique to flowering plants, normally developing on vegetative shoots (Topic H1). A typical flower is hermaphrodite, i.e. bearing fertile organs of both sexes, and is pollinated by insects (Fig. 1). The stalk that bears the flower has a more or less swollen top just underneath the flower called the receptacle and on this there are four different organs borne in whorls: (from outside in)sepals, petals, stamens and carpels. Sepals normally surround the flower inbud, providing a protective function. The petals are usually the main organsattracting insects to flowers and many are brightly colored, though they may bephotosynthetic as well. There may be an indefinite number of petals and/or sepals, but many plants have a fixed number, often three or five.

The fertile parts of the flower are inside the petals (Fig. 1). They consist of the pollen-bearing male parts, stamens, in one or more whorls and the female carpels in the center. Stamens consist of a stalk, the filament, and an anther

enclosing the pollen grains. In some flowers there is an indefinitely large number of stamens, whereas in others the number corresponds to the number of petals or twice the number if there are two whorls. The carpels are usually fewer in number and consist of a basal ovary which contains the ovules, and above this a stalk, the style, which is topped by a stigma, the surface onto which pollen grains will land for fertilization. In most plants the stamens and carpels are of similar length and position in the open flower, but in many one sex matures before the other (Topic H2).

One or more of the whorls may not be present. Either sepals, petals or both may be absent, or the two whorls not fully differentiated. About 15% of the world’s plant species have unisexual flowers and these do not have one of the whorls of fertile organs, though many retain small infertile remnants of the other parts. If male flowers and female flowers occur on the same plant, the plant is known as monoecious; if they occur on separate plants it is known as dioecious. Wind-pollinated flowers are often very small without sepals or petals, many also being unisexual such as on catkin-bearing trees. These flowers may just have the fertile organs of one sex with bracts around them.

The sepals are the most leaf-like floral organ; they are often green and photosynthetic and, in structure, resemble a simple leaf. In some plants they resemble the petals. Petals resemble leaves in their overall organization but have a specialized epidermis and sub-epidermal layer. The epidermal cells frequently have small projections that absorb the incident light and scatter the light reflected from the mesophyll layer underneath. This layer has many air spaces between its cells and reflects all the light. The pigment is usually in the vacuoles of the epidermal cells but sometimes there is some in the mesophyll too.

There are three main types of pigment in petals. The most widespread are flavonoids, which include at least three types of anthocyanins (Fig. 2) responsible for the pink, purple and blue colors, and a number of similar anthoxanthins responsible for ivory-white and yellow colors which may be present in addition to the anthocyanins. Betalains, similar in structure to alkaloids (Topic J5), form intense purples and yellows in a few plant families, such as the cacti. Carotenoids occur in some yellow flowers such as daffodils and marigolds.

Most flower-visiting insects have good color vision but are sensitive to a different spectrum from us and other vertebrates, being insensitive to red but sensitive to the near ultraviolet (UV). Floral pigments of insect-pollinated

flowers are more varied within this color spectrum than within that of vertebrates, many flowers that are plain white to us absorbing in part of the UV spectrum, so an insect will see a range of shades. The lines towards the base of some petals, known as nectar guide marks, are exaggerated for insects since most absorb in the UV range giving a darker center to the flower for an insect.

Most plants have four anthers on each filament, some two (Fig. 3). The anthers have an outer epidermis, and inside that a fibrous layer forming the bulk of the wall, and an inner tapetum providing the nutrients for the developing pollen grains inside. When the anther is mature it dehisces, i.e. the wall splits to release the pollen. In most plants it splits all the way down along a line of weakness, but in some only the tip of the anther splits, and certain families have specialized dehiscence. In some plants, such as nightshades, the pollen is only released when a visiting bee vibrates its wings at a certain pitch (known as buzz-pollination). 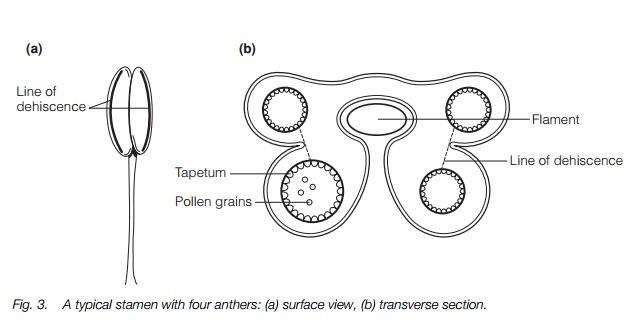 In the orchid family there is only one anther and this divides into two pollinia, sticky masses of thousands of pollen grains which are dispersed as a unit. The filaments vary, wind-pollinated flowers often having long flexible ones, and a few plants bearing wide filaments acting as the main attractive organs for insects. Some are sensitive to touch, contracting on contact with insects.

The ovaries are usually oblong shaped but some are spherical or disc-like and they may be separate or a few, often three or five, fused together. The ovaries may be situated on the surface of the flower, known as superior ovaries, or may be buried in the receptacle with only the style and stigma projecting, in which case they are known as inferior. There are intermediates.

A style may or may not be present, and, where the ovaries are fused, there is only one; it is up to several centimeters long in some bulbous plants. The style is usually solid with some central transmitting tissue through which the pollentubes will grow after the pollen grains have germinated on thestigma, but in some it is hollow and pollen tubes grow over the inner surface. The stigma in animal-pollinated plants is usually club-shaped, or with two-to-five lobes, sometimes one lobe per ovary. The surface may be dry or sticky (Topic H3). In windpollinated flowers the stigma is often lobed and feathery with a large surface area, frequently with no style.

Each ovary may have one ovule or several, up to a few thousand in the orchids. The ovules are usually attached to the side of the ovary nearest the center of the flower. They have a central embryo sac which includes the egg, surrounded by a nucellus of parenchyma cells and with usually two protective integuments around that. A few plant families have lost one or both integuments while others have four. There is a small opening in the integuments, the icropyle, through which the pollen tubes penetrate. The ovule is usually turned through 180° with the micropyle facing the stalk, known as anatropous, but a few species have upright ovules, ones turned to the side or even turned through 360° (Fig. 4).

Nectar is secreted by many flowers and is collected as a food by animal visitors. It is mainly a solution of glucose, fructose and sucrose in varying proportions depending in part on which are the main pollinators, the more specialist bee, butterfly or bird-pollinated flowers having high sucrose content. The concentration ranges from 15% sugar by weight to 80% or even crystalline sugar depending on flower form and weather conditions. It may also contain small quantities of amino acids and other substances that may be important nutrients for some pollinators such as flies. It is secreted in various different parts of a flower, most commonly at the base of the petals, or in a specialized spur at the base of a petal or petal tube in some flowers. In other flowers it is on the receptacle and some plants have special nectar-secreting organs, either modified petals or parts of petals. Honey is made from concentrated nectar (about 80% sugar) with pollen and other impurities.