Reproductive anatomy of the seed

The seed is the mature ovule and consists of a seed coat, endosperm and embryo. In angiosperms it is enclosed within a fruit.

The seed is the mature ovule and consists of a seed coat, endosperm and embryo. In angiosperms it is enclosed within a fruit.

Known as the testa, this is normally formed from one or both integuments. Frequently it is tough and survives unfavorable conditions; a few species have a fleshy outer integument.

This is normally triploid and the cells start dividing immediately after fertilization, sometimes forming an acellular mass first. It is the food store of the seed and may be rich in carbohydrate, protein or lipid. It remains as the main part of the seed at maturity in some plants.

After the first transverse cell division the upper cell forms the shoot, cotyledons and root, the lower cell a suspensor of no clear function. Most flowering plants have two cotyledons but some have one and grasses have an extra sheathing coleoptile. Some mature seeds, such as beans, are almost entirely filled with the embryo. On germination the cotyledons may remain in the seed and wither with shoot growth, or become the first leaves.

The ovule matures into a seed before it is dispersed from the parent plant. In flowering plants, the seeds are contained within fruits at maturity, although inother seed plants they are exposed. Flowering plant seeds consist of a seed coat, endosperm and the embryo. They are enormously variable in size, shape and structure, from coconuts weighing several kilograms to the microscopic seeds of orchids.

As the seed matures, the integuments of the ovule develop into the seed coat or testa. The structure of the testa is highly variable and it may be formed from one or both integuments and sometimes the nucellus as well (Topic D1). The testa hardens with the deposition of cutin or lignin and phenols and, in many plants, it is extremely resistant. Some can survive a passage through the gut of a vertebrate and a few, such as some eucalyptus seeds, can survive a fire; many can lie dormant (Topic H4). In some seeds the outer integument or part of it develops into a fleshy coat, or aril, attractive to animals, with a hard testa inside. Plants with dry indehiscent fruits may have almost no seed coat at all, its function being replaced by the fruit, as in grasses.

After the double fertilization of the ovule the first part to grow is the endosperm, normally consisting of triploid cells. Initially in many plants the endosperm nucleus divides freely giving an acellular tissue only later developing cell membranes and cell walls, although others are cellular from the start. Some remain part cellular part acellular, such as the coconut in which the milk is acellular. The endosperm grows rapidly and may absorb part of the nucellus or inner integument, stimulating their cells to break down. It incorporates within it a large supply of nutrients, a mixture of carbohydrate, lipid and protein and remains in the ripe seed of some plants which may be mainly starchy as in cereals such as wheat or oil-rich as in castor-oil, linseed or oilseed rape (canola). It also contains plant hormones which may stimulate the growth of the embryo (Topic H4). In some acellular endosperms, nuclei with high ploidy levels have been found where, it seems, the chromosomes have divided but never separated. In some plants the endosperm has been all or mostly absorbed by the embryo by the time the seed is mature, such as in beans and brazil nuts, both of which have protein-rich seeds.

The embryo starts to grow either shortly after fertilization or after some delay, up to a few months (Fig. 1). The first cell division is transverse, with just a few exceptions, giving a terminal and a basal cell. After this the details vary somewhat, but the terminal cell always gives rise to the stem apexand the cotyledons, which are the embryo’s first leaves and sometimes food store, and in some to the root apex and root cap as well. The basal cell provides the suspensor, along with the root tip and cap in some. The suspensor becomes a short string of cells and the lowest cell swells into a vesicle, but the function of the suspensor is not clear and it disintegrates with the enlargement of the embryo.

The earliest flowering plants almost certainly had two cotyledons, and in most living plants the shoot tip develops two lobes that will become the two cotyledons with the shoot apex between them. Beneath this, in the hypocotyl, vascular tissue develops. The developing root acquires a distinct cap. In some plants one of the cotyledons appears to be suppressed. This is a feature of one of the major divisions of the flowering plants, called themonocotyledons because of this (Topic R4), although some dicotyledons suppress one cotyledon in a similar way. Grasses, which are monocotyledons, have their own unique embryo formation with a swelling at the tip of the embryo forming two different outgrowths, the scutellumwhich may represent the cotyledon, and the coleoptile which grows beside it and forms a kind of sheath enclosing the shoot apex (Fig. 2). A similar sheath appears over the root apex. 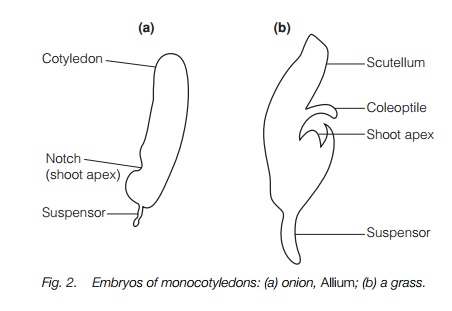 On germination, the cotyledons may remain in the seed and wither away as the nutrients pass to the developing shoot, known as hypogealgermination, or they may emerge as the first photosynthetic organs, known as epigeal (Fig. 3). They normally have a simple form, quite different from the typical foliage leaf and wither soon after the first foliage leaves have formed. In a few plants they persist. 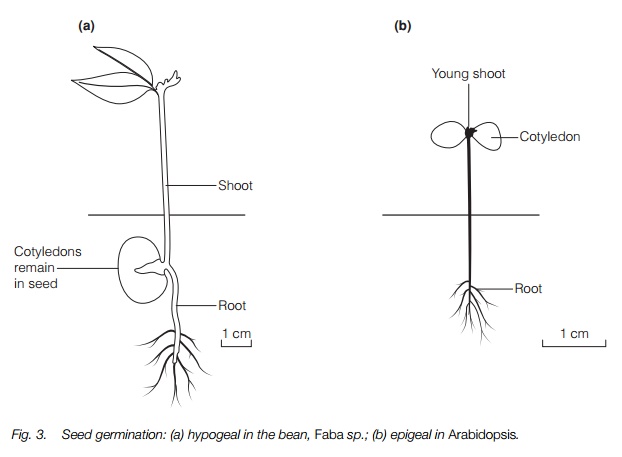