Reproductive anatomy of Pollen and ovules

Pollen grains consist of one haploid cell surrounded by an inner wall, intine, of cellulose and an outer wall, exine, of resistant sporopollenin. The nucleus divides to produce the pollen tube and two sperms.

The structure of pollen

Pollen grains consist of one haploid cell surrounded by an inner wall, intine, of cellulose and an outer wall, exine, of resistant sporopollenin. The nucleus divides to produce the pollen tube and two sperms. The tapetum of the anther provides nutrients for the developing pollen, and proteins from it impregnate the exine.

There is great variation in size, shape, type and arrangement of apertures and exine sculpturing in pollen. This is diagnostic to plant family, genus and sometimes species. Wind-pollinated plants vary less than animalpollinated plants.

The commonest type of embryo sac consists of eight cells: an egg with two synergids, three antipodal cells and two that fuse to form a diploid central cell. Other types are known with four or sixteen cells in the embryo sac.

Pollen grains germinate and the pollen tube grows through the stigma and style to reach the ovule. Two sperm cells are discharged: one fertilizing the egg, the other the diploid central nucleus. The embryo is then diploid, but the central nucleus that grows to form the endosperm is usually triploid.

The structure of pollen

A pollen grain is a single cell derived by meiosis (Topic B5) from pollen mother cells in the anther. It lays down two coats, an outer exine and an innerintine. The intine is laid down first and is made of cellulose and pectins. The exine matures soon afterwards and is made of extremely hard polymers of carotenoids known as sporopollenin. It has numerous tiny cavities in its surface and is often beautifully sculptured. Pollen exine is one of the most resistant of plant structures and can survive long after the rest of a plant (including the inner parts of the pollen grain) decays. Inside the pollen grain the haploid cell divides to produce two nuclei: a large vegetative nucleus which will form the pollen tube, and a generative nucleus. The generative nucleus divides again either before dispersal or after it has germinated on a stigma to produce two sperms that travel down the pollen tube.

Before the first division of meiosis, the pollen mother cells of the anther are interconnected by cytoplasmic strands and this may enable all the pollen grains to develop synchronously. Meiosis in these gives a group of four haploid cells (Topic B6) and these four pollen grains may mature and be dispersed together or separately. As the pollen grains mature, proteins from the tapetum of the anther impregnate the cavities of the wall and remain there when the pollen disperses. It is this protein that is involved in the recognition interaction of sporophytic self-incompatibility (Topic H3), and responsible for the allergic reaction of hay fever.

The shape and size of pollen grains varies enormously. The shape varies from spherical to narrowly oblong, tetrahedral or even dumb-bell shaped and waterpollinated grains of the marine grass, Zostera, resemble spaghetti and can reach over 1 mm in length. In animal or wind-dispersed grains the size varies from

5 µm across in, e.g. forget-me-nots, Myosotis, to over 200 µm in some members of the cucumber family, but is usually around 40 µm; wind-dispersed grains are all around 40 µm.

The pollen grain usually has one or more apertures in the exine through which the pollen tube will emerge. This aperture may be elongated forming afurrow, or more-or-less rounded forming a pore. It seems that a single furrow was the first form to evolve, with pores and multiple apertures appearing later in the fossil record. A combination of the number and orientation of pores or furrows and the sculpturing of the exine is diagnostic of plant families, genera or sometimes species (Fig. 1). The exine of pollen that is dispersed by the wind is fairly smooth and in some families, such as the grasses, it varies little. By contrast, in animal-dispersed pollen the sculpturing varies hugely from circular holes to projections of many sizes and shapes and the beautiful window-like form of some dandelion-like composites (Fig. 1). 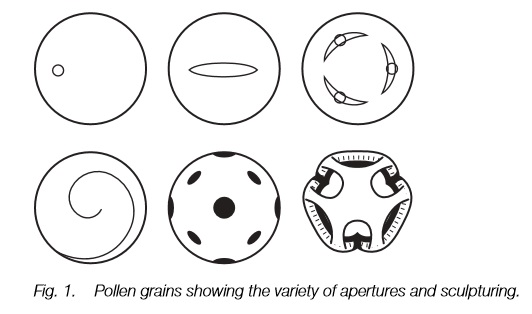 The embryo sac is contained within the ovule (Topic D1) and the most common form consists of eight haploid cells (Fig. 2). Three of these remain at the micropyle end to form the egg and its two associated synergid cells; three

others remain at the other end to form antipodal cells. The two remaining cells, one from each end, fuse to form a diploid central nucleus that will become the endosperm after fertilization. The embryo sac derives from divisions of a single haploid cell, itself the result of a meiotic division in which three of the four cells abort.

The embryo sac described above occurs in about 70% of flowering plants but there are at least 10 other types of embryo sac known, some characteristic of certain families, others within one family or even on the same plant. The total 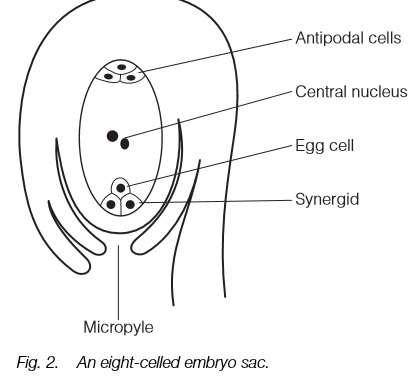 endosperm. The others play no further part after fertilization.

Pollination occurs when pollen grains land on the stigma. If compatible, a pollen tube emerges through one of the apertures of the grain and grows through the stigma and into the style. It follows the transmitting tissue in the center of the style or the inner surface of a hollow style and its progress is marked by deposits of the polysaccharide callose (Topics H3 and M3) behind the growing tip. It can then grow through the ovary and into the micropyle of the ovule (more rarely into the other end). The rate of pollen tube growth is variable, usually around 3–4 mm h–1 but may be up to 35 mm h–1.

Two sperm cells are discharged, either into one of the synergid cells or directly into the embryo sac, and they lose their cytoplasm before one fertilizes the egg cell, the other the central diploid cell that will form the endosperm. The embryo is then diploid, with its cytoplasm derived entirely from the egg, and will grow into the new plant. The endosperm is triploid since the haploid male nucleus fuses with a diploid cell in the commonest form of embryo sac (see above). Other types of embryo sac have diploid or pentaploid (5n) endosperm. In most plants the endosperm grows after fertilization to provide the food store for the developing seed.