Meristems form the new cells of a plant. Apical meristems occur near the tips of roots and shoots and give primary growth. They give rise to the epidermal tissue, vascular tissue and ground meristems that form the parenchyma.

A tissue is a collection of cells with common function. It may be simple or complex. An organ is a multicellular functional unit. Plant organs are made of three types of tissue: dermal, vascular and ground.

The outer most cell layer is known as the epidermis. It is formed of parenchyma-like cells and specialized cells for transport of gases, water and nutrients.

Vascular tissue is made up of xylem and phloem. Xylem carries water and dissolved minerals, and phloem the solutes from sites of synthesis to sites of storage or use. Xylem cells have thickened secondary cell walls and no cell contents. Xylem vessel elements join to form vessels. Tracheids are tapered cells that interconnect via pits. Phloem has two cell types: sieve tube elements and companion cells. Sieve tube elements have no nucleus, but contain organelles and link through sieve plates. Companion cells are narrower than sieve tubes and function with them.

Meristems are the site of formation of new cells within the plant (Fig. 1). Apical meristems occur near the tips of roots and shoots and give length increase(primary growth). They contain initials, the equivalent of stem cells in animals,which retain the ability to divide and generate new cells throughout the life ofthe meristem. They form primary meristems that produce the tissues of thestem and root. These primary meristems are theprotoderm (which forms the epidermis or outer cell layer of the shoot), the procambium (which forms phloem and xylem, see ‘Vascular tissue’ below), and the ground meristems (which form parenchyma). Grasses have intercalary meristems close to thenodes of the stem (the point where leaves attach) which are also responsible for length increase.

Lateral meristems give increase in girth (secondary growth). The vascular cambium (sometimes known just as cambium) is a cylinder of cells that formsnew phloem and xylem (see ‘Vascular tissue’ below). New cells formed by thecambium are termed derivatives, while those that remain to divide again are initials. The cork cambium is a meristematic tissue found in woody plants. It isa cylinder of cells, located beneath the bark, which it forms (Fig. 1).

A tissue is a collection of cells with common function. It may be simple, made of one cell type or complex, made of several cell types. An organ is a collection of tissues with a specific function such as flowers, roots and leaves. Plant organs are made of three types of tissue: dermal (the epidermis or outer cell layer), vascular (transport tissue) and ground (all the remaining cells). The type and quantity of each tissue varies for each organ. 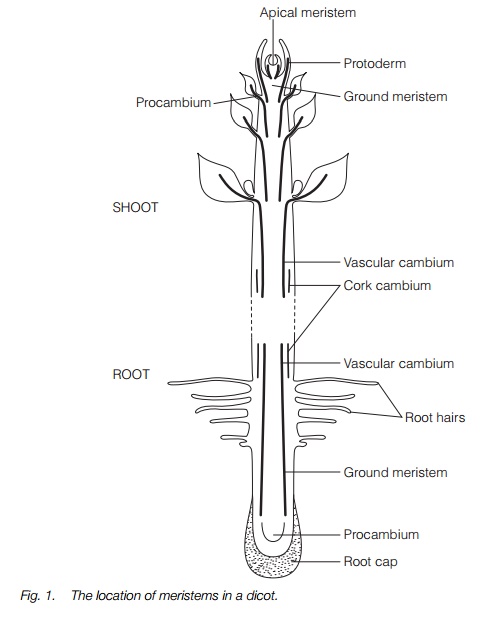 Ground tissues lie under the epidermis and contribute to structural strength and function. Parenchyma cells are the most abundant cell types found throughout the plant and form the bulk of organs such as leaves, roots and stems. They are formed with thin flexible cell walls and are initially cuboid, later becoming nearly spherical or cylindrical. As they form mature tissue, their shape is constrained by surrounding cells. In a typical parenchyma tissue, cells are joined at the points of contact, but there are frequent large intercellularspaces. This means they take a variety of shapes. Parenchyma cells have large vacuoles, and parenchyma are frequently storage tissues for starch and other food reserves and for water. Leaf parenchyma cells are photosynthetic, have chloroplasts and are called chlorenchyma. Aerenchyma is a parenchyma tissue found in some species in which some cells are lost to form large gas-spaces. These promote buoyancy in some aquatic species or supply oxygen to the growing tip of roots in waterlogged soil. Parenchyma cells often retain the ability to divide when the plant is wounded, forming a callus (an amorphous mass of cells; see Topic F1) which fills the wound site and may eventually form new tissues to repair the wound.

Collenchyma is made up of living cells which are similar to parenchyma, but with stronger, unevenly thickened cell walls. Collenchyma cells are often found as flexible support beneath the epidermis of growing tissues and in many other locations, including stems, leaves and fruits. Cotton is a fabric made of plant  collenchyma tissue.

Sclerenchyma is a supporting tissue found in organs which have completed lateral growth. It is made up of dead cells with even, lignified secondary cell walls either in sclereids (small groups of cells) or fibers (long strands of elongate cells). Plant fibers have been widely used in textiles and rope making.

All organs are surrounded by a layer of cells, the dermal tissue that forms aprotective covering, known as the epidermis. It consists of parenchyma or parenchyma-like cells and usually forms a complete covering, except where specialized pores (e.g. for gas exchange; see Topic I2) are present. The epidermis protects the tissues beneath from mechanical damage and pathogens (Topic M4). The root epidermis (or rhizodermis) is specialized for the absorption of mineral nutrients and water (Topics I1 and I4).

Xylem and phloem together make up the vascular tissue, the conducting tissues for fluids through the plant (Fig. 2). Xylem carries predominantly water and dissolved minerals from root to shoot (Topics I1 and I4); phloem carries solutes like sugars and amino acids from sites of synthesis or storage (sources) to sites of storage or use.

Xylem cells have lost their cellular contents, and have unevenly thickened secondary cell walls that are strengthened with lignin. There are two main types of xylem cells. Vessel elements are elongate, open-ended cells which lose their end walls to form continuous pipes (vessels). Tracheids are tapered cells, with overlapping ends and often spiral thickening of the cell wall. Rather than being open-ended, perforations or pits allow water to move from one cell to another. The first formed xylem cells are known as protoxylem. They have helical or annular secondary thickening, so the cells can elongate when stretched by the surrounding tissue. Metaxylem cells form after elongation has ceased and have more complex secondary thickening. Ray cells radiate from the vascular cambium of roots or stems of woody plants and permit lateral movement of water. 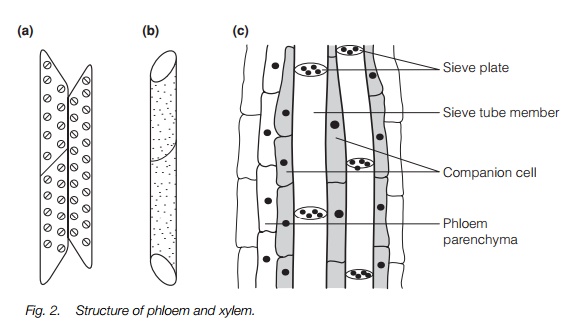 Phloem tissue has two cell types. Sieve tube members form an elongated pipe, the sieve tube. The cells are living and are linked through perforations in adjoining end cell walls (the sieve plate). The cytoplasm of these adjoining cells also connects, and transport of solutes takes place through it (Topic H4). Sieve tube members have no nuclei, but retain other functional organelles. The other cell type is the companion cell, which have many mitochondria and provide energy required for phloem transport.