The cell cycle has two check-points: G2/M and G1/S. Progression through the cycle is controlled by cyclins that are synthesized and degraded through the cycle and activate cyclin-dependent protein kinases (CDPKs).

Meiosis occurs to produce haploid cells. It involves an extra round of cell division. The first phase, prophase to anaphase I, results in exchange of DNA between the pairs of chromosomes followed by their separation with both chromatids present. The second phase (metaphase II to telophase II) is a mitosis resulting in separation of the chromatids and the formation of four haploid cells.

Cell division in plants occurs in meristems (Topic C1) and involves two parts: mitosis in which the chromosomes are replicated and sorted into two nuclei, and cytokinesis in which the cell wall, cytoplasm and organelles divide. In dormant meristems, the cells rest in G0 phase. When conditions are correct, the cell begins the processes leading to division. The entire cycle may be considered as four phases, G1 , S, G2 andM(Fig. 1).

In G1 phase the cell doubles in size and new organelles and materials needed for two cells are formed. During this phase, the nucleus migrates to the center of the cell and is surrounded by a sheet of cytoplasmic strands called the phragmosome that bisects the center of the cell at the plane across which it will divide. The phase ends with the G1/S checkpoint. The process can stop at this point (see Cell cycle control, below), or proceed to S phase in which DNA and associated nuclear proteins are replicated. At the end of S phase the cell contains two full copies of its genetic information. It proceeds to G2 phase when the chromosomes begin to condense and structures required for division form. A distinct band of microtubules (Topic B1), the pre-prophase band, forms around the cytoplasm in a ring where the edge of the phragmosome lay, again predicting the plane of cell division. At the end of G2, the cell has to pass another checkpoint (G2/M) at which stage, if conditions are suitable, it enters M phase in which the cell divides. 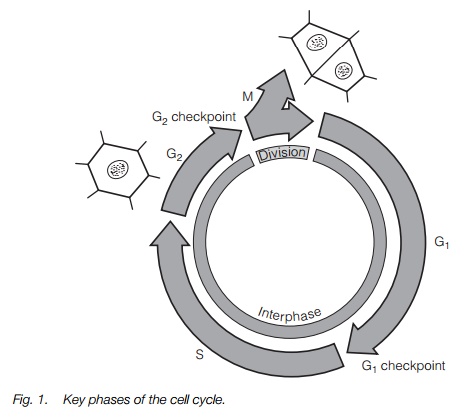 Stages G1 to G 2 are known as interphase. M phase, when division occurs, can be divided into a series of stages that can be recognized by microscopy (Fig. 2 and Table 1).

In meristems (Topic C1), a population of cells characterized by thin cell walls and the lack of large vacuoles are constantly dividing. The daughter cells may undergo a few further divisions, but then lose the capacity to divide and after a phase of cell enlargement generally develop large vacuoles.Plant hormones, 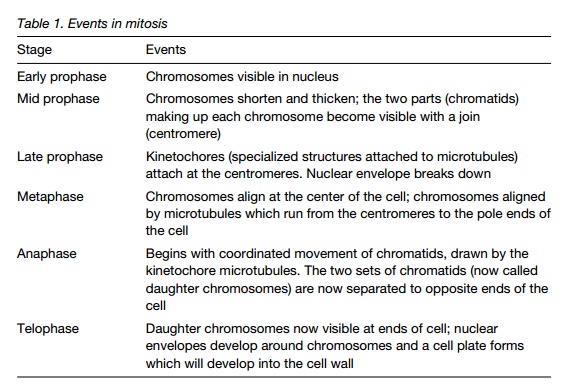 auxin and cytokinin (Topic F2), are known to initiate the cell cycle. Auxin stimulates DNA replication, while cytokinin initiates the events of mitosis. The cell cycle is also controlled by the activity of cell proteins called cyclins and cyclindependentprotein kinases (CDPKs; a kinase is an enzyme which will phosphorylate another protein). One group of cyclins, the G1 cyclins, are manufactured by the cell in G1 and activate CDPKs which stimulate DNA synthesis at the G1/S control point. If sufficient G1 cyclins are not formed, the cell will not progress to S. Having passed this point, the G1 cyclins are degraded and a new family of cyclins, the mitotic or M cyclins are produced. These activate a second set of CDPKs which permit the cell to pass the G2/M control point into mitosis (Fig. 3). 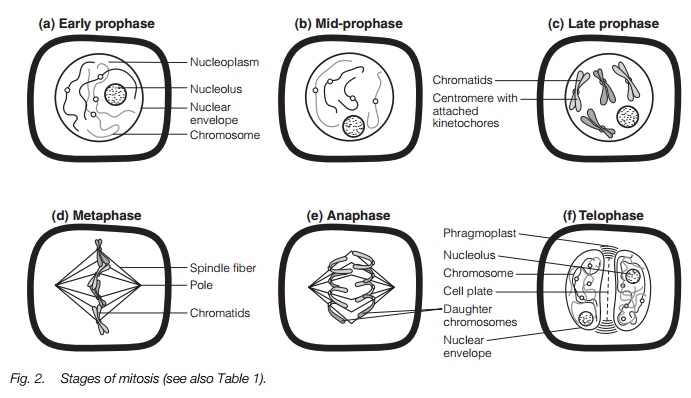 Whereas animal cells which pass G1/S are committed to undergo division, plant cells are not. This means that many plant cells continue to replicate DNA without dividing. This is known as endoreduplication, which is shown by more than 80% of all plant cells and particularly cells with a high metabolic activity and requirement for protein synthesis. 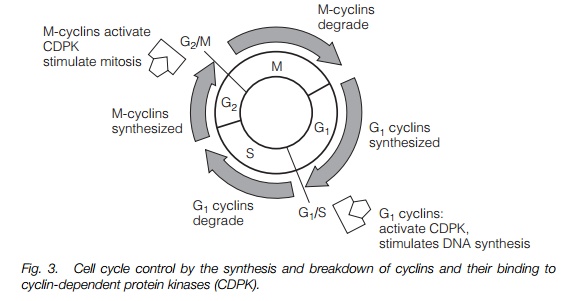 Meiosis occurs in the reproductive tissues of the plant. To do so, it must result in a halving of the number of chromosomes, so that each cell has only one set (haploid, rather than the usual two sets, diploid) of chromosomes. The full complement of chromosomes is restored after fertilization, when the two sets (one from each gamete) combine. In interphase, DNA synthesis occurs and each chromosome exists as a pair of sister chromatids joined by a centromere. In prophase I, the homologous chromosomes (originally from the maternal and paternal generative cells) pair up to give asynaptonemal complex. Each chromosome can be seen to be composed of two chromatids. The chromatids join at points called chiasmata, at which genetic material can cross over from one chromatid to another. This can be between homologous chromatids or between sister chromatids. Inmetaphase I, the paired chromosomes move together at the metaphase plate. In anaphase I, homologous chromosomes, each with its two chromatids, separate to the spindle poles, drawn by microtubules (Topic B1). The daughter nuclei now have a haploid set of chromosomes. Each chromosomehas two chromatids (compare mitosis, where at this stage the chromatids separate so each chromosome has only one). Instead of forming new nuclei and stopping division, the cells go on to another phase of division.

In metaphase II, a new metaphase plate forms in daughter cells and the chromosomes line up at the equator of the cell. In anaphase II, chromatids separate and move to the poles. By telophase II, the chromosomes have completed movement and four new nuclei, each having half the original number of single chromosomes, have been formed.

As only one period of chromosome duplication has occurred, the result is four haploid cells. In pollen formation, all four cells survive; in ovule formation, three normally abort leaving one to form the ovule. The stages are shown 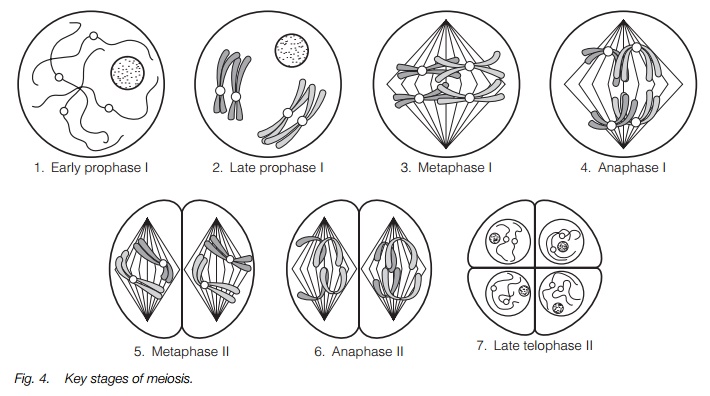