Membranes are made up of a lipid bilayer with membrane proteins. The membrane is a hydrophobic region through which charged or large polar solutes cannot pass unless via a membrane protein. They separate compartments of different composition. Cells contain membrane bounded organelles such as mitochondria and chloroplasts and membrane systems such as the endoplasmic reticulum (ER) and Golgi apparatus

Membranes are made up of a lipid bilayer with membrane proteins. The membrane is a hydrophobic region through which charged or large polar solutes cannot pass unless via a membrane protein. They separate compartments of different composition. Cells contain membrane bounded organelles such as mitochondria and chloroplasts and membrane systems such as the endoplasmic reticulum (ER) and Golgi apparatus

The endoplasmic reticulum (ER) is a system of flattened sacs or tubes of membrane. Smooth ER is the site of lipid synthesis and rough ER of protein synthesis. ER may be associated with the nuclear envelope, but may also be at the cell periphery. Proteins targeted for the ER lumen or membrane bear a signal sequence and are synthesized on ER ribosomes. Subsequently, modification of the proteins may occur before they are exported to other locations by vesicles.

The Golgi apparatus is a system of stacked membrane cisternae. It is a site of protein modification and polysaccharide biosynthesis. Proteins are delivered to the cis face by vesicles and move through the medial cisternae

to the trans face for export by the vesicles of the trans Golgi network (TGN). Enzymes within the cisternae synthesize polysaccharides or modify proteins by glycosylation.

The plasma membrane is a single membrane bounding the cytosol. It generates a trans-membrane electrochemical gradient by pumping protons. It maintains ionic homeostasis of the cytoplasm and transports nutrients and other products. Other plasma membrane functions include: sensing and signaling (receptor proteins); secretion, turgor and communicating with adjacent cells through plasmodesmata.

The tonoplast is a single membrane surrounding the vacuole. It maintains ionic homeostasis of the cytoplasm and transports nutrients and other products by maintaining an electrochemical gradient driven by proton pumping. Vacuoles form from pro-vacuoles formed in the Golgi apparatus. A mature vacuole contains inorganic ions, sugars, enzymes and organic acids. Some contain secondary products.

Biological membranes are made up of a lipid bilayer in which membrane proteins are embedded, either deeply as integral membrane proteins or at the edge as peripheral membrane proteins (Fig. 1). Membrane lipids have hydrophilic head groups and hydrophobic tails that are buried within the membrane, making a hydrophobic domain not readily crossed by charged hydrophilic (polar) substances. This barrier means that the membranes can separate two compartments of different composition. The proteins within the membranes govern the composition of those compartments byselective transport. This may be active (using ATP) or passive (allowing a substance to move from one compartment to another driven by an electrochemical gradient). As well as transport proteins, membranes also contain receptor proteins that transduce signals such as phytohormones, gravity or light; anchor proteins that attach the membrane to the cytoskeleton and cell wall; and enzymes involved in the synthesis or degradation of cellular constituents. 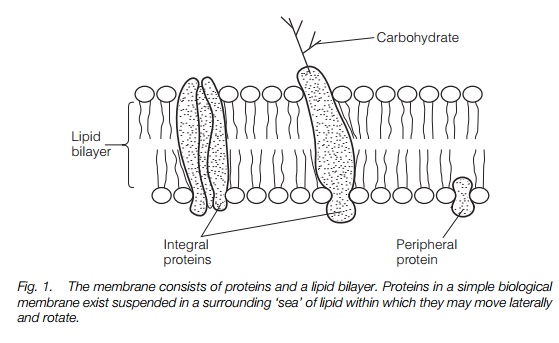 Some organelles are membrane-bounded (e.g. mitochondria and chloroplasts). In other instances, the functional entity is the membrane itself, which may enclose a separate compartment or lumen (e.g. the endoplasmic reticulum and Golgi apparatus). The membranes of the cell may be considered as a more or less complete continuum from the sites of synthesis of new membrane to mature, functioning membranes. Old membrane components are constantly being recycled – removed from the membrane and reprocessed or hydrolyzed. Much of this flow of membrane through the cell occurs invesicles, small sacs of membrane.

The endoplasmic reticulum (ER) is a network of membranes in the cytoplasm that form either tubules (tubular ER) or flattened sacs (cisternal ER). The ER may be divided into two types. Smooth ER is the site of membrane lipid

synthesis and new membrane assembly. Rough ER appears rough due to the presence of ribosomes and is the site of the synthesis of membrane proteins and proteins destined for secretion or insertion into vacuoles. Free ribosomes, not bound to membrane, are the site of synthesis of proteins not associated with membranes. ER may be closely associated with the outer nuclear envelope (NE; Topic B5). The ER lumen and the lumen between inner and outer NE are a continuum. ER may also be separate from the NE; cortical ER, for instance, is located just beneath the plasma membrane. Proteins destined for insertion into the ER membrane or to the lumen bear a signal peptide, a short amino acid sequence targeting the protein synthetic apparatus to its destination. Some simple modifications of protein may occur in the ER – for instance, simple glycosylation reactions in which carbohydrate residues are added to the protein. Further modifications require the protein to be transported to the Golgi apparatus (GA), the next stage in the pathway.

The Golgi apparatus (GA) is made up of a stack of flattened membrane sacs called cisternae, of which there may be only a few or many. Material enters the GA in vesicles, which fuse with the Golgi membranes. The stacks (dictyosome) are polar; new material is added at one face (the cis face) and transported through the medial cisternae to the trans face, from which a network of secretory vesicles, the trans Golgi network (TGN), exports the product (Fig. 2). Two models exist to explain how materials move through the GA; the cisternalmaturation model suggests new cisternae are constantly being added to the cis face, which then gradually mature until released as vesicles at the TGN. The vesicle traffic model suggests that the cisternae remain for the lifetime of a GA with material being moved from cisterna to cisterna by vesicles.

The GA prepares proteins and polysaccharides for secretion. Depending on cell type, it may be more or less dedicated to one or other activity. Enzymes in the GA either synthesize complex carbohydrates, or add carbohydrate groups to proteins (glycosylation). The cis, medial and trans GA contain different enzymes which progressively modify the material passing through. At the end of the process, material for export is sorted and packaged in secretory vesicles, which move to their membrane destination before fusing with it and discharging their 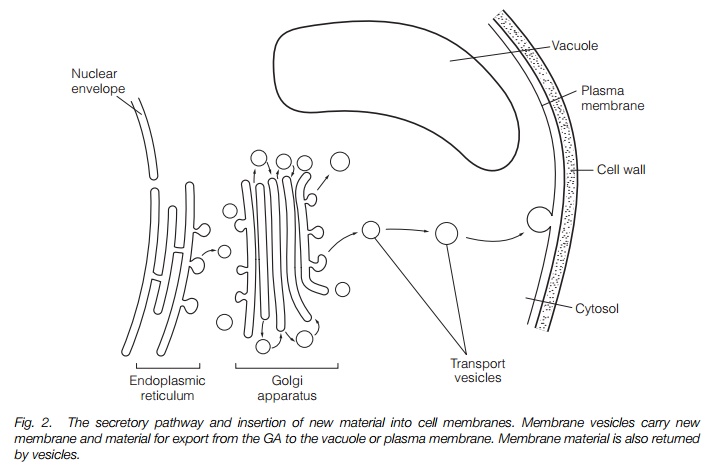 (i) maintaining ionic homeostasis of the cytoplasm and transporting nutrients and other products. To do this, a trans-membrane electrochemicalgradient is maintained, driven by a proton-pumping ATPase (which uses the energy of ATP to transport protons across the membrane; Topic I3). Many other proteins located in the membrane transport ions and other molecules;

(ii) sensing and signaling the cells environment. Receptor proteins at the plasma membrane respond to the presence of signals (e.g. hormones) and cause changes in intracellular signaling molecules which result in altered

(iii) secreting materials (e.g. the constituents of the cell wall; Topic B2);

(iv) regulating turgidity by osmotic effects resulting in the cytoplasm exerting force against the cell wall;

(v) communicating with other adjacent cells through plasmodesmata (Topic B1).

The tonoplast is a single membrane surrounding the vacuole (Topic B1). Like the plasma membrane, the tonoplast has a role in maintaining ionic homeostasis of the cytoplasm and in transporting nutrients and other products. A transmembrane electrochemical gradient is maintained, driven by aprotonpumpingATPase (Topic I3). The tonoplast also contains other transportproteins which regulate the ionic homeostasis of the cytoplasm and vacuole. A mature vacuole contains inorganic ions, sugars, enzymes and organic acids. Specialized vacuoles may contain complex organic compounds (secondary products; Topic J5), long-term storage products such as proteins or organic acids involved in carbohydrate metabolism.