Structure of Plant Nucleus and genome

The nucleus is bounded by a double membrane, the nuclear envelope, which is perforated by nuclear pores that permit the movement of materials from the interior of the nucleus (nucleoplasm) to the cytoplasm. The genetic material (DNA) is present as a DNA–protein complex known as chromatin. The nucleolus is the site of synthesis of the ribosome subunits.

Structure of the nucleus

The nucleus is bounded by a double membrane, the nuclear envelope, which is perforated by nuclear pores that permit the movement of materials from the interior of the nucleus (nucleoplasm) to the cytoplasm. The genetic material (DNA) is present as a DNA–protein complex known as chromatin. The nucleolus is the site of synthesis of the ribosome  subunits.

Structure and function of chromatin

The DNA double helix is entwined around histone proteins in units called nucleosomes, packed together to give a 30-nm fiber of chromatin. Genetic information is contained within the DNA as codons. Genes are made up of a structural region encoding the protein to be synthesized and promoter regions that control gene activity. In transcription, the

DNA untwines and RNA polymerase II copies it as an RNA strand. Nontranscribed introns are removed giving messenger RNA (mRNA) which is translated into protein on ribosomes.

Chromosomes are made up of tightly packed chromatin. Chromosomes in dividing cells have two chromatids joined at a centromere. Endoreduplication results in many copies of each chromosome, while gene amplification results in multiple copies of a few highly used genes. Polyploid cells have more than the usual number of chromosomes; normally only polyploids with an even number of chromosome copies are fertile as they can undergo chromosome pairing in meiosis.

Structure of the nucleus

Each living plant cell contains a nucleus separated from the cytoplasm and other organelles by a double membrane, the nuclear envelope (Topic B4). The size and prominence of the nucleus varies depending on the major functions of the cell. Cells in meristems (Topic C1), which are to undergo cell division, have a large nucleus. Other cells, such as those of the parenchyma (Topic C3), have a smaller nucleus, with most of the cell occupied by the vacuole (Topic B4). The nuclear envelope surrounds the fluid nucleoplasm. Movement from nucleoplasmto cytoplasm is possible through complex protein structures, the nuclearpores, which span both membranes. Nuclear pores are complex multi-protein structures that regulate movement into and out of the nucleus; their most important function is to permit messenger RNA (mRNA) molecules and ribosomes to leave the nucleus. Within the nucleus, the DNA is entwined with proteins, the DNA–protein complex being termed chromatin. In interphase, the chromatin appears to be spread throughout the nucleoplasm; in mitosis, however, it condenses to form distinct chromosomes.

The nucleolus is often seen as a densely stained region in micrographs of the nucleus. It is the center for the synthesis and assembly of components ofribosomes, structures involved in protein synthesis. Ribosomes are exported from the nucleus where they function to synthesize proteins either free in the cytoplasm or attached to membranes like the outside of the nuclear envelope or the rough endoplasmic reticulum (Topic B4).

Structure and function of chromatin

DNA in the nucleus is associated with protein in a complex known as chromatin. The basis of chromatin is a double helix of DNA; this entwines around proteins called histones. Stretched out, the structure resembles beads on a necklace. Each ‘bead’ of DNA and histone is known as anucleosome. An additional histone protein binds to the DNA, and causes an additional level of coiling. This results in the DNA–histone ‘beads’ packing closely together to give a 30-nm fiber of chromatin. This fiber then forms loops along a protein scaffolding. In metaphase (Topic B6), additional coiling and close-packing gives rise to highly condensed chromosomes.

The genetic information of the cell is contained within the DNA in the form of codons: triplets of nucleotides which encode an amino acid or indicate the start or finish point of each gene. Each gene is made up of two regions: a structuralregion which contains the information for the amino acid sequence of the protein and which is copied (transcribed) to mRNA when the gene is active and a promoter region which controls whether the gene is transcribed (Fig. 1). A single gene may be regulated by a number of factors, such as hormones and factors specific to where the cell is, for instance the root or shoot. Between the structural and promotor regions lies a sequence rich in adenosine and thymidine (A and T) known as the TATA boxwhich is important in binding the enzyme that synthesizes mRNA. Genes contain regions which will be transcribed to mRNA (exons) and regions which will not (introns). Several (or many) introns may be found within one gene.

In order for a gene to be transcribed, the DNA double helix must unwind over a short region. RNA polymerase II commences copying a short distance from the promoter region, then moves along the gene and copies the DNA template as an RNA strand. The RNA strand contains a transcription of both introns and exons. Introns are then removed to form the mRNA which migrates out of the nucleus via the nuclear pores to be translated into protein at ribosomes.

Plant chromosomes, which become clearly visible under the microscope in mitosis, are made up of tightly packed chromatin. When visible in this way, the chromosomes have passed through the S-phase of the cell cycle (Topic B6) and so a copy of the DNA has been synthesized by DNA polymerase. This remains attached so that the chromosomes have two chromatids joined at a centromere (Fig. 2). 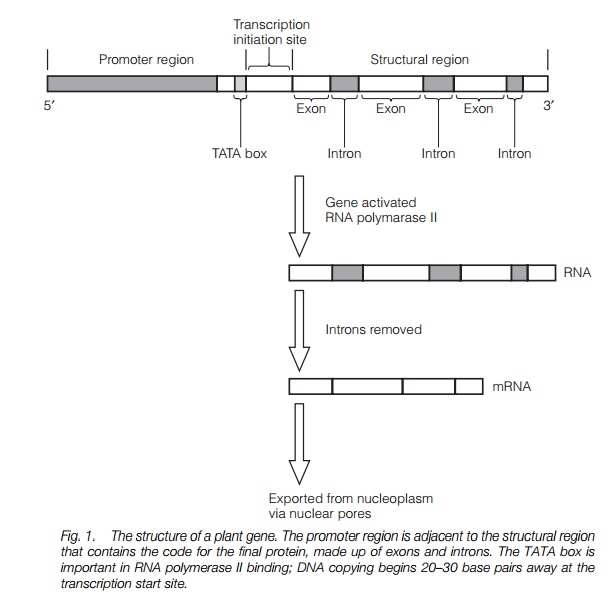 Normally during cell division, each daughter cell receives a copy of the entire genetic information of its parent. At this point, the cell could cease synthesizing DNA and go on to differentiate; however, most plant cells go on to generate further copies of their genes in a process known asendoreduplication (Topic B6). In some instances, gene amplification results in multiple copies of a few highly used genes being made. If a gamete is formed by cells which have not undergone meiosis (Topic B6), the resultant cell has two sets of genes present (it is diploid). If it is then fertilized by a normal (haploid) gamete, the resulting offspring is triploid (has three sets of genes). In plants, this is frequently nonlethal and plants may showpolyploidy, that is more than one copy of each chromosome. Plants with an even number of copies are fertile, such as hexaploid wheat (six copies), while those with an odd number are normally sterile as they cannot undergo pairing of homologous chromosomes during meiosis.