This section presents bitmap and vector graphics and discusses how they complement each other to deliver comprehensive graphics capabilities across a variety of applications.

This section presents bitmap and vector graphics and discusses how they complement each other to deliver comprehensive graphics capabilities across a variety of applications.

Bitmaps are made up of a rectangular matrix of pixels. These pixels are assigned integer values that determine their state. The state of a pixel determines its shade of gray or color in a grayscale or color bitmap image, respectively. For example, Figure 12.1 shows a simple bitmap with a diagonal line composed of a set of dark pixels. 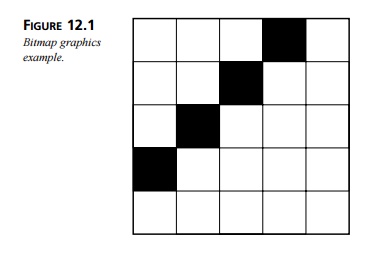 Aside from photographs, many other applications lend themselves better to an alterna-tive graphical representation, called vector graphics. In this representation, graphics are composed of graphical primitives, including lines and text. For example, Figure 12.2 shows a simple vector graphics diagram with a diagonal line defined by its start and end-points (sx,sy) and (ex,ey), respectively. This is the vector diagram equivalent of the bitmap diagram shown previously in Figure 12.1. 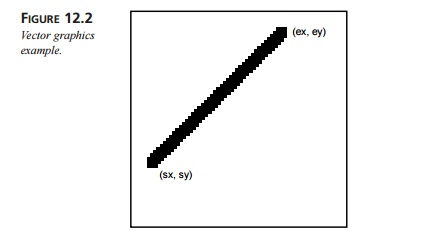 Vector graphics information is kept symbolic rather than in a flat pixel format. Vector graphics files are typically represented in a text format, such as XML, and are therefore easily editable using a simple text editor. Because information is kept symbolic in vector graphics, these types of graphics may be easily manipulated. This makes them well suited to interactive applications. Examples of manipulations that are easily achievable with vector graphics include scaling, rotating, and panning. Furthermore, scaling does not result in pixelation (or “blockiness”), as is the case with bitmap images, when one zooms in too far. Instead of representing graphics in a flat, exhaustive format like bitmap graphics, which without compression has the same size regardless of content, vector graphics more efficiently represent graphics from graphical elements. Consequently, vec-tor graphics may be very efficiently represented and are therefore easily stored and downloaded. In a Web application, this leads to faster client response time, less network and server load, and less storage requirement on the server side.

It is notoriously difficult to extract meaning from bitmap graphics. Vector graphics, on the other hand, contain primitive elements, including text from which meaning may eas-ily be extracted in an automated fashion. This is particularly true of XML-based vector graphics formats, which not only leverage the power of vector graphics but also the standard well-formed structure of XML that enables them to be processed efficiently, robustly, and in an automated fashion. Bitmap graphics are difficult to reduce. In extract-ing subsections of bitmap graphics, users are typically forced to use simple rectangular cropping. On the other hand, you can easily reduce the vector graphic by identifying and extracting the primitives that constitute the desired subsection of the graphic.

Raster displays, such as those used for televisions and computer monitors, are made up of a matrix of pixels. Therefore, bitmap images may be readily displayed on them, in some cases with subsampling or supersampling to change their size. Vector graphics, on the other hand, don’t define the pixels to be displayed directly but rather how to compute them from a set of primitive graphics elements, including lines and text, for example.

Photos are best represented in bitmap format, typically with either lossless or lossy com-pression. Most other types of graphics are best represented as vector graphics. However, due to the early Web browser support for bitmap formats (in particular, GIF and JPEG formats), most Web content does not make use of vector graphics, even in applications traditionally dominated by vector graphics (for example, mapping). A good example of this are the map Web sites, such as MapBlast (www.mapblast.com) and MapQuest (www.mapquest.com), that enable users to retrieve and view maps in bitmap format over the Internet. Due to the use of bitmap graphics, a simple manipulation such as zooming in on the map results in a new request to the server and a whole new image being down-loaded. In contrast, the use of vector graphics in such applications would enable such transformations to be achieved on the client side without further server requests. One of the main reasons for the use of bitmap graphics in these types of applications is the lack of vector graphics formats widely supported on the client side, such as by the major Web browsers. SVG promises to address this issue by delivering the power of vector graphics in a widely supported standard XML-based format that may be easily applied to power a variety of interactive graphical applications on the Internet. Although the previous clear distinction drawn between bitmap and vector graphics is convenient from a conceptual standpoint, in practice they are not mutually exclusive. For example, vector graphics may be composed of graphical primitives, including embedded bitmap image subcomponents. On the Web and across all practical graphical applications, bitmap and vector graphics will be used together as well as in combination with each other in various hybrid forms.